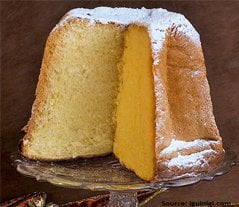 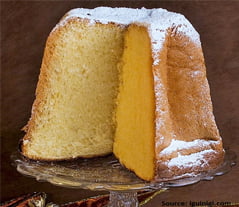 Christmas time is a moment that gather all the family. In Italy, our tradition is to reunite all the parents around a table, where eating and laughing are the main activities. Beside Panettone, Pandoro is one of the most common dessert during the festivities.

Pandoro is a sweet yeast bread composed with flour, sugar, butter and vanilla. Usually is served with powdered sugar on top or with Chantilly cream as a side. Pandoro is shaped like a frustum, with an eight star section. Pandoro is combined in many occasions with desserts wines to strengthen its sweetness and its flavor .

There are different stories about the origins of Pandoro. Somebody said that Pandoro is a result of a different preparation of the Pan di Vienna (literally "bread of Vienna"), a particular soft bread realized in Vienna between 1700 and 1800. Others think that is originated from the "Pan De Oro" (in American English "bread of gold") a bread that was usually served for specials occasions and for rich people in Venice. But the most probable story about the origin of Pandoro, is the one which said that Pandoro is derived  from the Nadalin, a typical star shaped cake of Verona, usually prepared in the Christmas period, in a very similar way and almost with the same ingredients.

Verona in Italy is considered the capital city of Pandoro. Either for the story of the Nadalin cake but also because Verona is the city where Domenico Melegatti obtained the permission to produce the Pandoro industrially. Domenico was the founder of one of the greatest confectionery company of all Italy.

So every Italian and every visitor or tourist, during the Christmas period, can delight his palate with this soft and tasty sweet yeast bread that represents an example of the mastery of the Italian confectionery.