Located in Southern Italy, stretching along the Tyrrhenian Sea, Campania is a region that captures the very best of what Italy has to offer. From striking seaside cliffs and white sand beaches to a wealth of ancient history and rich culture, Campania houses some of Italy’s most highly regarded destinations. A land known for its lush, fertile landscapes and celebrated worldwide for its amazing climate, Campania offers stunning natural views at every turn. Home to unparalleled historic ruins, parts of the region serve as a unique snapshot of ancient Italian life. From the coastline inward, Campania is warm, inviting, and intriguing, making this region the perfect destination for your unforgettable trip to Italy. 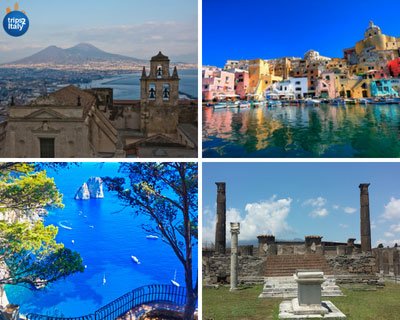 Covering 5,250 square miles, Campania has Italy’s third largest population, boasting 5.8 million people. The provinces that comprise the region are Caserta, Avellino, Benevento, Salerno, and the capital, Naples. With its gorgeous islands, miles of coastline, and borders that span from the Gulf of Policastro to the mouth of the Garigliano River, Campania is a region heavily characterized by water.

In addition to crystal blue waters, the region is proud to offer numerous UNESCO designated World Heritage Sites, including the Royal Palace of Caserta, the Historic Center of Naples (which is the largest in Europe), the Archeological areas of Pompeii/Torre Annunziata/Herculaneum, The Amalfi Coast, the Monumental complex of Santa Sofia, and the Cilento/Paestum/Velia National Park.

Along with endless stretches of coastline, the region is also home to amazing hills and mountains. While areas of plains can be found within Campania as well, mostly along the Garigliano and Volturno Rivers, around 51% of Campania is covered in rich, rolling hills and the region shares part of the Apennine Mountain range. So iconic is the landscape here that the region's name derives from the Latin Campania felix, which means fertile countryside.

In addition, Campania is home to unique volcanic landscapes unlike anywhere else. Campi Flegrei, otherwise known as the Phlegraean Fields, is a regional park located west of Naples that consists of 24 volcanic edifices and craters. Ischia Island, located off the northern end of the Gulf of Naples, is a volcanic island that has unparalleled beauty. The presence of thermal waters in both locations, due to the volcanic activity, makes them ideal destinations for spa and wellness centers. These centers offer thermal therapy using the areas’ naturally occurring steam jets and hot springs.

The most notable volcanic formation in Campania, and perhaps all of Italy, is Mount Vesuvius, the legendary volcano which caused the destruction of the ancient city of Pompeii as well as Herculaneum. A symbol of Naples, this volcano is widely considered to be the most dangerous active volcano today, due to the dense population of residents who live nearby and the volcano’s frightening history of violent eruptions.

Thanks to the region’s large amount of volcanic activity, many gulfs have formed along the coast of Campania, including the Gulfs of Naples, Gaeta, Salerno, and Policastro. The volcanic activity over the centuries also created one of the world’s most renowned archipelagos, the Campanian Archipelago. Comprised of five islands, Procida, Vivara, Nisida, and, most notably, Ischia and Capri, the Campanian Archipelago is among the star attractions of the Amalfi Coast.

As a primarily coastal region, the climate of Campania is ideal for enjoying the lush scenery and sea views nearly year-round. Characterized as being very temperate throughout much of the year, Campania experiences cold temperatures during the winter, primarily in the interior parts of the region. When exploring any part of the region’s 215 miles of coastline, a temperate climate can be expected for most of the year. 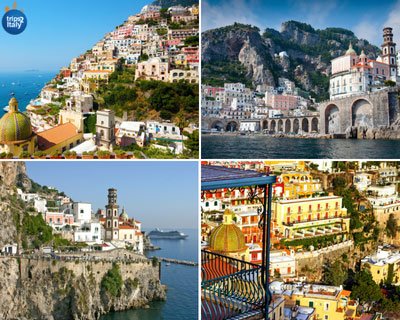 The crown jewel of Campania is the unparalleled Amalfi Coast, known to locals as La Costiera Amalfitana. One of Campania’s UNESCO World Heritage Sites, this 30 mile stretch of coastline nestled against the Mediterranean Sea is an outstanding example of the wonders that Campania has to offer. The coast's name derives from the city of Amalfi, which was once a great Maritime Republic in the company of Pisa, Genoa, and Venice. Now it is known as an idyllic travel destination, serving as the scene of unforgettable getaways for royalty, celebrities, and tourists alike.

Starting south of Sorrento and ending at Salerno, the dramatically gorgeous Amalfi Coastline stuns with steep cliffs that plunge into the sapphire waters below. Dotted by charming and colorful fishing villages, the coast serves as a seaside vacation retreat as well as an immersive experience into the charming everyday life of the locals. Along the Amalfi Coast, towns such as Amalfi and Positano are perched atop coastal cliffs, allowing for an unforgettable view of the sea and coasts beyond. Aptly referred to as “The Land of Sirens,” those who have the chance to experience the Amalfi Coast firsthand are charmed and mesmerized, solidifying Campania as a once-in-a-lifetime region to see.

Similarly, the Campanian island of Capri serves as an attractive destination within the region. As if straight from a postcard with crashing blue waves against the soft, white sand, the atmosphere of the coast comes alive amidst the scent of fresh citrus trees nearby. Located in the Bay of Naples, the Island of Capri is a fusion of rugged, natural landscapes, ancient ruins, and modern, upscale luxury. From first-class dining and shopping to historic sites, Capri brings the best of both five-star and historic experiences.

Also a pride and joy of Campania, Naples is a province characterized by lively locals, bright colors, an energetic culture, and vast history. As one of Europe’s most densely populated cities, experiencing Naples is truly an adventure. With its signature charming, narrow streets, locals bustle through the city, purchasing food and other authentic goods at crowded street markets and admiring ancient churches and structures that have called Naples home since medieval times. Many neighborhoods in Naples, such as the Quartieri Spagnoli, part of the historic center, and the Lungomare, a promenade along the Gulf of Naples, are areas that truly represent the heart and soul of the city. 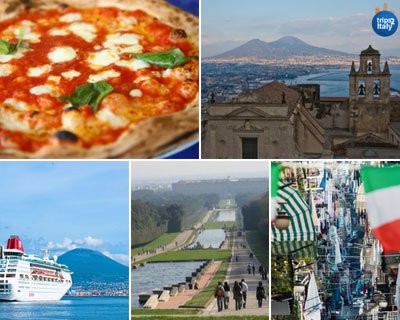 With countless cafés, restaurants, and bars, Naples has no shortage of ways to taste and experience the city. More than any other city in Campania, Naples holds a deep passion and love for coffee and espresso. Valued as highly as a deep art or religious tradition, the ritual of coffee is a defining aspect of the culture of Naples. Another valued culinary treat? Pizza. Naples is considered to be the birthplace of pizza where the traditional rules of pizza making were established. Here, pizza is comprised of simple, fresh ingredients, namely tomatoes grown on the slopes of Mount Vesuvius, mozzarella di bufala, type 0 or type 00 flour, basil, and extra virgin olive oil. Like coffee, pizza is a deep, important part of the culture of Naples.

Looming over Naples, ominous and active, the great Mount Vesuvius serves as a reminder of the region’s turbulent history. The eruption of Mount Vesuvius in 79 AD marked the desolation of the ancient towns of Pompeii and Herculaneum. As two of the world’s most iconic historical sites, the remains of Pompeii and Herculaneum provide the richest insight we have today into the daily lives of the Ancient Romans. As a result of the burning pumice stone from the volcano’s massive eruption, both towns were completely destroyed, yet perfectly preserved under a subsequent layer of volcanic ash. Both breathtaking and heartbreaking, the ruins of these Ancient Roman cities, which include homes, frescoes, and even human remains, serve as a way to remember those who were lost, and even more so, a way to honor the legacy of their culture.

From the mountainous volcanoes and hills that make up Campania’s inland areas to the awe-inspiring sea cliffs that look out upon the Mediterranean coastline, this region of Italy exposes the true beauty of nature. The locales housed within Campania’s borders—the Amalfi Coast, Naples, the Island of Capri, Sorrento, and beyond—have become synonymous with spectacular views and deeply enriching cultural experiences. It is no wonder why Campania is widely regarded as one of Italy’s most popular regions. In terms of experiencing a wealth of Italian history and a first-hand look at the wonder of Italy’s coastal landscapes, there is no better place to visit than Campania.

The Campania Region of Italy

The Cities of Campania: