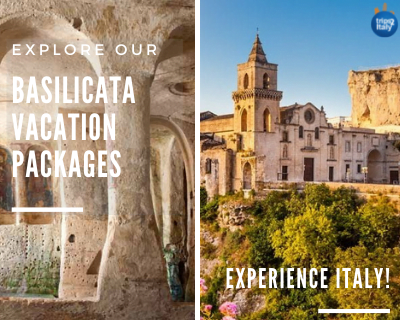 Those hoping to tour the romantic and tradition-steeped lands of Italy need look no further than the grandiose sights of Basilicata, a treasure trove of beauty. As one of the less populated regions of Italy where nature is wild and untouched, the area is home to some of Mother Nature’s finest handiwork with the majestic snow-capped Apennine Mountains, two separate beachside views, and gorgeous winding rivers that hug the base of the mountains. Home to only 600,000 people spread out over two provinces, much of the land is largely pristine and untouched, as if frozen in time.

Basilicata is comprised of the provinces of Potenza and Matera. Potenza is both the regional capital of Basilicata and one of the highest provincial capitals in Italy, offering breathtaking views of the sparkling Basento River in the Apennine Mountains. Matera, on the other hand, is steeped in history as it is considered to be one of the oldest continuously inhabited cities in the world. In fact, even as sparsely populated as Basilicata is, The Sassi and the Park of Rupestrian Churches of Matera, a rock-cut complex of houses, monasteries, churches, and hermitages built into the natural caves, boast human occupation from several millennia ago to the present day. This rich cultural architecture and longevity make the area one of the most important UNESCO World Heritage Sites.

Locals affectionately call the Basilicata region Lucania in honor of the Lucani, an Oscan tribe that inhabited the area starting in the 5th century B.C.

Due to heavy emigration during the nineteenth and twentieth centuries that caused a demographic crisis, the territory never developed a strong infrastructure system, making it truly a land of its people.

The congenial charm of its people combined with the picturesque mountains and sprawling beaches tucked away at the southern tip of the country, make the region a rare find, with The New York Times ranking Basilicata as Italy’s best kept secret and number three on their list, “52 Places To Go In 2018.” 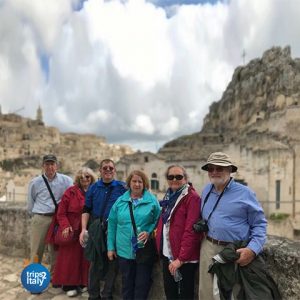 Rolling hills and plains comprise less than a quarter of the region. Metaponto, a major plain, is positioned between the Bradano and Basento rivers off the Ionian coast. The plain is a major attraction for tourists, particularly in the summer because of nearby seaside resorts. The area features both a modern village and a historical archaeological area famous for its ruins, which include Tavole Palatine, the remains of an ancient 6th century BC Greek temple, and the National Archaeological Museum of Metaponto.

The region is considered the most mountainous region in the south of Italy, accounting for the remaining three-quarters of the total landscaping in Basilicata and showcasing the Monte Alpi, Monte Carmine, Dolomiti Lucane, Monte Pollino, and Monte Vulture mountains. The climate in the mountains changes with the seasons, providing cold continental weather and snow in the winter, generally warm temperatures in the spring and summer, and frequent rains in the fall.

Together, the mountains and precipitation give way to a bevy of gorgeous lakes and rivers found throughout Basilicata. Two of the most popular lakes amongst tourists are often called “The Vulture Twins.” Lago Grande (Big Lake) and Lago Piccolo (Small Lake) formed in the craters of an ancient volcano, Monte Vulture, that is now extinct, making the two lakes divided only by a thin strip of land surrounded by thriving vegetation. A unique network of tributaries joins the Bradano and Basento rivers, allowing them to flow and flourish throughout the region.

For tourists wanting a change of pace from mountain life, Basilicata offers not one, but two coastal beaches. The Ionian beach on the east is a draw for families with alluring white sand, clear and shallow water, and a nearby forest. The area offers plenty of fun activities along the Lido di Metaponto, including sailing. The Tyrrhenian Coast in the west is a bit of a paradox with the mountains just behind a gorgeous beach. The area offers a trail of gorgeous scenery and attractions, including exploring plunging cliffs, stunning coves nestled among the rocks, and mysterious sea caves. The Port of Maratea is one of the more popular spots on the Tyrrhenian Coast because of the fishing and nature excursions it offers. Both coastlines offer public beaches as well as private areas for a more intimate and secluded experience.

Much different from the climate in the mountains, Basilicata’s beaches offer a mainly Mediterranean climate that is warm in the spring, hot in the summer, breezy in the fall, and cooler in the winter. The ideal weather makes the coastal areas a year-round favorite for locals and tourists alike.

Matera is often the focal point for those visiting Basilicata. Aside from being home to The Sassi and the Park of the Rupestrian Churches of Matera, it was declared as the European Capital of Culture for 2019. This designation allowed Matera to be the Italian host for a series of cultural events with a pan-European dimension for that particular calendar year.

In line with this cultural award is Matera’s history and future in cinematography. Both Mel Gibson’s The Passion of the Christ and Patty Jenkins’ Wonder Woman were filmed in part here. The ancient-looking scenery found in The Sassi is beloved by many filmmakers, particularly for biblical motion pictures.

Unique to the area is Craco, a commune and ghost town found in the Province of Matera. The town is uninhabited due the devastating effects of several landslide and earthquakes that caused an exodus of residents that left so quickly, the city remained nearly exactly as it was. The picturesque town sits high upon a rocky summit that is in stark contrast with the soft shapes surrounding it on the hillside below. The atmosphere of the ghost town is both eerie and incredible, making it one of the most unique experiences in the region.

The pristine sea and 20 miles of untouched beaches on the west coast have an unparalleled beauty, earning Maratea the name, “The Pearl of the Tyrrhenian.” The city is also home to The Statue of Christ the Redeemer of Maratea, the third largest statue of Jesus Christ in Europe. The steel, marble, and concrete statue is just shy of seventy feet tall, with an arm span of more than sixty-two feet wide from fingertip to fingertip. This work of art is in one of the most unique locales of Italy and is a revered statue, particularly by locals, who believe the statue watches over them from its perch on the rocky hillside.

Basilicata is truly one of the country’s finest but lesser known gems, offering snow-capped mountains, warm beaches, rich history, cultural tradition, and more that make it an absolute must see for your next trip to Italy.