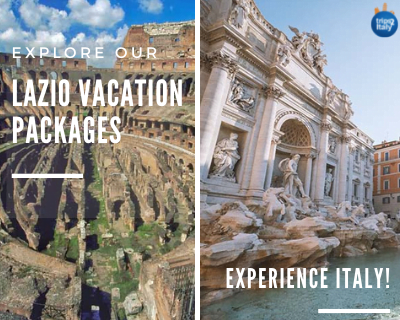 Lazio can be described as the heart of Italy, not only because it is centrally located but also because it is home to Italy’s capital city of Rome and the Papal State of Vatican City.

Located along the Tyrrhenian Sea, this region is historically one of Italy’s most important areas. At one time, the Roman Empire was the largest and most influential world power, and the most incredible remnants of it can only be found in Lazio. In addition, Lazio is home to the vast area of Tuscia – a UNESCO World Heritage Site that holds the history of the ancient Etruscans via its various necropolises, tombs, and other historical ruins. Given the region’s vast history, Lazio is aptly named, because the term is derived from the Latin word latus, meaning “extensive.”

Between having the presence of the Italian government, featuring so many relics of world history, and being the center of the Roman Catholic Church, the region has beckoned tourists for decades. Though with a population of over 5 million inhabitants – more than half of which reside in Rome itself – Lazio proves to be as popular a place for locals as it is for tourists.

Bordering Tuscany and Umbria to the North, Marche, Abruzzo, and Molise to the east, the Tyrrhenian Sea to the West, and Campania to the South, Lazio is a region that comprises over 6,000 square miles.

The geography of Lazio is mostly hills, but there are also a fair amount of plains and mountainous sections throughout the region. Along the edge of Lazio’s Western border with the Tyrrhenian Sea are miles of coastline, complete with sandy beaches and stunning archipelagos such as the Pontine Islands. The region features a variety of wonderful sea towns, including the white sanded Sabaudia, the sparkling waters of Sperlonga, and gorgeous Gaeta.

The region is marked by volcanic activity of the past. Throughout the region are several volcanic lakes, including the majestic Lake Bolsena, famous for islands such as Bisentina and Martana, and Lake Bracciano, which features the Odescalchi castle. Also in Lazio are volcanic areas such as the Alban Hills (Colli Albani) and the mountain range Monti Volsini.

Running through the region of Lazio is the infamous Tiber river, often hailed for its historic and cultural value. The river, which is 252 miles in length, begins in the Apennine Mountains of Emilia-Romagna and flows through Lazio – nearly cutting the region in half. It passes through the Eternal City of Rome and empties into the Tyrrhenian Sea. The Tiber has been the subject of many Italian legends and Ancient Roman mythological stories.

As for the climate of Lazio, it is mostly considered Mediterranean – particularly in coastal areas and on the plains. Travelers can expect hot, occasionally humid Summers, temperate to warm Springs, rainy and cool Autumns, and cold Winters. The further one travels from the coast, into the more hilly and mountainous section of the region, the more the climate will cool down, especially in the Winter. In these parts of the region, which are typically described as somewhat Alpine, expect freezing Winters with occasional snow.

When traveling to Lazio, one must visit Rome. The most popular travel destination in Italy, Rome is also the most historic. At every turn, travelers will enjoy admiring stunning historic monuments, incredible museums, iconic fountains, bustling squares, and more. It simply is not a trip to Lazio without visiting the epicenter of Italian culture, architecture, and history – Rome.

As if Rome was not enough history, a visit to Tuscia will surely satiate any history buff’s thirst for more. This area, located in the province of Viterbo, is the cradle of the Etruscan civilization. The secrets of this mysterious civilization lie in the area’s necropolises, ancient ruins, and tombs. In addition, there are outstanding views of nature to enjoy.

For a completely unique experience, visit Tivoli – a charming town that was built at the incredible waterfalls of the Aniene river. The city offers travelers a panoramic view of the Roman Campagna as well as three amazing villas to explore and admire - Villa Adriana, Villa D’Este, and Villa Gregoriana.

For a trip filled with water sports and lakeside relaxation, visit Lake Bolsena. Featuring black beaches, lovely lakeside towns, and wild, untamed natural areas to explore, this famous lake destination allows travelers to enjoy everything from windsurfing and sailing to exploration of the lake’s natural islands.

Regardless of where one visits, every traveler who has the pleasure of seeing Lazio simply must enjoy the region’s incredible and savory cuisine. Of all the regions of Italy – each of which features their own unique styles of cooking – Lazio’s dishes are some of the most indulgent of all. From the appetizer of fresh and salty cold cuts to iconic pasta dishes such as Pasta alla Carbonara and Pasta all’Amatriciana to the tremendous white wines and sweet desserts, foodies will revel in one of kind local delicacies throughout Lazio.

Emily worked with us for the perfect trip. Our pre-vacation planning session was helpful to lessen any anxiety on what to expect when arrivi

Thank you for a wonderful planned precruise tour of your beloved Rome. We were able to walk or take the Hop On Hop Off everywhere we wanted

"Both Michael and I had a really terrific time in Italy. I would like to thank Trips2Italy for the wonderful Bottle of champagne that was se