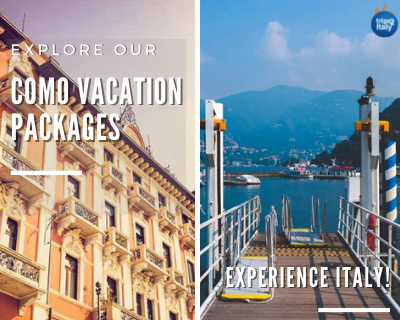 In Northern Italy, not far from the border with Switzerland, sits one of the crowning jewels of the country, the city of Como. For decades this city has been a popular destination for many travelers because of the sparkling blue waters of Lake Como, the majestic mountains of the Alps, and the innate beauty of this charming quintessential Italian city. Como transports visitors to a paradise that seems to literally slow down time and fill the mind with wonder at the city’s natural beauty.

Despite having a population of more than eighty thousand, Como has a lovely small town feel to it. Living quarters, shops, and businesses are knit tightly together along the shore of Lake Como. As you wander around the city, savor walks through gorgeous piazze and down cozy cobblestone streets where beauty awaits at every turn. Behind the city, the lake gives rise to the wooded mountains which provide breathtaking scenery. With this stunning scenic background and a number of historic churches, theaters, museums, and art, it is no wonder Como is frequently one of the most visited cities in the Lombardy region.

Despite its relatively small square footage compared to that of neighboring giants such as Milan, the city is home to a strong education system, including a music conservatory and university. In addition to being a quiet place of respite for the rich and famous hoping to escape the daily pressures of life, the area has a strong outdoor sports presence with dozens of water and hiking-based recreational activities popular with visitors, such as sailing, windsurfing, and trekking.

The hilly and mountainous areas near Como are thought to have been inhabited since the Bronze Age, and some remains of those settlements are still visible. After these early civilizations, Como was settled by the Romans, then the city changed hands many times falling under the dominion of the Visconti family and others, until finally becoming part of the unified Kingdom of Italy.

If you are traveling to the city of Como, the main ways to arrive are by air and rail. If traveling by air, the closest international airports are Milan Malpensa and Milan Linate. From the airport, the best way to reach Como is by car, either via rental car or private driver. If traveling to Como from another part of Lombardy or Northern Italy, the railway service is a convenient way to reach Como. With its proximity to Lake Como, boat and seaplane transportation may be accessed for traveling to other lakeside cities.

Once you have arrived in Como, you will most likely wish to see much of the city on foot or bicycle so that you can wander the charming streets, piazze, and shoreline at your leisure. That said, one of the most popular transportation activities for travelers in Como is the funicular. This cable car ride connects the lakeside city of Como with the small village of Brunate, which sits perched on a mountain more than two thousand feet above sea level. Boats and seaplanes are primarily used for water and air-based exploration of Como and the surrounding areas.

Regardless of how you choose to take in the sights and sounds of the delightful city of Como, the people and the natural beauty are sure to capture your heart.

The city of Como is part of the Italian region of Lombardy and is the capital of the eponymous province. Located on the far southern tip of the western branch of Lake Como, this small city of less than twenty square miles is surrounded with stunning beauty courtesy of some of Mother Nature’s finest works.

This natural respite is roughly thirty-five miles away from Milan and also shares a border with the country of Switzerland, making it an attractive stop for European tourists. Between the picturesque mountains of the Alps and the enticing waters of Lake Como, this city truly offers something for everyone.

There may be a handful of Italian towns that have an operational funicular as a mode of transportation, but Como’s scenic ride up to the village of Brunate and back down again is simply hard to beat. As you slowly climb the side of the mountain to the village and clear the tunnel, the sparkling blue waters of Lake Como and the charming town of Como come into view. The higher the climb, the more picturesque the view becomes. It is a fabulous way to get an aerial picture of the town and lake, all while seated comfortably for the trek uphill.

It is worth noting that if you hear a loud boom around the hour of noon, there is no need to fret. It is somewhat of a tradition to fire a cannon loaded with blanks to mark the noon hour. If you are riding on the funicular to Brunate at that time, it may sound even louder as the cannon may actually be closer. It is located midway between the city of Como and the mountain village of Brunate.

Como and the Lake Como area have long been known for their production of silk, which can be traced all the way back to the sixteenth century. Silk spinning became an economic powerhouse for the area, especially when Pietro Pinchetti founded the silk textile school. While today Como’s silk production is on a much less grand scale due to foreign competition, there are museums in the area that detail the historic production of silk fabrics from dyeing to weaving. The best part about visiting a city with a history of producing silk is the one of a kind gorgeous and authentic souvenirs to be found in local shops.

From the awe-inspiring nature and rich history to the iconic architecture and vibrant culture, the city of Como is a classic destination set along the radiant shores of Lake Como. With old churches, elegant villas, and magnificent parks, it is easy to understand how such a place continues to live on in the hearts of its visitors, even long after they left.

First of all, THANK YOU for the most incredible trip we have ever taken! I cant say enough great things about the locations you

Thanks for setting up a wonderful trip. You were on target with suggestions and everything flowed smoothly. It was nice to get a flavor of m

" To Tommaso and the Staff of Trips 2 Italy,Our recent trip to Italy was fantastic. The Lake Como region is as beautiful as we imagined. On

The Lombardy Region of Italy

The Cities of Lombardy, Italy