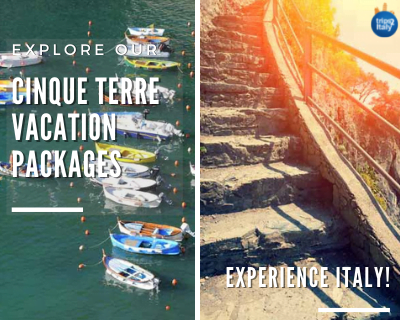 The Italian area called the Cinque Terre has a known history dating back to the 11th century. While often fighting off pirates in those early years, villages were developed one by one as a part of the Republic of Genoa. The village of Monterosso was first, followed by Vernazza, Manarola, Riomaggiore, and Corniglia. Today each of the "five lands," as the name Cinque Terre translates, has its own unique landscape and contributes to what makes the area a highly desired destination. The most distinct characteristic of these villages would be the miles and miles of terraces that hug the cliffs. This painstaking endeavor, built up over centuries of constant care, is the perfect example of man adapting to nature with the ultimate goal of preservation. From the cuisine and culture to the architecture and magnificent views, this mountainside retreat has something for everyone.

Cinque Terre's chain of quaint villages can be found in the Northern Italian region of Liguria between Genoa and La Spezia. Its sandy beaches, climbing terraces, and miles of connecting trails sit on the coastline overlooking the Ligurian Sea, along the Italian Riviera.

The secluded setting of the Cinque Terre adds to the calm ambiance the villages have to offer its locals and visitors alike. Away from the hustle and bustle of the larger cities in Italy, the Cinque Terre area is best reached by train. Cars are not used within the villages, and each village has its own train station, allowing transport between the villages themselves as well larger cities such as Genoa and Milan. The villages can also be reached by sea via ferry or private yacht.
In the late 1990s, the Cinque Terre villages were recognized not only as a UNESCO World Heritage Site, but also as National Parks and Protected Marine Areas. These recognitions ensure the area will maintain its cultural heritage, healthy sea life population and natural beauty respectively.

From the beginning of their history, the landscape and people of the Cinque Terre have seen their share of ups and downs. While they have suffered devastating natural disasters and early attacks by pirates, the area has also seen the construction of the railroads and overall growth in crops and other natural resources. Despite the obstacles they have had to overcome, each of the five villages has its own historic elements and growth that continues today.

• Monterosso, meaning "red mountain" is the largest, most northern village of the five. It is divided into the old town and the new, modern part of town with the Aurora Tower, a sixteenth century guard tower, and pedestrian tunnel running in between. The older portion is home to colorful terraced homes, a large sand beach, and the ruins of castles and watchtowers. The newer side, known as Fegina, is the village's hub of tourist activity with hotels, restaurants, a beach, and shops.

• Vernazza is known for its breathtaking atmosphere and is recognized as one of Italy's most beautiful villages. Its terraced groves of olive trees overlook the village's main street and Piazza Marconi. The historic Doria Castle, which dates back to the 11th century, watches over the town. Vernazza is home to Cinque Terre's only natural harbor, providing a means for ships to arrive and depart for Genoa and international destinations. This accessibility has provided the village with prosperity and power for centuries, which is evident in the visual details and commercial activity that still exist today.

• Corniglia, the middle village, is smaller in size and offers a calmer atmosphere than the others. It is located 328 feet above sea level and is the only village without direct access to the Ligurian Sea below. While its lack of coastal land does limit the ways in which to access the village, Corniglia offers unique routes by foot. A more than 350 step stairway, called Lardarina, connects the village center to its train station, providing access to the other villages. With shorter homes similar to those found further inland, the village is bordered by terraces and thriving vineyards.

• Manarola is said to date back to the 13th century. Its terraces of vineyards, olive, chestnut, and lemon trees that were introduced to the area continue to be cultivated today. The grapes grown there are used to make Cinque Terre's Sciachetrà wine. Like Vernazza, Manarola is recognized as one of the most beautiful Italian villages. Its brightly colored homes, quaint village square, and restaurants and shops can be found along the rolling highs and lows of the landscape. While there is not a beach in this village, a small port and deep water swimming are available on the waterfront. Manarola is especially breathtaking during December and January as a large nativity scene consisting of over 300 characters constructed of repurposed materials is displayed and illuminated across the hillside.

• Riomaggiore can be found on Cinque Terre's southern end. Located in the valley of Rivus Maior, the village was built atop a river, which now runs under the main road through town. The railroad tracks divide the area into two sections. The lower portion borders the sea and has a fishing village atmosphere. The rocky beach and seafood cafes are a draw for visitors. With little flat land, the upper portion is geared towards agriculture with rising terraces full of olive trees and vineyards. Riomaggiore is home to the well-known walking path known as Via dell'Amore, or "Street of Love." The romantic trail runs along the coastline between Riomaggiore and Manarola. Though this particular path closed for renovations following a 2012 landslide, it is scheduled to reopen in 2023.

The five fishing villages that make up Cinque Terre are located in Northern Italy in a subtle coastal cove between the Mediterranean and the rugged hills that overlook the sea. They run north and south along the Italian Riviera between the cities of Genoa and La Spezia. The villages of Monterosso, Vernazza, Corniglia, Manarola, and Riomaggiore make up the Cinque Terre National Park and cover roughly 15 square miles, or 39 square kilometers. There are approximately 1.25 miles between each village, with a total distance of about 6 miles from end to end, if measured in a straight line.

Due to its surrounding terrain, the climate of the Cinque Terre is on the mild side with minimal variations in temperature throughout the year. The steep cliffs shelter the area from high northern winds, while the coastline provides relief during the winter months. Typically sunny and warm, the villages experience regular rainfall during the spring and fall. Temperatures peak during July and August, bringing dryness to the landscape, which is helpful in grape development.

ONLY IN CINQUE TERRE

While the Cinque Terre are small in area, must-see sites abound for visitors of all ages. From the stunning footpaths and coastal views to the timeless architecture and village squares, there are many aspects of these secluded Italian gems that lure travelers to the area for the majority of the year.

The numerous ancient footpaths throughout Cinque Terre are a draw for many visitors. With other means of travel at a minimum, the trails not only provide access to each village, they also offer spectacular views of the majestic coast and colorful architecture.

The romantic Via dell'Amore is one section of the larger Sentiero Azzurro, or Blue Trail, which is 7.5 miles long and connects all of the Cinque Terre villages. The path is favored among visitors because it is fairly easy with mostly flat terrain and it offers plenty of stunning panoramic views. The Sentiero del Crinale n. 1 or Sentiero Rosso, Ridge Trail #1 or Red Trail, is well known among the more experienced. Extending from Portovenere to Levanto and sweeping over the five villages, this former mule track is nearly 25 miles in length. Following the coastal ridge, the full path can take up to 12 hours to traverse from start to finish. Due to its length, the path is best approached in portions with many taking advantage of the rest stops located along the path.

The village of Monterosso is home to the statue Il Gigante, or The Giant. This 45-foot-tall sculpture of Neptune, the god of the sea was constructed in 1910 by two men - Arrigo Menerbi, a sculptor and Francesco Levacher, an architect. The immense concrete depiction is located between the village's harbor and Fegina beach next to the terrace of a historic villa. Though bombing during World War II and decades of rough seas have greatly damaged the imposing statue, it continues to stand as one of Monterosso’s fascinating landmarks.

The Cinque Terre area of Liguria is one of Northern Italy’s most popular destinations, winning the hearts of visitors with its extraordinary charm, rich history, natural beauty, and exquisite art and architecture. The discovery of Cinque Terre’s soul is an astounding journey through time and scenery.

Hi Tommaso, As we come to the end of our time in Monterosso, I would like to thank you and the rest of your team for looking after us so wel

The Liguria Region of Italy

The Cities of Liguria, Italy