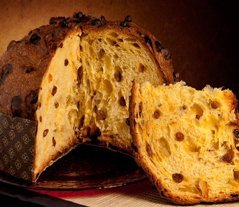 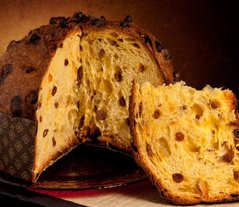 Panettone is a sweet bread loaf which is typical of the Italian culture. This sweet bread is a must on every table on Christmas time but also on the New Year Eve. It has a shape like a cupola with a cylindrical base. It contains a lot of different ingredients like raisins, candied orange, citron and lemon zest, but many different varieties are available with creme and chocolate. The Panettone is originally from Milan, in Lombardy, and now that has became, a so spread habit, in all Italy it is produced in an industrial way, but tasting the original one baked by one of the master artisans in Milan is a still a different experience.

Around the birth of the Panettone there are a lot of stories, traditions and legends. One of the most renowned is the one of Ughetto. Ughetto was a falconer who was fallen in love with the beautiful daughter of the baker, Adalgisa. He didn't know how to catch her attentions and his family did no take so kindly this relation. So he decided to renounce to his work and started working in the bakery which in that moment was not going so well. So, with his strong intention to stay near to Adalgisa and solve the problems of the bakery, he created with the best flour available, eggs, butter, honey and raisins a particular bread so tasty that was a huge success. So the happy ending was that Ughetto married Adalgisa and the bakery continued to bake those fabulous sweet breads, later called Panettone.

Another interesting legend is the one called "The legend of little Toni". The story says during the period of the duchy of Ludovico, all the court was gathered on 24th of December to celebrate Christmas. After an amazing and huge banquet, all the court was waiting for the dessert. But the cake which was prepared by the chef was burned into the oven. So, all the people in the kitchen were scared about the possible reaction of the duke for such an embarrassing situation. But a scullion, named Tony, said to the chef that for himself and his friends, with the left overs of the burned cake, he had created a sweet bread with sugar, raisins and candied citrons. Toni offered it to the chef, who did not hesitate to bring that strangely shaped cupola to Ludovico and the court. With its taste and its smell, the creation of Toni was really appreciated. The chef, in the first instance, took the merit of that special creation, but after, the truth came up. So from that moment that sweet bread was called "Pan di Toni" (Toni's bread).

Another story is the one of the nun Ughetta. Ughetta wanted to make something special for her sisters during the Christmas period. In that moment the convent was very poor and her intention was to create a cake for her greedy sisters. So she prepared a cake and with a knife, she made a cross over the surface of that cake. She baked it, and like a magic, the cake was raised very much and where there was the cross, the cake became shaped like a cupola.

In Italy, the Panettone is, beside Pandoro, the cake of the festivities that every Italian have bitten at least one time in their lives.