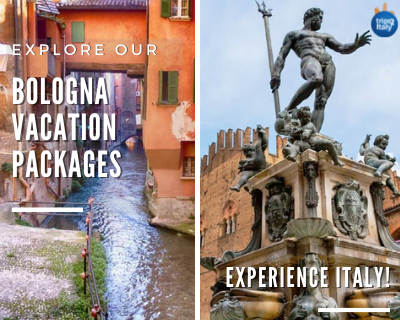 Tucked away among the hills of Emilia-Romagna is one of Italy’s most beautiful and historic cities—Bologna. Though Bologna is not always included in typical itineraries when traveling to Italy from abroad, this gorgeous, ancient city is truly one-of-a-kind. Perhaps the city’s three nicknames best summarize what makes Bologna so unique: “La dotta” means “the learned one” and is a nod to the historic University of Bologna, “La grassa” means “the fat one” and refers to the area’s amazing cuisine and excellent gastronomy, and “La rossa” means “the red one,” which signifies the uniform red coloring of local buildings and their roofs, as well as the red of local motor vehicle manufacturers Ferrari and Ducati.

With sublime architecture, outstanding cuisine, and rich culture, Bologna should be at the top of your list if planning a visit to Italy.

Bologna is not only the capital of Emilia-Romagna, but it is the largest city in the region as well. Greater Bologna is estimated to have a population of approximately one million people, whereas the city itself is estimated to have a population closer to three hundred ninety thousand. For many centuries this city has proved to be among the most highly populated and urban areas in Northern Italy.

Bologna has a rich history that traces all the way back to 1000 BC. Throughout the centuries, the city flourished under different historical regimes including the Holy Roman Empire, the House of Bentivoglio, and the Papal States. During World War II, the city became a target due to its status as an industrial center as well as its railways that easily connected with the rest of Italy. For those reasons, the city suffered substantial damage during the 1940s with almost half of the city’s buildings being destroyed, hundreds killed, and thousands more injured. After the war, Bologna experienced a rejuvenation and restoration process that resulted in the reconstruction of the city.

The historic center of the city is considered to be among the most extensive in Italy and is known for its two leaning towers (Asinelli and Garisenda), ancient churches, and porticoed streets. The center is home to Medieval, Renaissance, and Baroque monuments that are highly reflective of the culture thriving within the city at different periods in time. Bologna was declared the European capital of culture in 2000 and was designated as a UNESCO City of Music in 2006.

The University of Bologna is considered to be the oldest continuously operating university in the Western world, dating back to 1088. With such a long history, the University of Bologna has been associated with some of the best scientific and literary minds, including Nicolaus Copernicus, Guglielmo Marconi, Dante Alighieri, and Petrarch, among many others. As such, the University of Bologna has served as a significant point of reference for European culture throughout history. The historic campus is beautiful and boasts a large student population that gives the campus and much of the city an open and modern feel. In addition to the main campus of the University of Bologna, the city is also home to private institutions like the Bologna Center of the Johns Hopkins University School of Advanced International Studies (SAIS). The college of music known as Conservatorio Giovanni Battista Martini and the fine arts academy Accademia di Belle Arti di Bologna are also a draw for students.

In keeping with this modern feel, the city is home to a number of sports teams encompassing basketball, soccer, and rugby. Bologna is sometimes called Basket City due to the achievements of its two rival basketball clubs that are historically referred to as Fortitudo and Virtus. The local soccer team, Bologna F.C. 1909, won seven Italian League Championships from the 1920s to the 1960s. Local rugby team Rugby Bologna 1928 is thought to be the oldest Italian rugby union club still in operation.

With the city serving as a gathering place for students, locals, and travelers, transportation is well covered. Bologna is a key railway and motorway hub for much of Italy and it is home to the Guglielmo Marconi International Airport, which is among the top ten busiest airports in Italy. Even more important is the Bologna Centrale railway station, which serves 59 million passengers annually thanks to its central position along the east to west lines and the north to south lines. As for transportation within the city, locals primarily travel by foot, ride a bike, or take advantage of the public buses and trolleybus lines.

Bologna is a city in the center of the Emilia-Romagna region, which is located in Northern Italy. The region is the sixth largest in Italy and is home to nine provinces. While the metropolitan area of Bologna is quite large in population, it contains roughly a quarter of the population of the entire region.

Bologna sits along the edge of the Po Plain that lies at the bottom of the Apennine Mountains where the Reno and Savena River valleys meet before flowing out to the Adriatic Sea. The city is approximately 170 feet above sea level and is just outside the drainage basin of the Po River.

In contrast to the rolling green hills outside the city, Bologna’s Roman heritage largely dictates the winding maze of buildings and streets inside the city limits. The roads and streets follow the grid pattern typical of Ancient Roman settlements. Of the estimated one hundred eighty medieval defense towers that once stood tall in Bologna, only twenty or so remain. The most famous of these are thought to be the Due Torri (Asienelli and Garisenda) which lean slightly and together have become a symbol of the town.

Much of the area experiences a semi-continental climate. The summers are mostly warm and clear with temperatures reaching a high in the upper eighties (Fahrenheit). Winters can be quite cold and cloudy with temperatures bottoming out in the low thirties (Fahrenheit). While the summers are typically dry, it is not unusual for the area to experience rain off and on during the fall, winter, and spring. Winter snowfall in Bologna is mostly rare, though it has occurred in the past.

The interesting sights of this thriving city in Northern Italy are seemingly never ending, with an abundance of beautiful architecture, rich history, and vibrant culture. That said, there are several key monuments unique to Bologna that should not to be missed.

One of Bologna’s most defining characteristics as a city is the series of porticoes found in the historical city center that span twenty-four miles. The porticoes allow passersby to walk long distances in the city while being sheltered from the environmental elements. Admired by the likes of Stendhal and many others throughout history, during your visit to Bologna be sure to take time to wander these beautiful porticoes, discovering the city’s treasures along the way.

Piazza Maggiore has been the heart of Bologna for centuries and it is the city’s most renowned square. The piazza boasts impressive Medieval and Renaissance architecture, and while much of the square is home to former administrative and government buildings, it also houses one of Bologna’s top sights: the Basilica of San Petronio. High above the entrance gate of Palazzo D’Accursio, the former town hall, is a statue of Bologna native Pope Greogry XIII, which is believed to continually bless those passing by. The Palazzo del Podestà, a former seat of local government dating back to 1200, is beautiful with its many arched entryways and windows. While gorgeous during the day, Piazza Maggiore is simply stunning at nightfall when the buildings light up and glow softly against the dark sky.

The northwest portion of Piazza Maggiore opens up to Piazza del Nettuno, where the Fountain of Neptune, another symbol of the city, watches over the square. This interesting statue is thirteen feet high, earning it the nickname of Il Gigante or Al Zigant in the local dialect. The statue was commissioned by the church to serve as a symbol of the power of recently elected Pope Pius IV. Local students in the area take note of a legend that says if they walk around the fountain in a counterclockwise motion twice, they will pass an important exam.

Perhaps one of the most thrilling experiences is to climb the Asinelli Tower, part of the Due Torri. Asinelli Tower is located in the Piazza di Porta Ravegnana and stands over three hundred fifteen feet tall. The series of wooden staircases leading to the top of the tower have almost five hundred steps. It goes without saying that good walking shoes are a must for this activity, and please take note that this activity does require advance reservations. The trip to the top of the tower is considered by visitors to be more than worth it when they see Bologna in all its glory down below.

Another characteristic that makes Bologna unique is its position as gateway to the “Food Valley.” In the hills outside of Bologna, some of the most delicious culinary products in the entire country are made following centuries-old traditions, including Parmigiano-Reggiano, Prosciutto di Parma, and Aceto Balsimico di Modena. Inside the city limits of Bologna, travelers will find countless local shops and restaurants where the city’s own best culinary offerings can be tasted, including mortadella, tagliatelle alla bolognese, tortellini, lasagne, and much more.

To visit Bologna is the quintessential Italian experience. The town is constantly brimming with life and activities that make it modern and unique in so many ways. Whether you are dining on the legendary cuisine at local restaurants, touring the winding streets and uniform red-roofed structures of the city, or simply enjoying the people watching and ambiance of Piazza Maggiore, Bologna will both inspire and energize you with a love for Northern Italy.

We had a great time in Italy and overall were very happy with all the tours, etc. As far as logistics, all the drivers

Hi Tomasso,(I just received your e mail and it occurred to me that I never sent this note which I had written a week or so ago..)Just wanted

We fell in love with Italy, the local passion, history, the ease to move around and food / wine / gelato / pastries / espresso!ASSISI tranqu

The Emilia Romagna Region of Italy

The Cities of Emilia Romagna, Italy