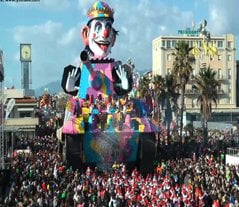 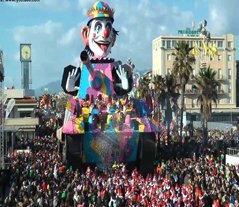 Travel to the Northern part of the Tuscan coast and you will find a beautiful town called Viareggio. As it sits on the coast, this charming seaside town began as a medieval fishing village, and later became known for its shipbuilding. One of the main attractions of Viareggio occurs during Carnival, which is the period of fun and feasting before Lent.

The story of the Viareggio Carnival dates back to an afternoon in February, 1873. Some of the young, well-to-do townspeople were sitting around an open-air café, discussing the idea of creating a parade of floats that would be the finest and grandest in the world. They would be built of wood, plaster and woven rope and modeled by the village sculptors, carpenters and ironmongers.  From that year on, the Viareggio Carnival has become one of the largest and most important carnivals, both in Italy and around the world.

The influences of the Viareggio Carnival are a mosaic of cultures and personalities which have evolved over time. It is customary to wear masks and fancy clothing, and at night, everyone dances in the streets and celebrates.  The artistic floats passing through the streets are named “corsi mascherati”. They are incredibly colorful and grand in their designs. Each one has its own theme, making fun of politicians, or satirical representations of Italian current events and issues. People who see them for the first time are usually impressed by their size; they are often taller than the buildings along the promenade and, because of their craftsmanship, many take an entire year to build.

At one point in 1931, it was decided that the Carnival needed an official mascot. Uberto Bonetti, a painter and designer who studied at the Accademia di Belle Arti in Lucca, entered the competition, creating a clown-like figure with a red and white outfit inspired by the traditional colors of the umbrellas on the beaches of Viareggio. This figure was chosen as the winner and the name Burlamacco, derived from the nearby Burlamacca River, came eight years later. To this day, Burlamacco remains a feature of the carnival and there is a statue of him all year round on the promenade in Viareggio.

Once television became popular in the 1950s, the broadcasting of the Viareggio Carnival has been widely viewed.  Year after year, a long line-up of renowned guests, such as politicians, sportsmen and show business personalities gather together in Viareggio to admire their effigies in papier-mâché.

It has grown so broad in its popularity that since 2002, it has also been called the Italian and European Carnival. Every year during a four- week period just before Lent, day and nighttime celebrations take place. So if you find yourself in Tuscany during Carnival season, make sure to include Viareggio on your must-visit list. Between the star gazing, the townspeople and, of course, the amazing floats, it is a spectacle to behold!

And to think it all started with an idea…and a village.