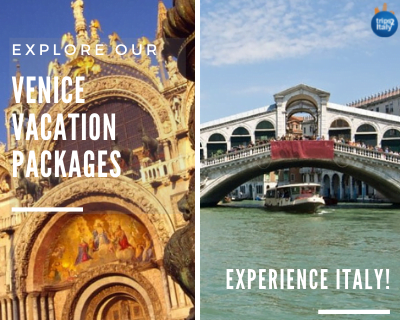 No trip to Italy would be complete without a stop in one of Italy’s crown jewels, it is no wonder why people have been flocking to Venice for centuries. With emerald canals that flow in place of bustling city streets and a labyrinth of complex alleyways crisscrossing over the entire city, it is a city that truly has to be experienced firsthand to be fully appreciated. Having been depicted in countless photographs, paintings, films, and television shows, there is something to be said about taking in this grand city in person. When standing on one of Venice’s 435 bridges and admiring the iconic gondolas which transport passengers from one end of the city to the other, there is an almost dreamlike quality to the moment. With closed eyes, take a deep breath in, pausing to listen to the gentle sounds of the canals’ lapping waters. This is Venice.

With over 400,000 inhabitants, Venice is a group of almost 100 small islands sitting in a lagoon. Hence the iconic and fairytale-like maze of canals that made the city famous. The city and its lagoon were named a UNESCO World Heritage Site in 1987, citing the artistic and architectural achievement of this “floating” city and the rich history of the area.

There is no doubt that some of the world’s most influential and impactful forms of architecture call Venice home, including the church of Santa Maria della Salute and Torcello’s Cathedral. 84 bell towers of varying heights can be seen along the skyline of Venice, with some of them leaning like Pisa’s tower due to their foundation on the water. The mere existence of the city given the natural landscape is a testament to humans’ ability to coincide and thrive with nature.

As for the city’s history, the story of Venice is a prestigious one, as it was once one of the most important Maritime republics of the 10th century. The city was founded when populations of Venetian people took shelter on the region’s many islands to escape raids by Barbarians. Eventually, the people became permanent residents and the city of Venice became a maritime power. Over the centuries, Venice has defended itself against being overtaken by many groups of people – Arabs, Genoese, Ottoman Turks – and maintained its position as one of the greatest medieval republics.

It is this long, sturdy history and magnificent presence that has led to the various nicknames such as La Serenissima(the most serene), La Dominante (the dominant), and La Perla dell’Adriatico (the pearl of the Adriatic Sea).

Located in the Veneto region of Northeast Italy, Venice is a group of over 100 land masses in the shallow Venetian lagoon, an enclosed bay located between the mouths of the rivers Po and Piave. As the capital of the Veneto region, Venice is divided into six major boroughs, or sestrieri. They are San Marco, San Paolo, Dorsoduro, Cannaregio, Castello, and Santa Croce. Each of these sestrieri have their own identity, customs, flavors, and views of the floating city. Of the over 100 islands that comprise the region, some are still considered wild areas and others – Murano, Burano, Torcello, Giudecca, San Lazzaro degli Armeni, and San Giorgio Maggiore – stand out as important areas on their own.

Being located in a lagoon, the primary connection between these various boroughs are water channels and canals. The main waterway, the Canal Grande (or Canalazzo), is the Venetian equivalent of a major highway, as it splits Venice in half and is the main channel to travel on to view the best that Venice has to offer.

However, it is not just the canals that makes Venice’s infrastructure unique. The city is also known for its numerous, winding, and narrow streets. Italians call the streets of Venice calli, meaning “path,” as opposed to the general Italian term for streets, vie, mainly because the roadways in Venice are sized more like tiny walking paths than standard roads. In fact, the narrowest street in Venice, the Calletta or Ramo Varisco, is only 53 cm wide.

As for Venice’s climate, it is described officially as humid subtropical, meaning visitors can expect very warm summers and cool winters. Because of its location in the Northern part of Italy, the Autumn and Winter seasons can bring fog, rain, and cold temperatures. Spring offers great weather, including mild temperatures and soft breezes, while Summers can be warm. For those hoping to snap beautiful photos of Venice’s canal views, professional photographers and locals alike prefer to visit the city during Fall and Winter, as the visual wonder of fog floating among the canals is unparalleled.

Because of its unique location on the water, another weather event, Acqua Alta, or high water, is another striking visual. These unusually high tides submerge much of the historic center of Venice during the rainy season. It gives the illusion that the city is sinking or even floating. The Venice government is working on a series of barriers that will help prevent this event by 2019.

It is enchanting to explore the floating city by foot. With the vast number of bridges, channels, architectural wonders, and calli to explore, walking is, by far, the ideal way to give Venice the attention it deserves.

While exploring Venice, one cannot miss the essential and iconic bridges, which connect various parts of the city and offer spectacular views. The Rialto Bridge, considered by some to be the heart of Venice, is the oldest bridge on the Grand Canal and one of the city’s most iconic sights. Meanwhile, the Calatrava Bridge is one of the most recent bridges in Venice. A stunningly sleek and modern feat of architecture, this bridge was designed by famous Spanish architect Santiago Calatrava. The Bridge of Sighs is another bridge not to be missed. The enclosed bridge has a gorgeous view of the city, and was the final bridge walked by convicts before they were to be imprisoned. It was given its name by Lord Byron, due to the implication that prisoners would sigh at the beauty and wonder of their final sight of Venice from the bridge.

After a long walk exploring Venice’s many bridges, many enjoy a break at one of the city’s popular bacari, or small taverns, in which locals enjoy drinks such as white wine and snacks such as bruschetta, or cicchetti, with fresh toppings.

Following their break, many head to the famous Piazza San Marco, otherwise known as St. Marks Square. It is home to the main attractions of the city and is hailed as the religious, social, and political center of Venice. It is the location of the world-famous St. Mark’s Basilica, which boasts stunning architecture and religious history. Right next to St. Mark’s Basilica is Doge’s Palace, an iconic piece of Venetian architecture which is home to many wonderful pieces of artwork as well as the the adjacent prison that convicts would cross the Bridge of Sighs to get to. Also in the square are the St. Mark’s Clock Tower and the San Marco Bell Tower.

A trip on the water is the perfect way to experience the outlying islands. Take a vaporetto, or a water bus, to islands such as Murano, home to the world’s best glass masters, Burano, which boasts an array of bright, colorful houses perfect for photo taking, or San Giorgio Maggiore, home to the church of San Giorgio Maggiore. No matter which islands the vaporetto travels to, rest assured that the charming destinations that await are a welcome reprise from the hustle and bustle of the main parts of Venice.

The Veneto Region of Italy

The Cities of  Veneto, Italy