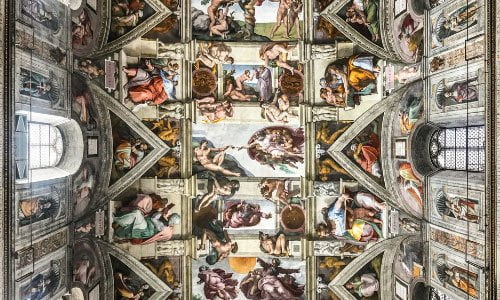 Michelangelo is one of the most renowned artists in history, with much of his work having close ties with the country of Italy. Being born, working, and passing away in his homeland, much of his work can still be found in museums or churches across Italy. Make Michelangelo’s finest masterpieces a part of your next vacation to Italy and lose yourself in some of the finest Renaissance period paintings and sculptures known to modern man.

Toward the end of the fifteenth century, the artist many simply refer to as Michelangelo was born as Michelangelo Buonarroti in a village in Tuscany, Italy. From his early adolescence, he gravitated toward the discipline of art which only continued to flourish under the guidance of prominent patron of the arts Lorenzo de’ Medici and sculptor Bertoldo di Giovanni in Florence. In his twenties, the accomplished Renaissance artist spent much of his time in Rome where one of his most famous works was commissioned, Pieta. Over the course of his eighty plus years, Michelangelo created dozens of paintings and sculptures that are considered still today to be some of the finest works of art ever created.

Adam Was the First

One of the first of Michelangelo’s masterpieces to become well know was a vibrant fresco titled The Creation of Adam, which can be found inside the Vatican’s Sistine Chapel. The fresco is thought to date back to the early sixteenth century and is a depiction from the Biblical book of Genesis when God created the first man, Adam. The scene shows an older figure, presumably God, reaching out to a nude Adam to bestow life upon him. The fresco is one of the main highlights for visitors coming to the Sistine Chapel and is considered one of Michelangelo’s most captivating works.

As wonderful as a trip to the Vatican to see The Creation of Adam is, it’s just one of many of Michelangelo’s artistic masterpieces to be found in Italy. To see only this particular fresco, is to see just a small snapshot of the artist’s talents, which included dozens of works including paintings, sculptures, and even poetry. With this in mind, avid historians and art lovers alike may enjoy incorporating visits to more of his famous works during a vacation to Italy.

The top four most famous works of Michelangelo outside of The Creation of Adam may include:

Michelangelo’s early sixteenth century sculpture, simply titled David, is perhaps his most iconic work and can be seen at Florence’s Galleria dell’Accademia. The white marble statue which took two years to create stands approximately fourteen feet tall and is in the form of a muscled and handsome nude male figure that represents the historical man of David from the Bible in the first book of Samuel.

As stated in the Bible, David is a young Israelite shepherd boy who cleverly battles a giant Philistine named Goliath using only a slingshot. The statue captures the young boy as he must have looked right before going into the infamous battle.

One of Michelangelo’s earlier works is that of the statue titled Pieta. The Pieta is a religious marble sculpture that often evokes feelings of spirituality and emotion in onlookers. The grand statue is a representation of the Virgin Mary holding Christ in her arms in the sad moments between his crucifixion and burial in the tomb. Pieta can be found in St. Peter’s Basilica in Vatican City.

Also found in Vatican City is Michelangelo’s famous painting, The Last Judgement, which can be found on the altar wall of the Sistine Chapel. He began this artistic work in the second quarter of the sixteenth century and is said to have taken an estimated four years to complete it. The title of The Last Judgement is said to describe the second coming of Christ as stated in the Bible. This astounding painting is made even more so by its sheer size, which is forty-eight feet by forty-four feet.

The painting depicts a judgement day theme, but the eye travels over a vast array of different scenes including the joy of the saved, the resurrection of the dead, the despair of the damned, and the angels and saints.

Michelangelo’s early sixteenth century sculpture titled Moses was originally intended to be an integral part of Pope Julius II’s tomb but can be seen today in the church of San Pietro in Rome. The sculpture was created to portray Moses’ reaction to finding the Israelites worshiping other gods shortly after the delivery of the Ten Commandments. The artist is said to have considered Moses one of his most lifelike works, so much so that upon completion of the sculpture he allegedly hit it on the knee and commanded it to speak.

Michelangelo is an integral part of Italian culture, history, and art. Make some of his most famous works a highlight of your Italian getaway while getting lost in the beauty of the museums and churches they live in.