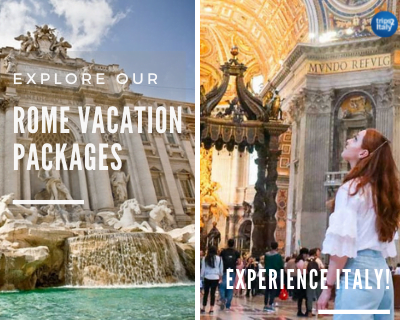 Rome offers a unique fusion of ancient, historical sites, masterful artistic wonders, and lively modern life, making Italy’s capital city one of the world’s crown jewels. At one time referred to as caput mundi (World Capital), due to its influence as a major world power in ancient times, Rome continues to steal the hearts of millions around the world. Attracting 12.6 million tourists in 2013, it is the rich culture and unparalleled history of the city that compels so many to come and explore the streets, museums, ruins, and local establishments.

Boasting 280 fountains and more than 900 churches in 35 districts – each distinctive with their own culture, culinary flavors, and stunning architecture – Rome is teeming with intriguing experiences and activities to enjoy. From visiting iconic locales such as the Colosseum – one of the World’s seven wonders - the Pantheon, or the Roman Forum, to simply enjoying an aperitif at one of the city’s charming bistros, bars, or trattorias, visitors will find themselves in awe and inspired by the culture and vibrancy of Rome.

Located in Central Italy in the Lazio region, Rome is home to a vast variety of landscapes ranging from bustling cities to rural expanses, thanks to its large area of 496 square miles – making it the largest city in Italy and one of the biggest in Europe.
The city grew to be the thriving locale that it is now by its origins as a fast-growing civilization of the past. Rome’s high cultural status at the time could be attributed to the geography of the land, which gave the people of the ancient city many advantages. Originally Rome was built on the “Seven Hills,” a term used to describe the Capitoline, Quirinal, Viminal, Esquiline, Caelian, Aventine and Palatine hills that surrounded the area. Created by volcanic activity by the Colli Albani, these hills were helpful in providing a strong, natural defense barrier to outside military attacks. The city’s location on the banks of the Tiber River – the third longest river in Italy – gave locals access to water and provided ample trade routes. Modern day Rome is now crossed by a tributary of the Tiber – the Aniene. The natural benefits of the city’s geography helped form the Rome that we know today.
As for Rome’s climate, it’s nearly central location in Italy gives the area a temperate climate throughout most of the year. Technically classified as a Mediterranean climate, Rome has cool, wet winters and warm to hot, dry summers with rare fluctuations of extreme temperature and precipitation changes. Spring in Rome can have additional precipitation and the occasional cold front, while fall tends to be temperate and sunny. In general, the climate of Rome is ideal for outdoor sightseeing and experiencing the history of the city.

As one of the world’s most traveled cities, there are a near endless list of activities to choose from. Between admiring the architecture, tasting the food, and immersing in the culture, Rome promises to fill and capture the heart of every person.
First and foremost, plan a wide variety of experiences in “Old Rome.” This section of Rome is the oldest in the city, and while there are a variety of modern buildings in place, parts of the area remain unchanged since the days of Ancient Rome. Here are where travelers will find the quintessential sites such as the historic Colosseum, the Imperial Forums, the Constantine Arch, the Pantheon, and so much more. The way the ancient sections of the city exist symbiotically with modern architecture is a testament to how the people of Rome honor and preserve the long history of their home. These ancient and historic parts of Rome also prove truth to the nickname that Rome is an “Eternal City,” forever holding on to its origins and legacy.

For a classic and memorable Roman experience, visit the famed Trevi Fountain. Designed by architect Nicola Salvi, this fountain is the city’s largest Baroque style fountain and attracts visitors from around the world. Completed in 1762, there have been many legends, superstitions, and customs formed regarding tossing coins into the fountain. The most famous of which is the legend that if visitors turn their back to the fountain, place their right hand on their left shoulder, and toss a coin into the water, they are guaranteed to one day return to the Eternal City. So many visitors toss coins into the fountain, it is said that each night 3,000 Euros are collected from the basin – averaging to over 1 million Euro per year. The money is donated to Caritas, a Catholic charity that provides helpful services to needy local families.

To experience life among the locals, visit Trastevere and Piazza Navona. Both of these areas are lively and full of Romans. Trastevere is a charming area with a medieval feel and a bustling nightlife. It is the perfect destination for having an aperitif at one of the many amazing restaurants or bars. Piazza Navona is a popular square in Rome, where one will find a large mix of locals, tourists, street performers, and artists. While there, guests can relax, mingle with locals, or simply people-watch one of Rome’s most important cultural hubs.

Regardless of one’s religious affiliation, a visit to Vatican City is largely considered a must-do when in Rome. While it is the smallest state in the world, it is likely one of the most beautiful. With stunning architectural and historical masterpieces such as St. Peter’s Basilica and the Vatican Museum – home to countless pieces of art curated by the Popes – the Vatican State is as charming and awe inspiring for art and architecture lovers as it is for the faithful.
After a long day of seeing the sites and exploring the city, take a dinner break and immerse in the delectable culinary culture of Rome. The Romans don’t believe in fast food – the closest thing available is street food, like a porchetta sandwich or suppli’ al telefono (rice croquettes) – so prepare to have every meal be an experience to savor and delight in. Whether dining on rich pasta carbonara, traditional amatriciana, or unique saltimbocca, Romans take their time while eating and treat mealtime as a moment to pause, reflect, and connect with others.

No matter where one chooses to go in Rome, or how one chooses to spend their time there, the Eternal City is the ideal place to practice the Italian tradition of mindfulness. Known in Italy as il dolce far niente, the ability to stay present and enjoy idle time by admiring and taking in one’s surroundings is key to enjoying all the beauty and wonder Rome has to offer. From stunning architecture, to ancient ruins, to immersing oneself in the local culture, it is no secret as to why Rome is one of the world’s most cherished and traveled cities.