The history and culture of Italy is steeped in the appreciation of incredible art and architecture. Famous around the world for not only serving as the birthplace of one of art’s most impactful movements – the Italian Renaissance – Italy is also known for having produced some of art’s greatest creators and most well-renowned masterpieces.

It is no wonder that Italy’s many travel destinations are home to the world’s most famous and highly-visited museums.

Have Tommaso Plan My Trip

Museums to Visit in Rome 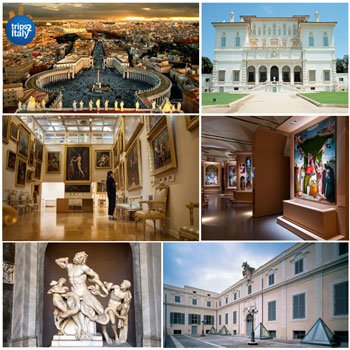 The capital of Italy, Rome has attracted people from all over the world for centuries due to its long, meaningful history and vast amount of architectural, historical, and artistic treasures. While the city itself can serve as a museum of times gone by, Rome also boasts many impressive museums.

The Vatican Museums of Vatican City display an immense collection of art curated over hundreds of years by the Popes. The museum’s 54 galleries make it one of the largest museums in the world. They contain pieces such as Caravaggio’s The Entombment of Christ, Antonio Canova’s Perseus Triumphant, and Michelangelo’s Sistine Chapel. It also has such iconic features as Giuseppe Momo’s Spiral Staircase and the stunning Raphael Rooms.

Also in Rome is the Galleria Borghese, a former villa which now features an art gallery and neighboring gardens. Within the gallery one can find paintings by Caravaggio (Young Sick Bacchus, St. Jerome Writing), sculptures by Bernini (Apollo and Daphne, Rape of Proserpina) as well as works by Canova, Raphael, and Titian.

While in Rome, consider visiting less high-traffic museums such as Scuderie of Quirinale, an exhibition space in the President of the Italian Republic’s home, or the Palatine Museum, displaying a collection of artifacts from the Palatine Hill archeological site.

Museums to Visit in Venice 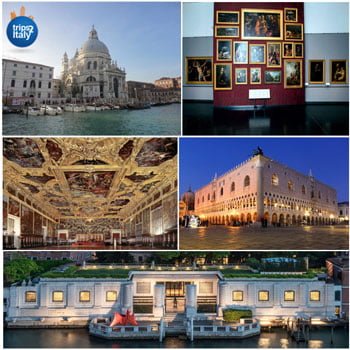 Venice, a city of individuality and variety, features art museums that range from classic Renaissance pieces to interesting modern art.

The most famous museum in Venice is the Accademia Gallery (Gallerie dell'Accademia), which depicts works that help define the growth of art in Venice from the 14th-18th centuries. It features pieces by such artists as Titian, Bellini, Tintoretto, Tiepolo, and Canaletto.

Another must-see museum in Venice is the Doge’s Palace. Located in the famed St. Mark’s Square, the Doge’s Palace highlights Venetian architecture and features grand halls which contain works by artists like Veronese, Titian, Tintoretto, and Tiepolo.

For modern art, visit the Penny Guggenheim Collection. Located on the Grand Canal, it features art by some of the most famous European and American artists of the 20th century, including Pollock, Picasso, Dalí, Magritte, and Calder.

Museums to Visit in Florence 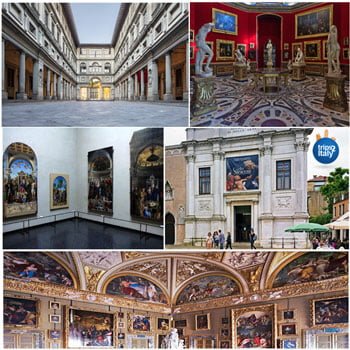 Florence’s piazzas, architecture, and cathedrals make the city seem like an open-air museum. But to truly immerse oneself in the culture and spirit of the city which served as the birthplace of the Renaissance, one must visit some of Florence’s museums.

The Uffizi Gallery, arguably the most important museum in Italy, is one of the best-known museums in the world. Attracting two million visitors a year, its priceless collection contains Botticelli’s The Birth of Venus and Primavera, Titian’s Venus of Urbino, and Caravaggio’s Medusa and Young Bacchus.

The Galleria dell'Accademia is smaller than the Uffizi but no less important. Most well-known for being the home of Michelangelo’s famed Statue of David, it also contains sculptures and paintings by artists such as Uccello, Botticelli, Ghirlandaio, and more.

Located in the Palazzo del Bargello in Florence is the Bargello Museum. While the building itself is a piece of art, it also houses sculptures from Donatello (David, St. George) as well as Michelangelo (Bacchus, Tondo Pitti). In addition, it has a great selection of beautiful ceramics on display.

Museums to Visit in Other Cities Throughout Italy

While Rome, Venice, and Florence are the most popular destinations in Italy, art lovers can experience the depth of Italian art in museums all over the country.

In Naples, one can find the works of famed artists Botticelli, Caravaggio, Masaccio, and Titian at the National Museum of Capodimonte. One of the largest museums in Italy, it features a vast selection of Neapolitan art, Roman sculptures, as well as works from art schools throughout Italy. Also in Naples is the National Archaeological Museum, which is renowned for its selection of Roman artifacts including mosaics and frescos from Pompeii and sculptures form the Baths of Caracalla.

Located in Palazzo Pubblico in Siena is the Civic Museum of Siena. Featuring frescos, paintings, and religious artifacts, it catalogs the city’s history in a spectacular way.

In Milan, travelers can visit Pinacoteca di Brera, the city’s main art gallery. It boasts works from Caravaggio (Supper at Emmaus), Mantegna (Lamentation of Christ), and Francesco Hayez (The Kiss).

What about museums for special interests?

While Italy is well known for its vast selection of art museums, there are a variety of interesting museums which feature unique subjects.

For the automobile enthusiast, no trip to Italy would be complete without a visit to the Ferrari Museum in Modena. It contains a vast collection of every model, including F1 models, as well as a catalog of the company’s history and a collection of historical objects from Italian racing history.

For families with children, the International Museum of Puppets in Palermo is a fun and educational experience. It features an unbelievable collection of puppets from all over the world, including traditional Sicilian marionettes.

Why is Italy such a premiere destination to visit museums? 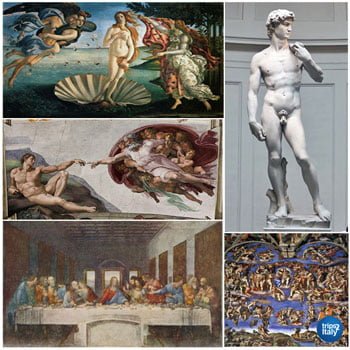 The origins of Italy’s passion for art dates to ancient times. The earliest inhabitants of the area left behind artistically influenced artifacts, and during Roman times the knowledge and skill of Italian art began to thrive. Over hundreds of years, art became deeply imbedded into Italy’s identity, making it the ideal location for modern-day art connoisseurs to experience the culture of fine art.

Italy became one of the world’s biggest destinations for art lovers because of the country’s numerous museums which house artistic masterpieces known all over the globe, such as:

The Renaissance was one of the world’s most significant cultural and artistic movements in history. Following the Middle Ages, the Renaissance was a period of rebirth in which scholars, artists, philosophers, and poets began experimenting with free thinking and helped to elevate the cultural importance of artistic endeavors.

Though the movement certainly spread throughout all of Europe, it began in Italy. During the 14th century, beginning in Florence, Italian officials, wealthy families, and merchants became patrons of the arts. Because creatives could make a living off their work, they were able to create more pieces than ever before and channel all their energy into the study and mastery of their art.

This cultivated a deep passion and appreciation for creative output that reverberated throughout the rest of Europe and changed the art world for good.

Famous Artists of the Italian Renaissance 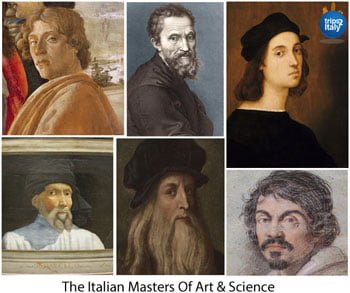 As the center of the European art scene and the birth of the Renaissance movement, Italy became a country with an impressive number of artists. Many of the world’s most famous artists hailed from Italy, including:

By the end of the 15th century, the Italian Renaissance was over, but the impact of it can still be felt in artistic communities to this day, and many of the masterpieces of the time can be found in museums all throughout Italy’s many famed travel destinations.

Museums To Visit In Italy was last modified: March 11th, 2018 by Trips 2 Italy