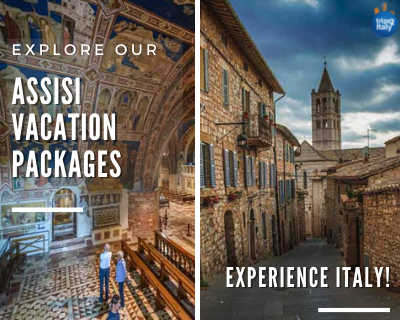 Tucked into the heart of Italy is the gorgeous green and hilly town of Assisi. This medieval city located in the region of Umbria is surrounded by nature and considered a peaceful oasis by locals and visitors alike. Whether traveling to medieval castles such as Rocca Maggiore, checking out the Roman ruins, witnessing the legacy left by Saint Francis, or just soaking up the natural beauty of the area, Assisi is a welcome breath of fresh air that will captivate your heart and soul.

Assisi is a small town steeped in ancient history and it attracts visitors from all over the world who come to experience just that.

The city is estimated to have been inhabited since 1000 BC by the Umbrians, followed by the occupation of the Etruscans and then the Romans. Although the area changed hands many more times by several different regimes in the following years, the Roman influence on the city can still be observed. If touring the city today, visitors can expect to see important Roman landmarks such as the fortifying city walls and the Temple of Minerva.

In addition to viewing the medieval and Roman accents in the city, many travelers come for a more religious experience. Assisi is known to be home to a number of saints, the foremost being St. Francis of Assisi, who was born in Assisi in the late twelfth century. Other local saints include Clare of Assisi, Agnes of Assisi, Gabriel of Our Lady of Sorrows, Rufinus of Assisi, Vitalis of Assisi, and Sylvester of Assisi. 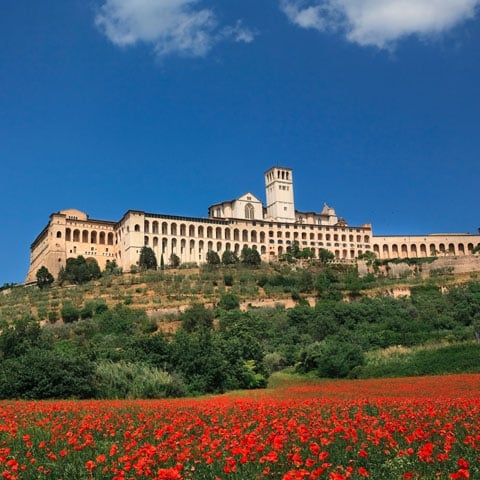 Although the city is less populated now (with an estimated population of nearly 30,000) than it was during the height of the medieval period, it can feel more densely populated as Assisi is visited by avid travelers and pilgrims every day. Visitors frequently enjoy spending time in the city’s main piazza, Piazza del Comune, which is largely a pedestrian zone. The square is a gathering place for all, featuring an artistic water fountain, several local government buildings and outdoor cafes.

From a faraway glance, the city appears to be a collection of medieval structures tucked into the rolling green hills of Umbria, and, upon closer inspection, pockets of charm and beauty abound within. Much of Assisi caters to pedestrian traffic, which seems to encourage visitors to wander the narrow alleyways and streets under lovely stone arches beside the living quarters of city residents. The people of Assisi take great pride in continuing the tradition of natural beauty within the city walls by decorating the outside of their abodes with an enchanting assortment of colorful potted flowers, flourishing gardens, small trees in bloom, and even quaint chairs and benches that beckon to the weary.

If traveling by air to Assisi, the closest airports are Rome’s Aeroporto Leonardo da Vinci, Florence’s Aeroporto Amerigo Vespucci, and Pisa’s Aeroporto Galileo Galilei. From these airports, or even other Italian cities, the quickest and most direct method to reach the city is by car, either via private driver or rental car. Once you arrive in Assisi, you will find most of the population is happy to travel the city on foot. 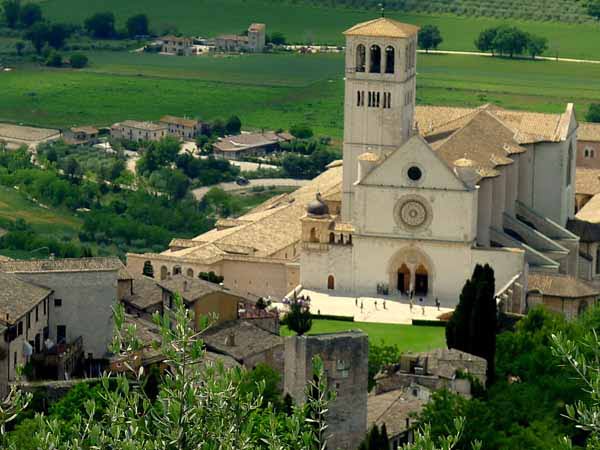 Assisi is located in the province of Perugia and the region of Umbria in the central part of Italy. The region is completely landlocked. The town itself is elevated at an estimated thirteen hundred feet so that it appears to majestically stand atop a hill surrounded by vast green rolling hills of the elegant Italian countryside. The town overlooks the nearby Chiascio and Topino rivers. The Apennine Mountains rise into the horizon about an hour north of Assisi, and to the city’s east is the Parco del Monte Subasio.

The nearby Apennine Mountains protect the region from the temperature influences of the Adriatic Sea and cold air from further north. In general, the summer temperatures hover around the eighties (degrees in Fahrenheit) and experience lows in the fifties. From fall to winter, the city experiences highs that drop from the eighties in July to the forties in December and January, and lows that generally stay above freezing. Spring slowly rebounds with warmer temperatures close to seventy degrees by May, although it can still be quite cool in the early morning and late evening.

There is not a wrong time to visit the charming town of Assisi, but most travelers tend to visit Assisi during the time period between March and September. 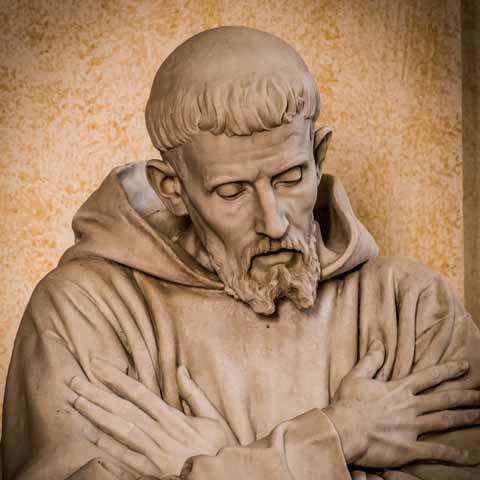 The town of Assisi is perhaps best known for its religious ties to the famous Saint Francis who founded the Franciscan religious order in the town in the early thirteenth century. Today Assisi is one of the most frequented pilgrimage sites in Italy. Even the United Nations Educational Scientific and Cultural Organization (UNESCO) took notice and designated the Franciscan structures of Assisi as a World Heritage Site in 2000.

Born Francesco di Bernardone towards the end of the twelfth century, Saint Francis traveled the Assisi countryside in a simple woolen tunic tied with a rope belt and humbly spread the message of Christ to all he encountered. He is known for following in Christ’s footsteps by living with very little, regularly communing with nature, and loving all of God’s people.

Over time, Saint Francis attracted hundreds of followers who admired his lifestyle and sought to live the same humble way. Together, Saint Francis and his followers initiated a movement to partially reform the church with a simplified and thoughtful approach to religion. Upon Saint Francis’ request, the Pope eventually endorsed the Franciscan order and Francis went on to be a deacon and eventually a saint. 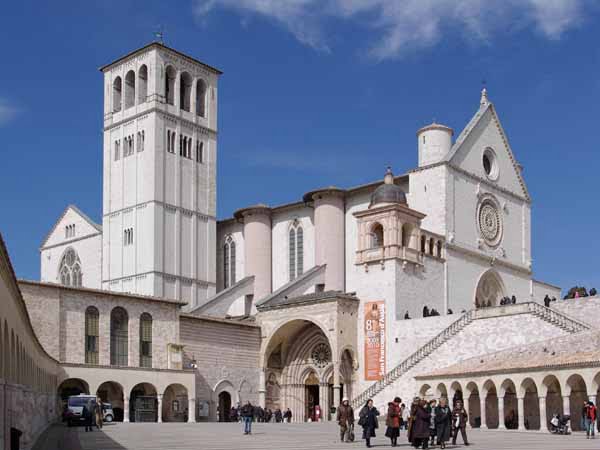 Also of importance is the Basilica of Santa Chiara, which contains the tomb of Saint Clare as well as several objects pertaining to Saint Francis. Perhaps the most important is the famous San Damiano Cross, which, according to legend, is the cross that spoke to Saint Francis.

The Temple of Minerva, which today is a Baroque style church, is also part of Assisi’s UNESCO recognized Franciscan sites. The temple has an interesting history and was constructed during the first century B.C., likely around 30 B.C. Though it is called Temple of Minerva, it was most likely dedicated to Hercules instead. The temple is featured in Giotto’s frescoes in the Basilica of San Francesco where it is depicted as a jail, and this was most likely the structure’s function during the lifetime of Saint Francis. In the sixteenth century, the temple was transformed into a church that still stands today. 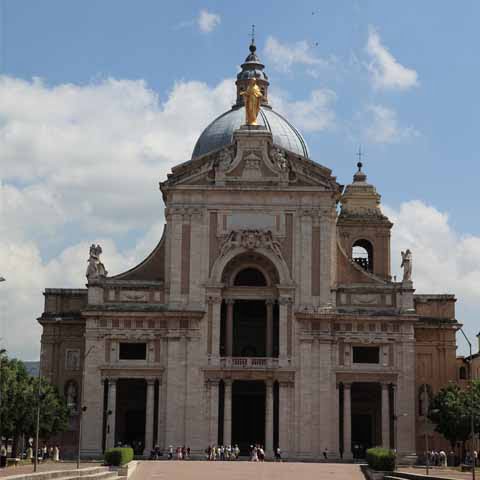 Another famous structure that is part of the Saint Francis legacy is the Porziuncola, a small and historic church located within the enormous Basilica of Santa Maria degli Angeli. The term Porziuncola refers to a small portion of land. The chapel was built by Saint Francis and his followers and is the site where the Franciscan movement began. In the years following Saint Francis’ death, it became clear that this tiny church was not suitable to host the crowds of pilgrims who traveled to Assisi to visit the holy sites of Saint Francis. Therefore, the larger Basilica of Santa Maria degli Angeli was built around the church. The Porziuncola still evokes a sense of extreme reverence through the simple façade, frescoes, and the legacy of the religious man that lived to work here in an effort to spread Christ’s message to others.

Last is the Bosco of San Francesco, a historic wooded area where Saint Francis himself would walk in harmony with nature. The entrance to the wood is in front of the upper part of the Basilica of San Francesco, providing a natural oasis just steps away from the city center of Assisi. This magnificent spot, which some believe to be mystical, features fields, olive groves, hills, art, and the Church of Santa Croce.

Saint Francis was eventually designated as one of Italy’s patron saints, and in the early twenty-first century, Pope Francis took on the saint’s name, a first for the papacy. Saint Francis’ legacy lives on in Assisi and beyond via the historical buildings he established and resided in, the message of Christ that he professed, and the name that is now shared with a Pope.

Whether your interests include history, art, or religion, Assisi offers a unique experience for travelers of all types. Follow in the footsteps of Saint Francis and lose yourself in the history and nature of this remarkable hilltop town.

In summary, it was a GREAT trip! I am very happy that we went through you to plan everything for us. Everything went as planned with no surp

We fell in love with Italy, the local passion, history, the ease to move around and food / wine / gelato / pastries / espresso!ASSISI tranqu

We had an absolute blast overall we loved our trip and I would totally recommend you to friends who would be considering a trip to Italy. We

The Umbria Region of Italy

The Cities of Umbria, Italy