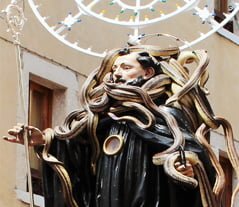 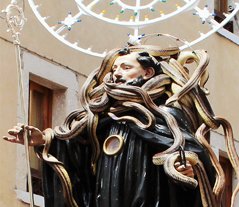 Many countries have interesting traditions involving folklore, festivals and even living creatures, such as the running of the bulls in Spain. But come to Italy, and you will find the most unique of them all.

In a small mountain village known as Cocullo, in the province of L’Aquila, Abruzzo on the 1st of May, there is the Feast of Saint Domenico, or “Festa dei serpari”. Translation – Festival of the Snakes.

The folklore behind this annual event is to honor the opposition between the dangers of the natural world against the survival of the human world. Saint Domenico is the protector of two things relating to this conflict between man and nature. First, he is the patron saint of teeth. Villagers, who wish to avoid a toothache, gather on the morning of May 1st to sing devotional hymns and pull string attached to bells by their teeth to start the day’s celebration. Around midday, a procession begins to form in the narrow streets of Cocullo toward the square in front of the church. In this procession, a statue of Saint Domenico is carried, covered with live snakes. Domenico also is the protector against snakebites, which comes in handy during this procession.

In modern times, the carriers of the statue are snake handlers, who roam the countryside throughout the year, collecting non-poisonous snakes specifically for the event. While centuries ago, the snakes were killed and eaten, no harm is done to these modern creatures, as they are released to the wild after the festival. Instead a sweet ring-shaped bread, made to look like a coiled snake, is prepared especially for the occasion and shared as dessert.

If you are looking for that little known experience during your trip to Italy, this is one festival you will never forget!

An Annual Tribute To Snakes was last modified: June 10th, 2021 by Trips 2 Italy