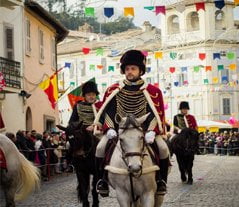 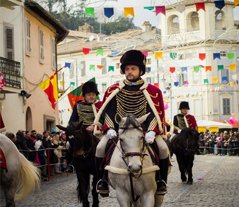 In the region of Lazio, in the province of Viterbo, there is a town called Ronciglione that celebrates a unique carnival throughout its streets. The Ronciglione Carnival is a great moment for the city and this events attract a lot of visitors.

Usually the Ronciglione Carnival takes place from the Thursday before the Shrove Tuesday up to the Shrove Tuesday itself. During this days there are different types of events and especially three are worth to mention.The first one, that takes place on the very first day of the carnival, is the Ussari parade. A group of knights dressed with 19th century uniform, have a ride on their horses to commemorate the period of France dominance. The legend told that one of the Ussari captains, during the french presence in the city, as a defender of the Papal State, fell in love with a beautiful woman of Ronciglione. For this reason, the captain for many times passed in front of her with his comrades, showing off of himself, trying to catch her attention. From this story has born the tradition of the parade.

Another interesting tradition is the one of the Barberi race. This type of race takes place only in Ronciglione, it is a race that involves nine stables that represents the nine districts of the city. The race consist in a challenge among horses without jockeys through the streets of the town.

There is another tradition, the one of "nasi rossi" (red noses). The nasi rossi are the worshipers of Bacchus (in the roman religion was the god of wine and grape harvest) and during the festivity, are recognizable for their red masks. During the carnival they gathered in the central square singing the wine anthem,running after people, offering foods and wine to spectators and entering in the house of their fellow citizen offering macaroni.

Ronciglione is only forty miles distant from Rome and during the Carnival can assure to the visitors a very picturesque experience.