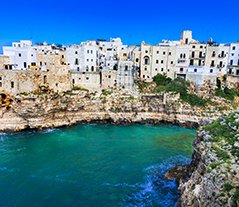 Polignano a Mare is a charming seaside town located near Bari in the Apulia region of southern Italy. Its name, meaning “Polignano at Sea”, could not be more appropriate since the town rests atop a limestone cliff that suspends it 65 feet directly above the Adriatic Sea. This ancient town was founded by the Greeks in the 4th century BC and it is considered one of the most important historical settlements in Apulia. Today, Polignano a Mare is filled with countless structures that reflect the town’s long and varied history. When walking through the city center, visitors will find streets made of stone, lovely white buildings, inviting piazzas, and panoramic terraces that provide absolutely breathtaking views of the sea below.

From the historical city center, it is just a short walk to Polignano a Mare’s beaches, which are known for their crystal clear water. The beaches are wedged between rugged cliffs, creating not only a unique scene, but also providing ample opportunities for one of Polignano a Mare’s most popular activities: cliff diving. This activity is greatly enjoyed by locals, who dive from the cliffs into the sea until the sun sets, and it has also attracted countless visitors to the small town.

In the past few years, Polignano a Mare received international attention as a venue for the Red Bull Cliff Diving World Series, hosting a leg of the competition in 2009, 2010, and 2015. The town will also host a stage of the series once more on August 28, 2016. Polignano a Mare is only one of two Italian towns to host a part of the competition (the other is Malcesine, a town located on the shores of Lake Maggiore in the province of Verona).

The many sea caves that surround the town constitute another point of interest in Polignano a Mare. The best way to fully experience the natural beauty of these caves is by taking a boat excursion, during which travelers can admire the grottos from close range and witness the stunning displays of light produced by the water within the caverns. The bright blue water of these caves was spectacular enough to inspire Domenico Modugno to write “Nel blu dipinto di blu” (commonly known as “Volare”) in 1958, which continues to be one of the most famous Italian songs ever. In addition, there is also a restaurant inside a seafront limestone grotto near Polignano a Mare that provides an unforgettable dining experience. The cave is called Grotta Palazzese and before hosting the restaurant, it served as a ballroom for Apulia’s nobles during the 18th century.

Ultimately, with its striking cliffs and relaxing beaches, Polignano a Mare is a perfect destination for the daring, the romantic, or anyone looking to spend some time in a small, beautiful town directly on the sea. As the town’s most famous song sang, the captivating “blu dipinto di blu” of Polignano a Mare is certainly worth exploring.