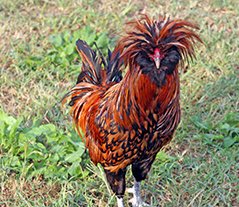 The Padovana chicken, also known as “Padovana dal gran ciuffo” (Padovana chicken with the great tuft), is an unusual breed of chicken found in the province of Padova in northern Italy. This chicken is known for its characteristic crest, with males having a long, curved crest and females having a shorter, more rounded crest. The origins of this particular chicken are disputed, but over time the breed has become emblematic of Padova and the surrounding area.

Though it is not exactly certain how the Padovana chicken arrived in Padova, most historians believe that the breed is in some way related to the Polish chicken, which is also known for its unique crest. One theory suggests that Giovanni Dondi dell’Orologio, a doctor and astronomer who spearheaded the art of clock-making and clock design, traveled to Poland in the 1300s and was so struck by the Polish chickens he saw there that he brought back a few to Padova. However, no official record of Giovanni Dondi dell’Orologio’s trip to Poland has ever been found.

The more likely explanation for the chicken’s presence in Padova suggests that Polish chickens were transported to the area by the Eastern European pilgrims that frequently traveled to Italy’s holy sites, including Padova. These Polish chickens likely reproduced with local breeds to create the Padovana chicken. Regardless of which theory is accurate, it can be said with some certainty that the Padovana chicken was present in the area before the arrival of the 15th century, as shown by artistic evidence. Interestingly enough, the first known artistic depiction of this crested chicken appears in a fresco by Jacopo da Verona that was completed in the year 1397. The artwork, entitled Annunciazione (Annunciation), is located in Padova’s Oratorio di San Michele Arcangelo and is composed of multiple panels. One panel, located above an arched entryway, depicts a peasant woman giving food to what appears to be a crested hen and her chicks. Though its true origins may be disputed, today the Padovana chicken is officially considered to be an indigenous Italian breed and a symbol of the province of Padova.

The feathers of the Padovana chicken present themselves in a variety of stunning colors including gold, silver, ginger, black, white, and several others. These feathers are rounded and create a thick, colorful coat. Both male and females can have feathers in any of the colors mentioned, though the shades are usually different based on gender.

In addition to ornamental reasons, today the Padovana chicken is also bred for the abundant eggs it produces as well as its excellent meat. The average Padovana chicken produces from 120 to 150 eggs each year. The eggs are white, weigh between 55 and 60 grams, and are celebrated in the province of Padova because of their distinct flavor. The meat of the chicken is also highly revered because it is lean and has a delicate taste.

It is amazing how one breed of chicken can have such a rich history and such strong ties to one area. Truly, the Padovana chicken is a magnificent, unique animal that must be safeguarded.