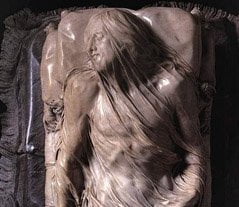 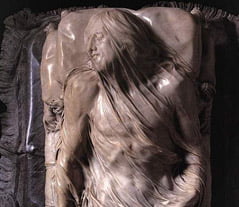 Naples is a city steeped in history and it is home to many wonderful sights and artifacts. One of the most interesting and beautiful places to visit is Sansevero Chapel. Stepping into the chapel is like stepping back in time, and one is able to find some remarkable treasures hidden within. When you explore the chapel, you are going to be looking at some of the most impressive masterpieces that you will find on display in all of Italy.

One of the most famous is the Statue of the Veiled Christ, or Statua del Cristo Velato. The statue, created from marble, and has an eerily lifelike quality to it. It is one of the most famous pieces in the world because of the texture and appearance of the marble. This is also the centerpiece in the chapel, and you will find it at the center of the nave. Antonio Corradini was slated to create the statue, and he’d already done work for Prince Di Sangro, including Modesty.

However, Corradini died in 1752 before he could do more than create a small, terracotta version of the statue as a model. Instead, Giuseppe Sanmartino, a Neapolitan artist, was chosen to create the marble statue of Christ covered in a transparent shroud carved from the same block of marble. This was no easy feat, and Sanmartino did not even use the scale model as reference! However, the sculptor was able to accomplish something that still stands today as one of the most impressive artistic accomplishments. The details on the face alone are stunning.

No vacation in Naples would be complete without stopping into the Sansevero Chapel and experiencing it for yourself. Of course, that is not the only part of the chapel you are going to want to see. You will also see Disillusion, and the Anatomical Machines. In addition, the chapel served as a mausoleum and temple of initiation.

The prince who commissioned the Statue of the Veiled Christ is also the architect of the building. He was quite a character in his own right. He was an inventor and a patron of the arts. He also created laboratories beneath his palace where he would conduct experiments. He worked on everything from chemistry to mechanics to typography and nearly everything in between. The prince was also very secretive about his inventions.

When you go into the lower chambers of the chapel, you can see the aforementioned Anatomical Machines, which are as interesting as they are disturbing. They are anatomy models of a man and a pregnant woman, and they are intricately detailed – so much so that they have the entire blood system still intact. Legend says that these two models were actually servants of the prince who had been injected with mercury while they were still alive in order to preserve the veins and arteries! Regardless of the truth behind these stories, they are certainly fascinating specimens to behold.

If you are planning a vacation in Naples, then you absolutely must take the time to visit Sansevero Chapel and see all of the wonders that it offers including the Statua del Cristo Velato. This chapel is unlike others that you will find throughout the country, and is a trip that you will always remember.

The History of the Statue of the Veiled Christ, in Naples was last modified: October 21st, 2020 by Tommaso De Poi