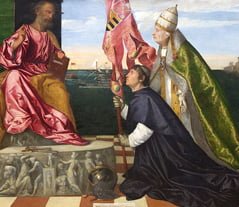 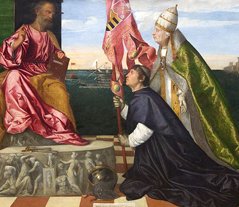 Intrigued by the sexual play and political intrigues of the Borgia family? The recent hit miniseries certainly caters to the tastes of the sordid, but can such escapades really have happened?
History of contradictory Italian family that rule not only the Vatican...
Rodrigo Borgia was the son of Spanish nobility and nephew of Pope Callixtus III, who used his influence to give his family power, money and religious titles. Rodrigo was fortunate enough to become a cardinal at a young age. His cardinalate was spent in carousing and drinking his way through the Roman countryside, and proving himself a good manager of church affairs. When Pope Innocent VIII died, Rodrigo purchased 2/3 of the voting cardinals to become Pope Alexander VI.

A favorite practice was to poison people to annex their property and titles for his family, in the hopes of eventually creating a country ruled by the Borgias. Perhaps the most infamous of all his follies was the “Dance of The Chestnuts” where, after an evening of dinner and dancing, nude courtesans crawled on the floor to gather chestnuts and receive prizes for best form.

The most prominent son was Cesare, who shared his father’s passion for physical pleasures, but built upon the murderous foundations by getting his hands dirty. A courtier by the name of Burchard kept thousands of pages of details of Pope Alexander VI’s reign, and shares a tender family moment with the ages. One fine day, a gaggle of shackled prisoners were led to St. Peter’s square, near the location of the monolith. 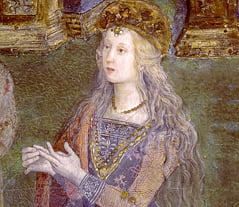 A line of papal guards closed off the square, as the Pope and his favorite daughter, Lucretia, gazed upon them kindly from a window. Hoping for a pardon for their crimes, they prayed for mercy, unaware of another window being opened a few spaces down. A gunshot rang out, hitting one of the prisoners, and panic coursed through the bound crowd. Cesare Borgia, dressed in black velvet, put down his spent rifle and accepted a freshly primed one from a stack of many, and continued to execute the group of men, women and children below. When the final shot was fired, and the smell of gunpowder was heavy in the air, Rodrigo congratulated his son on his fine aim and invited him into the Vatican apartments for conversation. The bodies were disposed of in the Tiber River.

Lucretia Borgia is a historically conflicted figure. Contemporary accounts portray her as a ruthless posioner, who played willing temptress for her father Lucretia Borgiaand brother, including marrying for power consolidation and even rumors of happy incest. Modern scholars have looked at her in a more understanding light, believing that she was an unwitting and unwilling pawn in the family machinations and lost her husband to an insane brother. In her marriage to Alfonso, Prince of Aragon, it is believed that Lucretia had found true love. When the Aragonese dynasty formed alliances against the Borgia interests, Alfonso was brutally attacked by a gang of thugs.

His wife attended him in the Vatican, and he began to recover from his wounds, until Cesare strangled him. The next year, the Pope left the day to day business of the Vatican in Lucretia’s hands as he reviewed the new lands gained by Alfonso’s death.

The male Borgias came into ends that befit their lifestyles. Depending on who you ask, Rodrigo was either accidently poisoned by Cesare or died of a contracted illness at a banquet. During the banquet, both Cesare and the Pope began vomiting, but while the son recovered, Rodrigo died several days later. His body turned a vicious purple and bloated from the heat and disease. When he was placed in state, mourners were aghast at the swollen tongue protruding from his mouth and the black crust that had formed on his body.

The coffin was too small for the misshapen body, and workers were forced to jump on the lid to get it closed. Cesare left Italy for Spain after his father’s death, and died as a mercenary. Lucretia came to the best conclusion, as she enjoyed a steadfast love with the Duke of Ferrara, living a life of good works and prayer, with the occasional romantic indiscretion. She died of complications after giving birth to her fifth child.