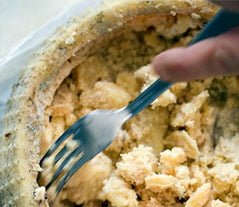 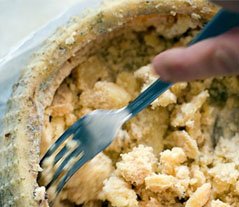 Please, go on reading only if you have a strong stomach. You could consider the news disgusting! In spite of this, if you are planning a trip to Sardinia, it could be useful to know what Casu Marzu is, to enjoy or to avoid it!

Casu Marzu is created by leaving large pieces of Pecorino cheese outside to ferment.  During this process, the eggs of the cheese skipper, a type of insect, are intentionally introduced to the cheese, as well as the larvae. There can be more than five hundred eggs in the cheese!

The texture of the cheese becomes very soft, with some liquid seeping out. The live larvae themselves appear as translucent white worms, about 8 millimetres (0.3 in) long. 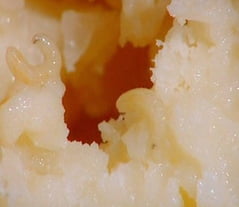 Usually – but not always - people clear the larvae from the cheese before eating. Casu Marzu is usually eaten with bread and a strong red wine.

The EU regulation – after a period in which it was considered illegal to sell the Casu Marzu - declared the cheese a "traditional" food, made by the same recipe for more than 25 years and, as the recipe is thousands of years old, it is therefore allowed to deviate from ordinary food hygiene regulations.