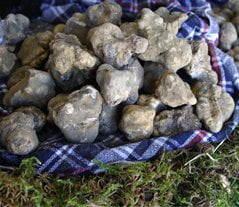 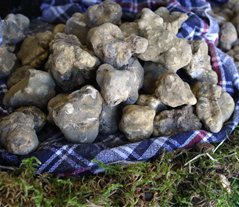 As some may know, the delicious and exclusive white truffle can be found and savored not only in the Alba and Piedmont region, but also in the municipality of Acqualagna in Italy’s central region of Marche. Although Acqualagna’s population is only less than 5000, it is renowned throughout Europe for its centuries-old tradition of truffle gathering, production and marketing due to its climatic conditions which make it possible to harvest truffles year round. Every year the town hosts several truffle festivals with the most famous taking place each year at the end of October through early November and which attracts many enthusiasts not only from Italy, but from England, Germany and North America as well.

The natural beauty of the surrounding areas and the aroma of truffles make Acqualagna a truly special place. Those who visit Acqualagna to experience the sweetness and the flavor of the truffle will also find themselves surrounded by the amazing scenery of the Furlo Gorge.

The Furlo Reserve is a real gem amid the Apennines; one will be astonished at the scene of this dramatic gorge created by the Candigliano River with its emerald like color. The color comes from the limestone from the mountain through which this river runs which is a very unusual color for a river in this region of Italy.

It is due to this particular kind of stone that 400 years B.C., the Etruscans succeeded in digging a gallery 26 feet long through this mountain which was once a single mass of rock; this allowed the people of that period to pass through the gorge when the River was flooded. The technique used although unusual was highly effective: men warmed up the stone and immediately after used water and vinegar to cool it in order to make the digging easier.

Centuries later in 77 A.D., under the Roman Emperor Vespasiano, another gallery 125 feet long was dug which at the time allowed for the passage from the Adriatic to the Tyrrhenian side of the Apennines. Today it is still part of the modern day road system and the ancient Flaminia Roman road, which, starting from Rimini, in Emilia Romagna, still leads to Rome passing through the original tunnel.

Not too far from Acqualagna is Urbino, a must see destination of the Marche. Urbino was a focal point of the Italian Renaissance, a heritage still on display in its remarkable medieval architecture and for this, since 1998 the city has been declared a World Heritage Site by UNESCO.

Thanks to Duke Federico da Montefeltro, the medieval family residence was transformed from a “fortified castle to a palace city”. One of the city’s main sights is the splendid Ducal Palace, with its famous round towers and captivating courtyard, a masterpiece of Renaissance art. It currently houses the prestigious National Gallery of the Marche, whose collection of great works include “The Flagellation” and the “Madonna of Senigallia” by Piero della Francesca, as well as the “Muta” by Raphael, who was from Urbino; in fact his birth house is now a museum.

Urbino has always been a scholar city and since the peak of its flourishing in the 15th century, it has attracted both students and artists. One of Italy’s most prestigious universities was founded here in the early 16th century, the University of Urbino which currently houses the National Art Institute.

Whether your visit is to be in touch with Mother Nature, cultural or gastronomical, you will not be disappointed in everything this region of Italy has to offer.