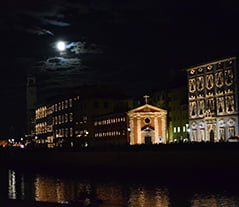 For the people of Pisa, June is a time for celebrations. There are many festivities and cultural events during this month; in the city under the leaning tower, in fact, this period is known as “Giugno Pisano” (The June of Pisa). From the Festival of San Ranieri to the Game of the Bridge, passing through The San Ranieri Regatta, and also, every four years, through The Regatta of the Marine Republics (Venice, Amalfi, Pisa, Genova), Pisa becomes one of the most bustling and vivid cities in Italy for an entire month.

The Luminara Festival of San Ranieri is a tradition that has its roots in Medieval Times when Ranieri Scacceri became the most important man of God of the entire city. The life of Ranieri is the history of a man that after many downfalls, found his path by abandoning all the richnesses and conceits, embracing poverty and  becoming a pilgrim. After visiting the Holy Land, returning to Pisa and performing miracles, he was recognized, by all the inhabitants, as an Holy man. An anecdote wants that in the moment of his death (17 June 1161) all the bells of every single church in Pisa rang together without any operators or instruction.

The Luminara not only celebrates the Eve of the Patron’s Day every 16th of June, but also honors a particular event that happened in 1688. In that year, Cosimo III De Medici, wanted to move the remains of San Ranieri from an old urn to a more shimmering one, on the high altar of the Cathedral of Pisa. So, during the procession, every citizen lit a light to pay reverence to the saint’s spoils. From that moment, every 16th of June the city is illuminated from sunset through all of the night by thousands of candles.

In these days, on the 16th of June, from the late afternoon, the city starts to get animated. The locals start to take, around 5 pm, the best spots on the shoulders of the Arno River between the bridge of the “Fortezza” and the bridge of “Cittadella”. Kiosks, stalls, sweet vendors fill the two sides of the river and and the surroundings become more and more fascinating with the light of thousands of candles (Lampanini) placed on white wooden frames (Biancherie) on every building facing the river. The laughter and vitality of university students spreads energy through Borgo Stretto and Corso Italia, until it all comes down to the fireworks, around 10 pm, which create amazing reflections of light on the Arno River. This marvelous show, usually, lasts one hour, and in the last few years, the fireworks are launched not only from the historical Cittadella but, also, from boats floating on the river. In addition, during the performance evocative music has been added as a background to this impressive spectacle.

After a night of magic, flavors and energy, it’s now time for the historic regatta of June 17th. This competition sees two main factions of the city against each other: the north side of the Arno named “Tramontana” and the south side named “Mezzogiorno”. Each faction is also subdivided, in two different quarters: “San Michele” and “San Antonio” for Mezzogiorno and “San Francesco” and “Santa Maria” for Tramontana. In this race among the four teams, the first one to arrive at a raft in the middle of the river and reach the top of the raft’s pole where a flag with the icon of San Ranieri can be found, is the victorious one.

The Festival of San Ranieri and its Luminara has been enlisted in the index of cultural events presented by Italy to UNESCO. The Luminara and the historical regatta are two fascinating events that attract hundreds and hundreds of people from all over Tuscany, and are actually an intriguing cultural experience for every traveller who has the fortune of finding himself or herself in Italy in June.