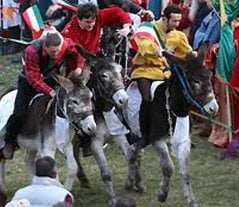 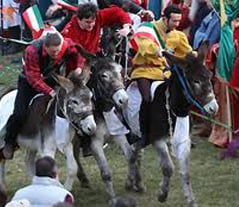 If you think that the word Palio is only associated to the well-known Siena horserace, you will learn that it is not the case after reading this article.
According to its Latin origins, the word Palio (from Pallium) refers to the banner or the cloth awarded to the winner of a competition. According to the tradition the winners’ district will keep this Palio until the next competition, usually one year later.
To this day it has never been established during which kind of competition a Palio could be awarded and even though the “Palio di Siena”, which is held twice a year in the summertime, is probably the most famous, it is not the only one in Italy.

There are several other Palio organized in other Italian towns which are less recognized but certainly not less spectacular and historical. Although horse races are the most common competitions, some festivals host races that are much more curious and unusual. Let’s focus on a couple that will make you discover in a rather humorous manner the traditions of two towns in central Italy.

In the small medieval town of Torrita di Siena, in response to the neighboring and much wealthier town of Siena and its famous Palio, held once a year in March is the Donkey Palio (the “Palio dei Somari”). The origins of this event are quite recent, 1966 to be exact, when the town’s residents decided to celebrate on the day dedicated to St Joseph (the Worker Saint), his humble origins and the simplicity of his life which they felt was quite similar to theirs. Donkeys, which represent “labor” and “humility”, are known to be unpredictable animals which often fail to obey their riders. As they change direction during their path, stop unexpectedly and even alter the course of the race; the Donkey Palio of Torrita di Siena is full of humor and surprises.

On the first Sunday following Easter, the town of Fermignano, near Urbino on the Marche region, holds an even more amazing and unusual race, the Frog Palio, (“Palio della Rana”). It is a race in which young men, representing each “Contrada”, (the town’s characteristic quarters); have to run a 170 meters path with a wheelbarrow carrying a frog on board. If the frog jumps off the wheelbarrow during the short ride, the contender and thus the “Contrada” is eliminated.

Participants wearing Middles Ages costumes, cheering and holding the flag with the emblem of their quarter, traditional food and wine tasting, make the atmosphere even more amusing and unique.

Without a doubt, an unusual and fun way to discover Italy and its colorful traditions!