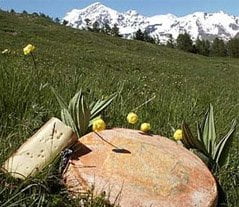 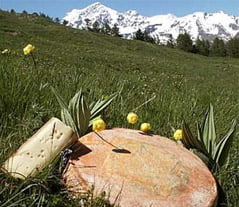 The Fontina is a DOP cheese which means that it has the Denomination of Protected Origin in all of the European Union and around the world, a classification that today guarantees at a European level the respect for strict production regulations and allows for the maintenance of the cheese's specific and organoleptic qualities, as well as its centuries-old tradition. In fact, the “Fontina Valdostana” is exclusively produced with whole, not pasteurized milk of bovines of Aosta Valley which must and traditionally feed directly on the high pastures of the surrounding mountains.
In this beautiful region situated in the heart of the Alps where life seems to have stopped centuries ago, there are about 200 high pastures where there are small dairy-farming establishments situated at altitudes between 5400 - 6900 feet above the sea level; here cows are fed with rich and fragrant fodder which give the milk a vast range of characteristic aromas and flavors.

The history of the Fontina is part of the history of the Aosta Valley (Valle d'Aosta) itself and its well known medieval and once impregnable castles. The Castle of Issogne for example makes reference of it in some of its frescoes: the forms of cheese represented on the right are thought to be the earliest depiction of the production of Fontina cheese.

And thus, the next time you have a slice of Fontina with its pungent taste and intense flavor which is unmistakable, it is sound to imagine majestic mountains, cows, rustic Italian villages and fresh air; but why imagine when you can experience it yourself?