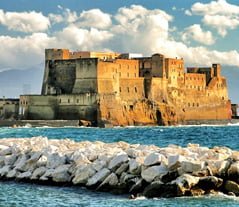 An Enchanted Castle That Is Egg-straordinary 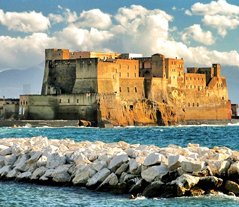 The power of magic and legend can influence the destiny of an entire city and its people. And so it was, in medieval times in Naples, where a prophecy involving an enchanted egg became a symbol to its citizens of protection against disaster.

A great castle was built in the 12th Century by the Normans, on the island of Megaride, just off the shore of Naples. Being a seaside town, the castle’s position as a watchtower over the surrounding area had created an ideal setting for protection from conquerors. As the legend goes, a scribe named Virgil, who was a highly regarded poet, had a reputation for possessing supernatural powers. Among his many magical deeds, he placed an egg in a metal cage in the dungeon of the Sea Castle, prophesizing that this egg was enchanted and would protect Neapolitans from any type of disaster. Should the egg be broken, the castle would be destroyed and the city would be in peril. The castle then became known as “Castel dell’ Ovo” or The Egg Castle.

Over the centuries to follow, the legend grew in significance. Through the centuries, the castle was used to protect the city, was destroyed, rebuilt and later established as a Royal Chamber of the State Treasury. Somewhere during the centuries, through restorations and changes to the architectural structure of the castle, the egg may have been damaged or lost. However, through each chapter in its history, the legend of the enchanted egg remained, mostly as a means to avoid panic among the people who passed the legend down through generations of believers in the fortune it brought to the city.

In the present day, this beautiful structure, which is considered to be the oldest of Naples castles, is used for meetings, weddings, art exhibitions and other ceremonies.  Visit “Castel dell’ Ovo” and you will enjoy a breathtaking panorama of the Italian coastline. It is worth the visit. And who knows? As you tour the grounds, you just might come across an enchanted egg!