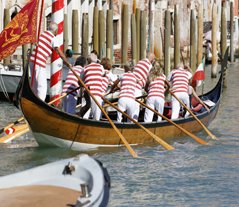 We previously published an article giving a brief overview of the historic regatta that occurs in Venice every first Sunday in September, but the colorful boats that participate in the regatta each year are certainly worthy of their own article. From the very beginning, boats are the true stars of this event thanks to the opening procession of antique 16th century ships. Participating in the procession are the long Bissone boats, which are shaped like ancient warships and nicknamed “snakes”, and a recreation of the massive Bucentaur, which was the official barge of the Doge.

Once the procession concludes, four separate races are held between different types of boats. The boats are steered by at least two rowers who employ the traditional Venetian style of rowing (known as voga alla veneta) in which the rowers must stand, face the front of the boat, and use only one, long oar as they row. This style, made internationally famous by Venice’s charismatic gondoliers, allows rowers to easily communicate with those around them, and participants in the historic regatta have been known to take advantage of this to humorously taunt each other during the races.

The first race involves the Pupparini boats, which are swift, asymmetrical boats once used for maritime surveillance. These boats are steered with two oars by young men who won some of Venice’s previous rowing challenges. This race can be considered an appetizer to the other races.

The stars of the second race, the Mascarete boats, are light boats that can also be used for fishing or yachting in addition to racing. These boats have two oars as well, but they are the only boats in the regatta that are steered exclusively by women. It should be noted that women have been actively participating in Venice’s regattas as rowers since the 14th century and that Venice also hosts a women-only regatta every March.

The third race features the wide Caorline boats which can be used for fishing as well as transporting fruits and vegetables from the islands to the market. Six oars are used to steer these large boats and only men can participate in this race. This race is captivating due to the sheer amount of strength required by the rowers to skillfully maneuver these large boats through the water.

The fourth and final race features the Gondolini boats, which are the only boats whose sole purpose is to race in the historic regatta. The boat’s design is based on the traditional gondola, but it is much lighter and faster making this last race the most exciting of the whole regatta. These boats, which can be considered the Venetian version of a tuned car, are steered with two oars by men.

The color of the boats is just as fascinating as their structure. The regatta of 1843 was the first historic regatta to feature colored boats, which were meant to represent the various zones of Venice. The colors changed frequently over the years, but since the regatta of 1892 the nine official colors have been white, yellow, purple, sky blue, red, green, orange, pink, and brown. Each color is paired with a number that represents the starting order of the boats at the beginning of the race (the colors mentioned previously were listed in their starting order, for example white is number one and brown is number nine). The colors remain linked to the same starting number every year and the starting number is assigned to each rowing crew via a raffle.

Thanks to their interesting shapes and colors, it can be said without a doubt that these boats are not only vital components of Venice’s historic regatta, but of Venetian culture itself.