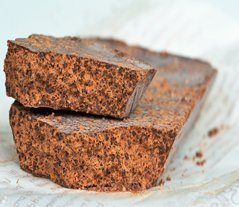 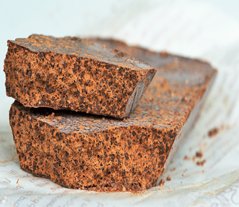 The distinctness of Modica’s chocolate is due to its granular texture and fragrant taste.  Modica’s chocolate-makers follow an ancient recipe whose origin dates back to the Aztec civilization.  The Aztecs named their chocolate Xocoàtl after Xochiquetzal, the goddess of fertility.  Xocoàtl was made by using a stone rolling pin to grind cocoa seeds onto a curved stone supported by a foundation of two other transversal stones.  The Aztecs then mixed spices into the resulting cocoa powder and it was worked until it reached a hardened stage.  When the Spaniards came to the “New World”, they adopted the Aztec way of making chocolate and ultimately introduced it to Sicily, specifically the county of Modica, during their period of rule over Sicily.

Because Modica’s chocolate was never mass-produced, its recipe has remained the same throughout the centuries.  Today, the chocolate in Modica is still made using only cocoa, sugar, and spices (butter, milk, vegetable fats, etc. are never added).  The modern process is quite similar to the original Aztec process. The cocoa is grinded to a certain point after which it is heated to a fluid state. Spices and sugar are then added using a refiner once the liquid has reached a set temperature.  Finally, the mixture is placed in molds and pounded into shape.  The taste of the chocolate depends upon which spices are added and a variety of flavors can be produced including vanilla, cinnamon, chili, and orange.

Should one be interested in experiencing this unique chocolate for himself or herself, it is important to mention that the city of Modica holds a yearly chocolate festival.  This year, ChocoModica takes place from December 5th to December 8th 2015.  The festival will feature a variety of events including chocolate tastings, workshops, children’s activities, and cultural and educational initiatives.