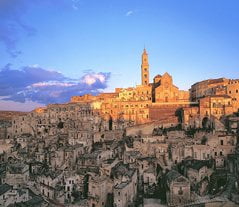 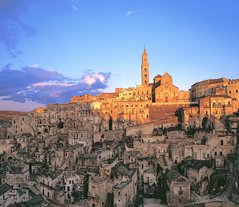 Matera is a charming city in the Basilicata region of southern Italy.  It is known as “the Subterranean City” because the historical part of the city is comprised of ancient cave dwellings called the “Sassi di Matera” (Stones of Matera). There are two main stones present and they are named the Sasso Caveoso and the Sasso Barisano.  The Sassi were declared a UNESCO World Heritage Site in 1993, and were given this honor because they represent unique dwellings where inhabitants of Matera have lived for more than 9,000 years. Matera was the first city in southern Italy to be included as a World Heritage Site and this shows that it is a truly outstanding and innovative city.

Inside Matera, one can observe many ancient churches carved from volcanic rock found in the surrounding area.  There are also many underground churches inside simple caves as well as complex caves networks that feature meditation areas used by monks. In addition, Matera’s rocky landscape is unique because it creates a primitive backdrop which lends itself well to art and film.  In fact, many filmmakers such as Pier Paolo Pasolini and Mel Gibson have chosen Matera to represent ancient Jerusalem in their films.

By earning this distinction, Matera has continued along its path of being an innovative city in southern Italy and this will foster further innovation and progress in the future.