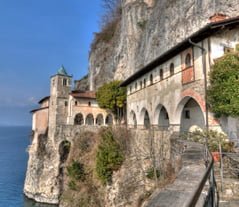 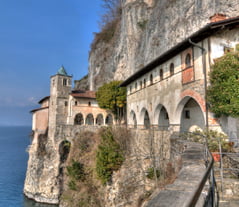 Lake Maggiore is an exciting destination in Northern Italy, snaking through the Southern Alps. The temperature remains mild throughout the year, with a fantastic tropical and subtropical plant life, providing the feel of an oasis for those who choose to enjoy waterskiing, sailing and diving in the summer months. Along the shore, you can find opportunities for hiking, fishing and picnicking in the lush forests and gardens.

The Val Grande National park has many different varieties of rare plants and animals, including alpine tulips, weasels, badgers and eagles, in a dramatic tree filled landscape fenced by mountains. In a contrast of climates, the Natural Park of the Lagoni of Mercurago has swamps of aquatic flowers that thrive in warm temperatures. You can also see the Dormello-Olgiata horses that stable in the pasture land surrounding the park.

The lake is not just for the outdoorsy, though, as fine shopping, dining and spas are all present in the cities and villages in the region. Stresa is a luxurious example of a resort town, and the departure point for cruises around 3 islands, each notable for cultural and historical reasons.

Isola Bella is home to the 17th century Borromeo Palace, full of exquisite antiques, paintings and sculptures in a fantastic palace. Garden enthusiasts will enjoy a visit to Isola Madre. The largest of the three islands, it is dominated by the summer residence of the Borromeo family, and its carefully planned landscapes. Stop for lunch on Isola dei Pescatori, or Fisherman’s Island, for a meal straight from the lake. You can also enjoy the art and music festivals that play in Stresa, or visit the many museums and theaters.

One interesting tidbit of local lore tells of an extreme tax evasion scheme. In 1936, an architect named Marco Schmucklerski was under investigation by the Swiss government for unreported income, and felt the need to conceal some of his wealth. He instructed his assistants to sink his 1925 Bugatti Type 22 Brescia Roadster in the lake, with chains secured around the frame so it could be pulled back up after the investigation was complete.

Time passed, and it became the right moment to retrieve the car. Sadly for Marco, his assistants had used very cheap chains, which rusted easily and completely, leaving his prized set of wheels irreclaimable.

In 1967, divers discovered the remains of the car, and it became a popular spot for dives. When a member of a local diving club was murdered in 2008, his friends decided to raise the wreckage of the car and sell it to establish a charitable foundation in his name. The car was recovered in 2009, and sold for 260,500 Euros.