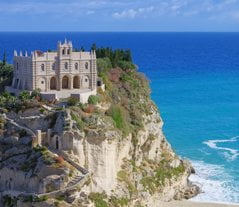 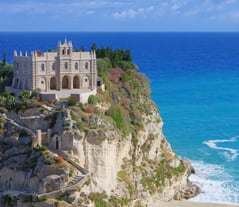 In Italy some sealed books are best retained by locals. Italians, especially in the south part of Italy, are very proud and jealous of their areas. Some hidden spots are confidential and reserved only for those who have connections in site or who have decided to live inside the boot shaped country. For this reason, tourists are practically inexistent in these places. One of these spots is the wonderful Tropea, in Calabria, where you could spot sometimes some Germans, but no other foreign tourists besides them.

Tropea is a seaside town not so far from Reggio Calabria with a pristine sea, an old history and an impressive location on the so called Coast of Gods. In front of its main beach there is a breathtaking sanctuary on the peak of a massive cliff, named Santuario di Santa Maria dell’Isola. This building is one of the most advertised locations of Calabria and is considered to be an emblem of the entire region, but most of the people who have seen just a photo or a drawing of it can only guess where its position is on the globe.

The history of the Sanctuary dates back to medieval times. The first building was an undefined religious square structure which was the basement for all the following expansions commissioned through time by all the different rulers. This religious place became famous for the presence of a wood Virgin Mary statue, which foremost was placed in a grotto inside the cliff and then at the top of the Sanctuary once it was constructed. With its extraordinary thaumaturgic powers, the statue attracted pilgrims from all around the region. The story told that one day a ship docked on the rock and stayed there until the wood made statue was secured inside the vessel. For this reason there are no more traces of that holy artifact inside the Sanctuary.

Through centuries, the sea drew back and permitted the creation of a ground connection to the majestic rock which was previously only surrounded by the sea. Furthermore, a stair was carved into the tuff which permitted to reach this holy spot in an easier way. After an earthquake, several modifications of the main structure and a nine year period of restricted access, the Sanctuary became open to visitors again in 2014. This outstanding building overviews a clear sea, placid beaches, the historic center of Tropea and still preserves a lot of stories and mysteries within its walls.