The Sardinia region has a distinct culture that sets it apart from other regions in Italy, as evidenced by the island’s particular cuisine, language, and traditions. These differences are mostly a result of geography; since the island is physically separated from the rest of the  Italian peninsula, its history has unfolded in different ways. One symbol of Sardinia’s unique culture is the nuraghe, an ancient cone-shaped structure composed of large stones that can only be found in Sardinia. The nuraghi were constructed by the Nuragic people, a prehistoric civilization that lived exclusively in Sardinia from the 18th century BC to the 2nd century AD. Though 7,000 examples of these massive structures can be admired in Sardinia today, not much is actually known about the nuraghi or the Nuragic civilization.

In the center of the Cabu Abbas plain near the northern Sardinian town of Torralba, it is possible to admire the large, yet compact compound of Nuraghe Santu Antine. The nuraghe’s central tower in particular can be viewed from great distances since it is 55 feet tall, which is about the height of a five story building. This tower is reinforced by a triangular shaped wall of stone that once contained three additional smaller towers at each of its ends (today only the foundations of these minor towers remain). Surrounding the nuraghe is a small Nuragic village where the remnants of circular huts can be observed. Remains of square-shaped Roman dwellings can be identified near the Nuragic village as well, showing that later civilizations continued to utilize this nuragic complex and the surrounding area.

Nuraghe Santu Antine was built during the Bronze Age, most likely in the 16th century BC, using basalt, a local volcanic stone. 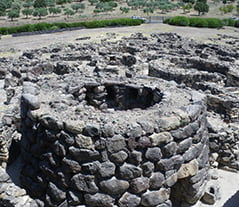 The nuraghe is a megalithic structure, meaning that the large stones used to construct it were put into place via an interlocking system without the use of mortar. The stones at the base of the nuraghe are quite massive, and the size of the stones decreases as higher levels of the nuraghe are reached. In front of the central tower of Nuraghe Santu Antine there is an enclosed courtyard that contains a large, covered well and connects two of the complex’s minor towers. The central tower was originally composed of three floors and is believed to have once been even taller than it is today. The interior of the Nuraghe Santu Antine is filled with long, interconnected corridors that lead visitors throughout the structure and to the nuraghe’s courtyard.

As with the other countless nuragic formations found in Sardinia, the function of Nuraghe Santu Antine is not known. Many historians believe that the nuraghi in general served as defensive structures, but since they are not present in any other part of the world and no written record of the Nuragic culture exists, this cannot be declared with absolute certainty. Other theories suggest that the nuraghe may have served as dwellings for rulers, have been used for religious purposes, or may even have functioned as primitive observatories. Some historians believe that not all nuraghe had the same function because even though they were built in a similar manner, their actual structure (size, number of towers, etc.) is quite varied. This would mean that Nuraghe Santu Antine could have served a completely different function from other nuraghe, such as Su Nuraxi Barumini, which was chosen by UNESCO to represent the nuraghi tradition.

The mysterious nature of the nuraghe has drawn countless visitors to Sardinia in recent decades with many hoping to unlock the secrets of not only the structures themselves, but of the ancient civilization that built the structures. Regardless of their purpose, the nuraghi are one-of-a-kind structures that serve as a perfect symbol for the unique people of Sardinia.