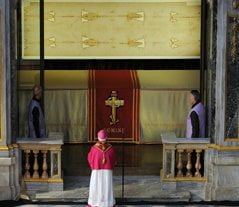 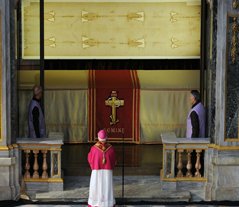 The Shroud of Turin is perhaps one of the most mystical images of all time. It was said to have been the cloth that covered Jesus of Nazareth upon his burial. First noticed in 1898 by a photographer who was shooting pictures of it, it clearly depicts an image of the crucifixion. Due to its delicate nature, it is only displayed publicly a few times during the curse of the century.

.This year, His Holiness Pope Francis announced that the Shroud of Turin would be displayed for 67 days, beginning on April 19th through June 24th at the Cathedral of Saint John the Baptist. What makes this exposition of the most famous linen cloth in history so special is that it takes place only five years after the last exhibit and Pope Francis plans to attend.

There have been numerous scientific examinations conducted throughout the Shroud’s history to authenticate the claims of its origins. Experts and scientists who offer explanations as to the mysterious image that appears on the cloth have subjected it to much analysis. But for the many people who take the spiritual journey to view this magnificent exposition, their faith brings with them an offering of reflection, prayer and hope.

An Extraordinary Pilgrimage to the Shroud of Turin was last modified: October 21st, 2020 by Trips 2 Italy