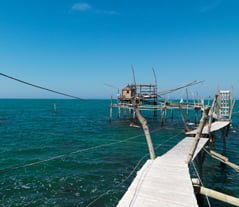 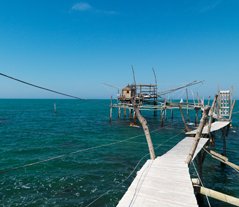 The Abruzzo's morphological variety of its landscape brings together two separate environments that do not mix very easily: on the one hand there is the seaside in all its remarkable beauty and, on the other, the fascinating charm of its mountains; two quite contrasting landscapes brought together by gently rolling hills that blend together tradition and modernity.

The region also boasts an attractive coastline. The deep blue waters in this area conceal a startling variety of marine life and the shore borders on a series of sand dunes covered with typical Mediterranean marquis. There are some highly characteristic one-man fishing posts (called trabocchi) which are small huts built on piles. The sandy shores along the 140 km coast alternate with pebbly beaches surrounded by green hills covered with mulberries, strawberry trees, broom and also the smell of liquorices, lentiscus and pine forests.

It is just a short trip from the seaside resorts, projected into the future as 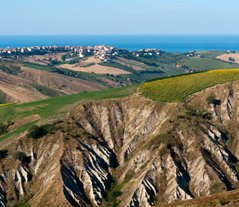 modern coastal towns, to all kinds of landscapes ranging from the winding Apennines with their towering peaks and Calderone glacier, the southernmost in the whole of Europe, to highlands offering magnificent views across a picturesque landscape of woodlands, waterfalls, and caves.

The natural environment is protected by three National Parks: Abruzzo, Gran Sasso e Monti della Laga, and Maiella. Rare species of flora and fauna (the Marsicano bear, Apennine wolf and Abruzzo chamois) are the most distinctive features of what is still a truly fascinating natural setting.

The main city L’Aquila, the old towns and villages knit perfectly into the countryside as evidence of a pastoral tradition stretching back throughout the region’s history.