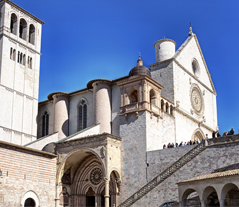 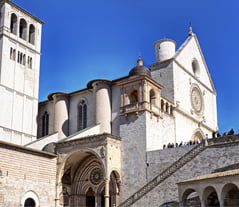 Arnaldo Fortini was the first to identify this house between the churches of San Nicolò and San Paolo as the paternal house of Saint Francis, a conclusion to which he was led through his extensive research into surviving records of the periods. Space prohibits giving the full account of his discoveries in this much-debated issue, but a summary of the principal factors in his identification follows:

In 1228-29, two years after Saint Francis died, the central piazza in Assisi was enlarged; the new portion was called "platea nova". Several houses on that side were demolished, and a special tax to pay for the costs of this civic improvement was levied on the owners of the houses that were then facing the piazza - a very desirable location. Among those who paid were the sons of Angelo di Pica - Francis's brother, who was a merchant, like their father. Presumably his house (and shop) would have been also Francis's house, for the merchants were grouped in one quarter of the city. (In fact, the name of the street on which the house is located, Via Portica, comes from an arcade that was once over the shops). The questions on which there have been disputes have been: what part of the piazza was enlarged? And where was this house?
Fortini, from the descriptions in the records, says that the piazza was enlarged on the west side, away from the mountain, and that therefore the house must be found there too. Unexpectedly, his opinion was fully corroborated in the last few years, when in a considerable remodeling being done on the Convento di San Antonio on Via San Paolo, excavations uncovered the remains of the walls that formed this "platea nova", now covered by the Torre and Palazzo of the Capitano del Popolo, the Costanzi house, and the Convento itself, all built later. These walls are now open to public view.
A second major clue in the search for the house is a note in the "Liber Exemplorum" that the author had gotten a great deal of information from a Fra (Brother) Nicola of Assisi, whose family's house was joined to that of Francis's family. Fortini identifies this brother as Nicola di Giacomo, a prominent notary in Francis's day who joined the order after a successful professional career. His house was next to the church of San Nicolò, and a number of his notarial records were drawn up there.

Two other documents and a strange set of circumstances even more dramatically speak to the identification of this house, which in all details fits the description given in the tax record. In 1280 Francis's nephew Piccardo (Angelo's son) bought two-thirds of the house of which Fortini speaks, which by that time had passed out of the hands of the family. He paid what was at the time a shockingly hight price of 200 "libbre" (pounds) for it. Three days later he handed it over to Nicola di Giacomo, who owned the remaining one-third. He offered him the longest lease allowed by law - to the third generation - for a rent of a "piccolo denaro", an insignificant coin, to be paid each year on the feast of Saint Francis. He surrounded the rental by restrictions: only direct heirs could hold the lease; only direct heirs could live in the house; it was not to be alienated. The penalty for any violation was the full purchase price of the house, 200 libbre. The lease was solemnly signed in unusual circumstances in the Basilica of San Francesco, with friars and leading citizens in attendance.

Two years later, in 1282, Piccardo took further steps, this time to provide a substitute for himself as landlord, for he was aged and unmarried. he gave the house to the Benedictine monks who owned the church of San Paolo, which was next door, with the provision that all the terms of the lease were to be honored.

Piccardo was for many years a devout member of Francis's secular Third Order and had kept an oratorio in his own house in memory of Saint Francis. He also had served the Friars Minor for years as their procurator. Given the devotion he had for his uncle, the only sensible explanation for these elaborate arrangements is that he wished to preserve this house in his uncle's memory, in an era when there was not the slightest interest in any official quarters in anything concerning the human side of a saint - his family, his house or whatever.

Such attitudes surely also explain why Piccardo's well-laid plans went astray. The house comes into view again only in the fifteenth century when it was rented to the shoemakers' guild by the Santa Lucia monastery, an uncloistered branch of the Poor Clares, which Nicola's granddaughter Bibola is known to have entered. Presumably by that time, with all the principals dead, the term of the lease had been forgotten or were ignored. She transferred title to the order when she entered it. That order was suppressed in 1475 and the house disappeared from history.

For all the many details involved in the identification of the house and a full discussion of other houses in Assisi that have been previously identified as "the paternal house of Saint Francis" (see Brown in Englebert's Saint Francis, pp. 407-19).

Local traditions in Assisi indicate two other places as the house of Francis. Pilgrims usually visit both shrines. Chiesa Nova was built in 1615 with the initiative of king Philip III of Spain. It is an octagonal church in which the friars indicate a small "celletta" in which, according to tradition, Pietro di Bernardone locked the young Francis. From the church one passes to the remains of a medieval building, which is indicated as the paternal house of St. Francis. Nearby the second place which tradition marks as the actual birthplace of St. Francis is the Oratory known as "San Francesco Piccolino". According to Batholomew of Pisa this was the stable in which Pica gave birth to Francis. This late source (1395) is obviously inspired by the devotional conformity of Francis to the life of Christ. (Courtesy and property of Franciscan Institute - Malta)

Information on how to plan your travel to Assisi, Umbria Italy can be also found on www.trips2italy.com/assisi