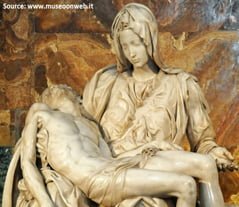 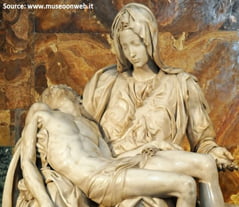 Italy is second to none when it comes to masterpieces of art and statues, architecture, museums, and squares. So it is no surprise that one of the most important artists of all-  time was born and raised in Italy.

Michelangelo Buonarroti was born in Caprese, a little town in the province of Arezzo in the region of Tuscany. His adolescence was spent in Tuscany, specifically in Florence, where he learned all the important techniques of painting and sculpting. In that period his genius and talent was always evident and, in many cases, surpassed that of his Master. During that time, Michelangelo became particularly well known and recognized as the greatest artist of all time for three masterpieces: the Pieta, the David and the Sistine Chapel.

When you set your eyes upon The Pieta, it is truly one of the most amazing statues to behold. This masterpiece represents the body of Jesus on the lap of Mary, his mother, after the crucifixion. The statue is made with Carrara marble, directly chosen by Michelangelo. The astonishing details of this statue and the softness of its lines immediately evoke a sense of comfort, smoothness and "maternal" empathy that only this work can provide to all who gaze upon it.

The statue of David is one of the most famous and world-renowned works by Michelangelo. David’s "marble body" is the representation of strength and youth, and an example of what a perfect male body "should” be as a Renaissance canon for male beauty. David was a biblical character who faced Goliath the giant. Michelangelo chose to represent David in the moment of his resolution to face Goliath; unlike others artists who have commonly chosen to depict him during the celebration of his victory over the beheading of the giant. For Florence, this statue represents the freedom of the city against every type of tyranny or slavery.

The Sistine Chapel, in Rome, is truly one of the most unique places in the world. A great number of artists participated in its creation, but the main stage of this magnificent human artifact belongs to Michelangelo. The Tuscan artist worked on the ceiling and the frescoes of the last judgment. These two parts of the chapel are the most famous and represent the top expression of Michelangelo’s genius and the imagination. In particular, the moment of the creation of Adam is one of the pieces of the ceiling that is most world-renowned. To express and underline the majesty of the chapel, J.W. Goethe, a great European writer once said: "Without having seen the Sistine Chapel one can form no appreciable idea of what one man is capable of achieving."

We could say a lot more about the artistic genius of Michelangelo, but we would be neglectful if we did not also speak about his personality. Michelangelo was a very short-tempered man that in many cases had fights or quarrels with other artists, collaborators or principals during his artistic efforts. He selected every single block of marble for his statues.  The realization of his works was most often characterized by an endless dissatisfaction, always looking to the small details, improvements and corrections. Despite his fame and the generous rewards from his principals, Michelangelo chose to live in austerity, which seemed too much like poverty, due to his frugality and extreme greed for wealth. Michelangelo was an artist who reached an outstanding level of technique, passion and imagination; perhaps who went above and beyond all the established standards, creating a new standard of what art was meant to be during the Renaissance.

Michelangelo – The Greatest Artist Of All Time was last modified: October 21st, 2020 by Trips 2 Italy