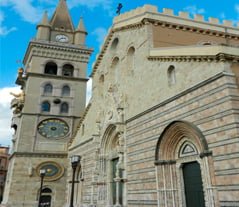 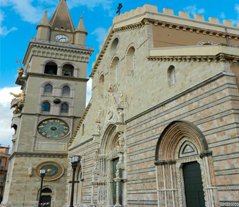 The roar of a majestic lion, a stately rooster’s crow, statues coming to life and music filling the air as a story unfolds; this artistic display of characters sounds more like an up and coming movie than an eighty year old Astronomical Cathedral clock. The Cathedral of Messina’s animated clock show is a great way to display history to any variety of age groups, whether they are an older crowd or a younger generation. Children will squeal with delight as they watch the animals spring to life, and adults will smile as they witness this majestic bell tower tell a story in an entertaining and beautiful fashion.

The Cathedral of Messina located in the northeast corner of Sicily, Italy is one of the largest animated clocks in the world. This 1930’s clock tower, boasting over two hundred feet in height, creates a historic show every day at the top of the day. Upon the strike of noon a set of bronze figures (standing 10’ high) strike two bells awakening the majestic figures contained within the tower. The mighty lion, the symbol of Messina’s strength, is the first to rear his head with three giant roars. As if startled by the deep roar, a rooster begins to flap his wings and bursts forth cawing three times in return. 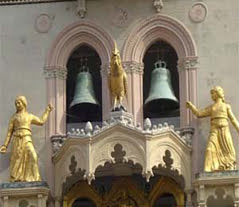 An angel soon follows, to present a letter to the great Madonna, followed by an assembly of ambassadors bowing their heads in reverence as they solemnly pass by. This spectacle comes to life for eleven minutes before being tucked away again until the following day. After the show, you can step inside and take a look at the inner workings of this magnificent clock.

This exciting show depicts scenarios that represent the beautiful and strong city of Sicily, including religious events, civil history, liturgical periods, and human symbolism. The show is free to any audience, and because the spectacle is performed at the same time each day, it is easily scheduled into any agenda. Don’t wait, visit the Cathedral of Messina clock tower and witness this magnificent show yourself!