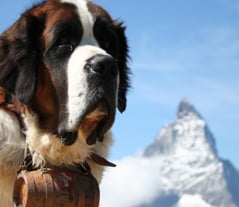 Most of us love pets. They give us emotions, a lot of happiness throughout the day, and they make our return home sweeter every time. Dogs are considered dependable, and reliable. With a peaceful attitude and enormous proportions, the St. Bernard breed is the best example of these qualities. These dogs are known for helping people face difficult mountain paths and saving lives in the most extreme conditions.

This dog is considered the national dog of Switzerland, and the Hospice of the Colle of Gran San Bernardo, the place where this type of breed was raised and born, is officially in Switzerland, but it is located a few meters from the border with Italy. In fact, the main ancestor of the St. Bernard breed is the Roman Molossian, from Lazio, a war dog used during the Roman Empire. As a result, the St. Bernard dog is one of the symbols of the Italian region of the Valle d’Aosta as well. He is the warden and protector of this natural Heaven and its “Paradise”. Yes, the park of Gran Paradiso (“Great Paradise” in English) is one of the most spiritual and outstanding parks of all Europe for its biodiversity, its breathtaking landscapes, and its one-thousand-year-old glaciers.

The St. Bernard dog serves a great number of purposes in its natural environment, the high mountain. With its strength and size, the St. Bernard is capable of leading the way through heavy snow, like a snowplow, and choosing the best path for returning home even in a severe snowstorm. Its size not only prevents wild animals or malevolent people from getting near you, but it also serves to carry the injured, or someone who has lost his way, through the Alps. In addition, this dog is able to foresee avalanches and find unlucky people buried under meters of snow. Another noble quality of this fascinating animal is his power to heal and put in a good mood whoever is next to him. This is the reason why, among experts, this breed is considered to be one of the best for pet therapy.

One example of this breed’s incredible abilities can be observed in a legend surrounding a particular St. Bernard named Barry. Between 1800 and 1812, Barry was one of the dogs at the Hospice of the Colle of Gran San Bernardo. He was able to rescue and save more than forty people from the adversities of high altitudes. History narrates that his death was caused by a severe wound inflicted by the same person he was about to rescue, only because that person thought he was a bear. Today, this dog is regarded as a national hero and he is embalmed in the National Natural Museum of Bern, in Switzerland, under the name Barry I.

This bear-sized dog is the guardian of the untouched beauty of Valle d’Aosta, a region with unexpected castles, pristine rivers, and cities like Aosta or Fénis, which deserve to be experienced with the easygoing company of our big friendly giant.

About The St. Bernard Dog Breed & Their Life In The Mountains was last modified: October 21st, 2020 by Trips 2 Italy