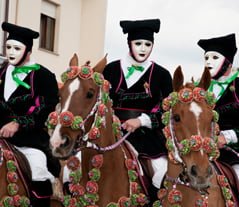 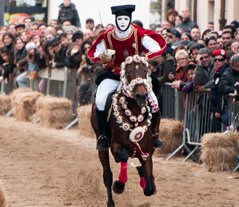 On the island of Sardinia, where lively colors and bright festivities are the norm, a ritual of contrasting black and white can seem far from the original tempo of the city. Once a year around the time of Ash Wednesday, Sardinia becomes an island that is bursting with black and white painted faces, grotesque masks, and ancient rituals that have been around for over two thousand years. This Sardinia carnival, also known as “Carrasegare”, is a celebration that brings forth parades, mysterious horse-races, and eerie street dances that continue for days on end.

The festival begins on Tuesday, following through Ash Wednesday, to finally end on Thursday night. This three day affair is filled with food, dancing, and masks, also known as Issohadores, Thurpos, or Mamuthones, adorned by every attender. Different areas of the island will have differing festivities. For instance, the Carnival in Ovodda features “Don Conte”, a large male puppet featuring a large full belly filled with rags, is burnt at sunset on Ash Wednesday, representing the death and rebirth of the cities ancient rituals. The Carnival in Santu Lussurgiu features stunt riding on horseback, a favorite among those in the Oristano area. Another favorite on the island is the Carnival of Tempio Pausania, which is located in the north. The festivities include a popular parade, with the center of attention being a colorful political figure (representing King George), which is paraded around before being lit on fire in the main square at the conclusion of the parade. 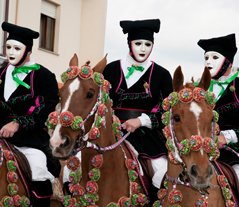 This non-traditional carnival is not an event that is planned or advertised such as a normal attraction would be. This, however, leads to the excitement that is the Sardinian Carnival. It is as though an array of magical creatures and masked figures springs forth overnight. Actors and viewers mix together hidden in masks, lending a magical essence to their persona. Is this person in front of you a friend that you have known for years, or are they simply a masked figure whose identity will forever remain hidden? Visit Sardinia to experience the excitement and magic that this attraction can present. Live through nights hidden from the world in a mask of your own creation. Feel free to do whatever you wish and be whoever you want to be during this unique carnival celebration.