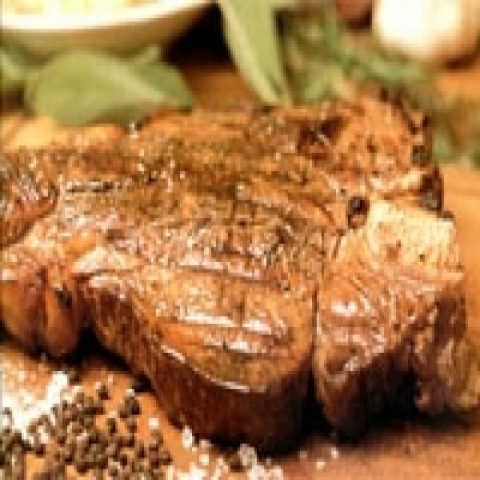 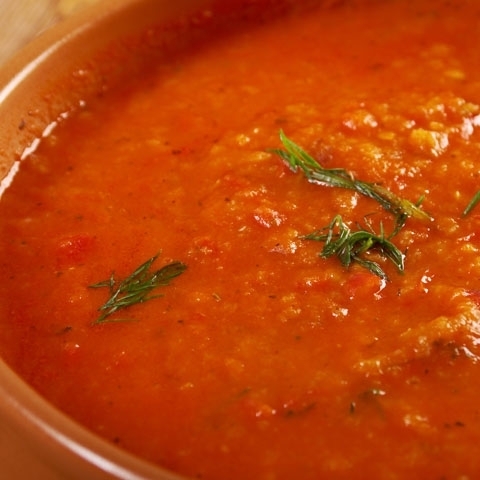 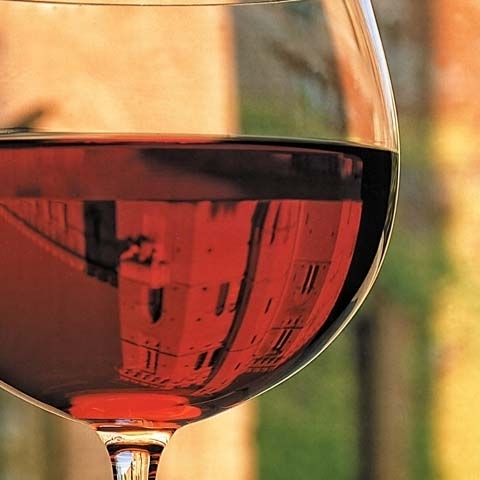 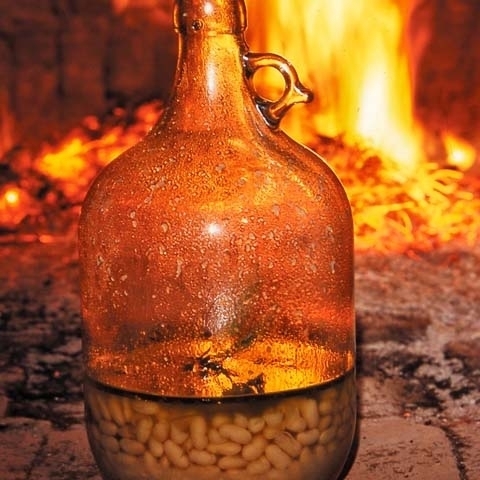 While many have a predetermined idea of what typically makes up Italian food, the reality is that each region and city typically has its own distinct cuisine, cultivated from generations of family recipes, years of regional traditions, and locally sourced ingredients. Florence is no different. Originating from the humble peasant culture of Tuscany, the food found in Florence is comprised of fresh ingredients from the countryside that surrounds the city and is characterized by its rich, yet simple flavors and rustic presentation. As one of Italy’s main food capitals, Florence’s cuisine truly captures the essence of traditional Tuscan cuisine.

The main staple ingredients found within Florentine cuisine are grilled meat such as Florentine beef steak, unsalted bread, strongly flavored olive oil, and, of course, wine itself. Other items that often appear on tables of homes and restaurants throughout Florence are mild cheeses, local produce, and a variety of beans. The cuisine is based on so-called “poor” ingredients, but the decadent and lively flavors produced from these simple recipes creates a food culture that is as delicious as it is appreciative of its modest roots.

Mealtime in Florence, however, is so much more than just the food on the table. Florentines enjoy mealtime as a means for vivid conversation and lighthearted jokes. Wine is as typically as abundant as the joy felt between friends, family, or strangers during mealtime, often enhancing the lively spirit of the already playful and sarcastic locals.

Throughout the city, travelers will find a variety of places to enjoy classic Florentine cuisine. The word “restaurant” in Florence typically refers to an establishment which has a long menu and extensive wine list, perfect for those wanting to enjoy more refined dishes. Trattorie however, are more traditional and usually family run. They tend to offer more local wines and common, regional dishes. An Osteria is an ideal choice for those looking to get a taste of truly seasonal ingredients. These small, rustic eateries have limited menus based on local and seasonal availability and often feature long tables for a family style dining experience.  To experience the local happy hour, visit a Fiaschetterie or Vinai, which serve as a watering hole for locals, offering great wines, panini, crostini, and finger food appetizers. For a quick service experience, Trippai – very small places with a walk-up counter or food trucks – offer local street foods as well as wine. 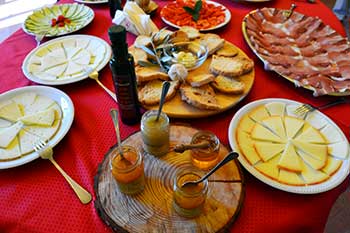 To begin a meal in Florence, expect a variety of appetizers and finger foods that highlight the simplicity of the local cuisine. A typical starter could be as simple as pinzimonio di verdure, which is local fresh vegetables served with olive oil, or as flavorful as crostini di fegato, small slices of toasted bread topped with a liver spread. Traditional Italian style antipasti are also common, such as meat plates or various types of crostini topped with tomatoes, cheeses, or cold cuts. Fresh Tuscan prosciutto is wrapped around juicy melon to create the classic appetizer prosciutto e melone. Olive oil is a major staple of the Florentine diet, and it is celebrated by making fettunta, grilled slices of the traditional, salt-free Tuscan bread that are rubbed with garlic and drizzled with olive oil and sea salt. In every appetizer throughout Florence, the simplest of ingredients are celebrated. 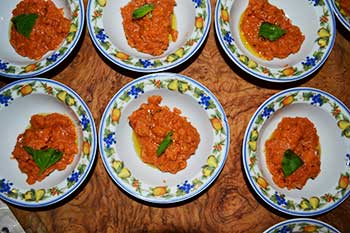 The first course in Florentine cuisine is where the peasant culture history of the region begins to shine through. Most traditional first course dish recipes were created to maximize and utilize all ingredients, letting nothing go to waste. Stale bread is used in both ribollita – a soup created by mixing black cabbage, beans, and leftover bread – as well as panzanella, a salad made of pieces of soaked bread, olive oil, tomatoes, garlic, red onions, basil, and salt. It’s also a key ingredient in pappa al pomodoro, a soup version of panzanella made of the same ingredients with some extra tomatoes.

Unlike much of Italy, pasta is not generally a main ingredient in Florence’s first course, but it can be found in such dishes as pasta e fagioli (pasta with beans) or pasta e ceci (pasta with chickpeas). Another pasta dish typical of Florence is pappardelle. This long, flat, and wide pasta is typically served with game meat sauces. 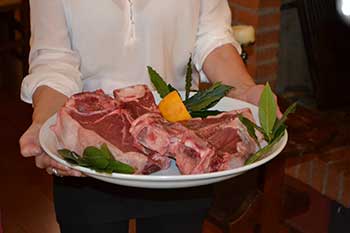 While modern Italian second courses are characterized primarily by meat, old time Florentines would not have had much access to meat due to their large peasant population. Because of this, the recipes that are used today in Florence’s second course originated from noble households. The king of which is bistecca alla Fiorentina, known worldwide as Florentine steak. This steak is the most decadent and delicious meat dish that one can have in Florence, and possibly all of Italy. Cut from the Chianina breed of cattle, this very large porterhouse steak is grilled over a wood or charcoal fire and seasoned simply with salt, pepper, and olive oil just after cooking. 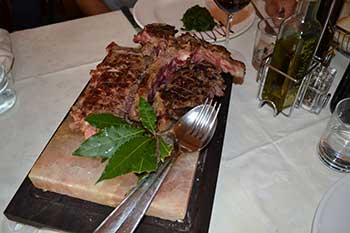 Another iconic Florentine dish for this course is trippa alla Fiorentina, or Florentine tripe. The tripe is cleaned, cooked, and lightly fried with a blend of onions, tomatoes, and carrots. The dish is served warmed with a sprinkling of Parmigiano cheese and a drizzle of olive oil.

Along with beef steak and tripe, diners can expect second course dishes to contain chicken, pork, and a variety of game. Keeping with the tradition of not wasting food, meat is typically served based on the local availability, especially in trattoria, where chefs utilize what’s in season and easily accessible. Rognone, kidneys of animals, and other organs and tissues from animals are always cooked and never wasted.

For the final course in a Florentine meal, the simplistic nature of the Tuscan cuisine is continued. Desserts are often characterized by sweet breads, cakes, biscuits, and other uncomplicated sweet treats. 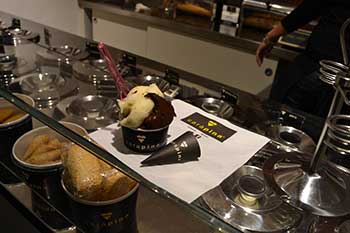 Cantucci is probably the most common dessert of the region and each city has their own version. The Florentine variety are almond biscuits that pair perfectly with sweet wines, particularly Vin Santo. Schiacciata con l’uva is a simple, sweet grape bread traditionally made with olive oil, sugar, and Canaiola grapes from Chianti. Brigidini are wafers made from a thin batter of eggs, flour, sugar, and anisette extract. Another common dessert found throughout Florence is schiacciata alla Fiorentina, a sponge cake with vanilla and lemon sugar.

Dessert in Florence is not complete, though, without Florence’s greatest sweet delight – gelato. History says that it was first created in Florence by Bernardo Buontalenti for a banquet held by the Medici family for the King of Spain. To this day, the masters of gelato call Florence home. The historic center of Florence boasts long lines of visitors and locals alike, waiting to get a taste of the city’s best creamy creation. 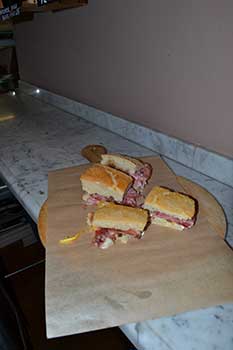 As with any city in Italy, street foods are a quick and easy way to enjoy the city’s cuisine. Food trucks and Trippai offer a variety of quick eats that capture the essence of the Florentine cuisine.

Lampredotto is one of the most popular street cart items. Thinly sliced tripe is cooked in broth and served by itself or on Tuscan bread. The panino tartufato, a truffle pate sandwich, is a gourmet street food that is a well-kept Florentine secret, as it tends to be found only in luxury groceries around the city. For lovers of sweets, bombolone are the go-to street food. These Italian doughnuts are shaped like donuts or filled with cream or chocolate and are often served at events and festivals.

The wine culture of Florence is a key component to the cuisine of the city. Tuscan red wine is the perfect accompaniment to any meal nearly any time of day. Compared to other regions of Italy, red wine in Tuscany is held to higher standards, with winemakers setting their sights on quality over quantity. All the varieties of Tuscan reds can be found throughout Florence, but the most popular are Chianti and Chianti Classico. Other varieties favored in the city are the Brunello di Montalcino, the Carmignano, the Vernaccia of San Gimignano, and the Vino Nobile of Montepulciano. White wines such as the white Vernaccia of San Gimignano and the Bianco of Pitigliano are also available and of high quality, even if the local preference is the reds.