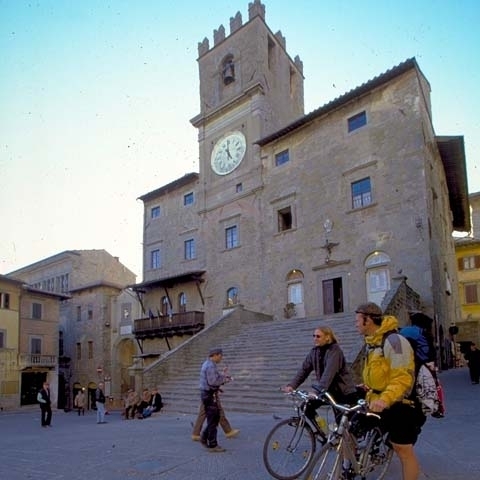 Originally an Umbrian city, it was eventually conquered and enlarged by the Etruscans. Cortona was a prosperous and booming town in the early years, envied by the Romans in the south. This power and prosperity can be seen in the cyclopean walls that once surrounded the city. Parts of the walls can still be seen today. The city flourished under the Etruscans, becoming a beacon of artistic and industrial activity before being conquered and absorbed by Rome around 310 B.C. When Rome fell, the northern Germanic Lombards who were in deep conflict with the Byzantine Empire occupied Cortona.

Eventually, the city would become a free city before its struggles with Arezzo over religious and political freedom. This was an extremely difficult time for the city, and it suffered greatly. Arezzo sieged the city for quite some time and partially destroyed many areas of the city before it was finally ousted in the mid- fourteenth century. The city once again recovered and began to flourish and rebuild. Cortona would once again be conquered in the late fourteenth century by Ladislaus, the King of Naples. He would eventually sell the city to the Republic of Florence. The Florentine rule brought about many positive results, allowing the city to thrive with new construction.

Some of the most famous buildings erected under Florentine rule include the Girifalco Fortress and the majestic Cathedral. As the centuries went on, famous artists were drawn to this area, including Giorgio Vasari and Francesco di Giorgio Martini. The heavy construction of new buildings continued well into the 17th century. The 18th century saw many luxurious mansions being built in the area, including the beautiful Palazzo Ferretti. The city’s architectural heritage was significantly upgraded when many of its oldest building were renovated. Most of these transformations took place in the outer areas of the city, leaving the city center intact and preserved beautifully for generations to come. It has been a long, hard road for this city, but its past struggles have made it stronger and allowed it to flourish into the beautiful town it is today.

Visit the beautiful Basilica of Santa Margherita, located at the top of a hill just outside of Cortona, for stunning views of the countryside.
Tommaso's Cortona Travel...