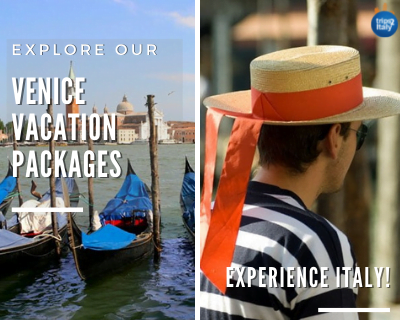 The culture of Venice, or Venezia as the locals call it, is characterized by the uniqueness of its people and the influence of its history. Venice’s reputation throughout the world tends to be based on the colorful decadence of its famed Carnival, though the city’s nickname, La Serenissima, meaning “The Most Serene Republic,” is also appropriate. The city’s bustling streets and passion for individuality is as notable as its noble history and quiet suburbs.

Since Venice’s early days, it has been considered one of the most important cities of the Italian Peninsula. It’s origins as an important maritime republic solidified the city’s rich commerce and valuable connections in the Mediterranean Sea and Far East. The noblemen of Venice were highly committed to cultivating art, philosophy, poetry, and architecture, setting the bar for current day Venice’s deep appreciation for all things artistic. The stunning palaces and gorgeous waters of the lagoon set the stage in ancient Venice for countless parties and social gatherings, influencing the modern-day culture of social enjoyment and connection.

The two most iconic symbols of Venice – the gondola and the Carnival –perfectly represent the city’s culture. 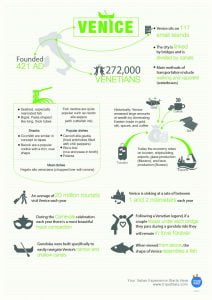 For Venetians, the gondola is not just a method of transportation. It is a reflection of the city’s history as an influential maritime location, as well as a symbol of distinction. The design of gondolas in both appearance as well as craftsmanship is representative of the Venetian value of art. Though the gondolas are practical for transportation, their design is as focused on craftsmanship and efficacy as it is on elegant appearance and beauty. The gondola mirrors Venice itself, as it is a floating masterpiece that is valuable both in practicality and style. Without boats, the city itself would not have been built, so it is no wonder that a boat still captures the true essence of Venice.

The Venice Carnival, one of Italy’s biggest celebrations, is an event that captures the opulence, uniqueness, and vivacity of Venetian life. Featuring amazing and intricate costumes and one of kind Venetian masks, the Carnival evokes a feeling of nobility and exciting livelihood that Venice is so well known for.

Widely considered to be the center of European art and architecture, Venice’s culture can be enjoyed throughout the city in many ways. From the stunning views of the blue lagoon, to the architecture that lines the Grand Canal, to the bustling palazzi, Venice is a place of uniqueness and zest for life.

Art is as essential to characterizing Venice as the floating city’s famed canals and iconic gondolas that float through them. Along with Florence, Venice is one of Italy’s most important cities in terms of artistic expression and influence. In addition to being the birthplace of tremendous painters and the home of important art museums and events that celebrate art, such as the Biennale or Festival of Cinema, Venice also developed a unique painting style and the famed Venetian School.

The history of art in Venice is vast, stemming from the early 15th century in which the Venetian art scene was mainly characterized by the Byzantine style. Since Venice was a noble republic of the time, many wealthy residents became patrons of the arts, causing the city to become an epicenter of artistic culture.

Artists like Tiepolo, one of the main artists who represents the Venetian School, began to emerge and helped to define Venice’s status as a prolific presence in the world of art. Tiepolo, who was born and raised in Venice, painted such masterpieces as “Ripudio di Agar” and “Il Banchetto di Cleopatra.” Another Venetian School painter, Tintoretto, is well-known because he is one of the few painters of the time who wasn’t influenced by the Florence art scene. His work is filled with energy and vivid colors, earning him the nickname “Il Furioso,” or “The Furious.” Other painting styles are represented in Venice’s history as well. Canaletto, a Venice-born artist, is well known for his Venice cityscapes. His amazing depiction of the city’s architecture in “The Entrance to the Canal Grande” is his signature piece. Francesco Hayez, a native Venetian, painted “Il Bacio” (The Kiss), one of the most romantic paintings ever created. He is one of Italy’s most influential painters and his work was always influenced by Venice.

The art of Venice can be experienced firsthand in any of the city’s many museums. The Peggy Guggenheim Collection, The Accademia, and Museo Correr are just a few of the places within the city where one can gaze upon Venice’s artistic treasures.

Being a city that is practically constructed on water, Venice serves as a testament to man’s ingenuity and artistic eye in terms of architecture. Beyond the foundation and set up of the city within the Venetian lagoon, the structures and buildings found throughout Venice are fantastic examples of the achievements of man, and a representation of the city’s rich and diverse architectural style.

Though the styles and designs of Venice’s architecture are varied, the most prominent style one will find throughout the city is Venetian Gothic. This style began in the 14th century and describes Venetian buildings that perfectly combined Gothic, Byzantine, and Ottoman features. The best examples of Venetian Gothic architecture within the city are the famed Doge’s Palace and the Ca’ d’Oro. Though Venetian Gothic is prevalent, Venice also boasts Renaissance and Baroque architecture styles. Some of Venice’s most valued and famed architectural masterpieces include the Rialto Bridge, a stunning stone bridge that spans the Grand Canal, and St. Mark’s Square, the main city square of Venice.

To celebrate architecture, Venice hosts the bi-annual architecture Biennale, an exhibition and convention which gives architects the opportunity to showcase their projects.  The event attracts artists from all over the world and is held in the Arsenale, as well as some sections of Venice’s historic center.

The architecture throughout Venice shows the Venetian people’s mastery in planning and executing given that the foundation of the entire city is water.

Along with being the subject of many iconic books, poems, and plays, Venice is also home to some notable writers who, collectively, help depict in different ways, important aspects of Venetian culture.

Marco Polo, most well-known to the world as an explorer, was born and raised in Venice. Hailing from a noble family, Marco Polo traveled to Beijing along the “Silk Way,” a commercial trade route of the time, on a year and a half long journey that he wrote about in his book, “Il Milione.” This experience and documentation of his exploration led him to become famous as one of the world’s greatest explorers.

Carlo Goldoni, an Italian playwright, was born in Venice and is considered a father of modern comedy. He was the first to renovate the popular commedia dell’arte form of theater by insisting that plays be more focused on realistic characters.

Giacomo Casanova, Italian author of “Story of my Life,” became a historic character for his womanizing ways and quintessential representation of love and seduction. His book is hailed as one of the greatest representations of authentic customs of European life in the 18th century.

When Venice was an important maritime republic, it was often called the “Republic of Music” because someone in nearly every home was known to play a musical instrument or sing. Venice was, by the 16th century, considered to be one of Europe’s most important locations for music. Along with the Venetian School style of composition, the Venetian polychoral style of music gained popularity. The city was a key component of developing the music of Italy.

Famous composers from Venice include Andrea and Giovanni Gabrieli, known for their grandiose style of music featuring multiple choruses and large groups of instruments, Antonio Vivaldi, one of the world’s greatest Baroque composers and virtuoso violinist, and many others, such as Ippolito Ciera, Giovanni Picchi, and Girolamo Dalla Casa.

Venice has been the subject and backdrop of many international and Italian films. The incredible locations and undeniable appeal of the Venetian atmosphere have inspired many filmmakers.

In addition to being a wonderful shooting location, Venice is home to the Festival del Cinema di Venezia, or The Venice International Film Festival. This film festival is held every year in late August or early September and is a segment of the Biennale. Some of the world’s best actors, filmmakers, and directors come to showcase their latest projects.

The Veneto Region of Italy

The Cities of Veneto, Italy