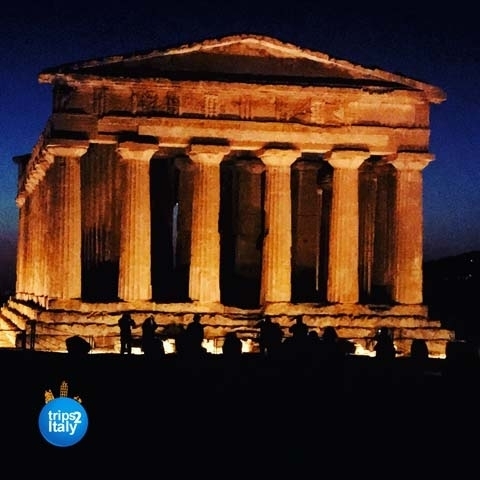 Agrigento once had a different name. When it was founded on that majestic plateau that looks out over the sea, it went by the name Akragas. With the sea on one side, a ridge to the north, and the Hypsas and Akraga Rivers, the town was quite defensible and had a wonderful position for trading. The town sprang up around 582 BC, and most historians believe that colonist from Gela in Greece established and named the city.

No one really knows the meaning of the town’s first name, but one thing was abundantly clear; it was popular. The city’s fame and riches grew quickly, and soon it was one of the most famous of the Greek Colonies. Rulers came and went, and for many years, the town was under the influence of tyrants including Phalaris and Theron. It finally became a democracy after Thrasydaeus, Theron’s son, was overthrown. For many years, the city remained neutral, even in the fight between Syracuse and Athens. However, in 406 BC, the Carthaginians invaded.

The city’s popularity and power waxed and waned over the centuries, but it never regained the same prominence and glory that it once had. Romans sacked the city in the third century, as did Carthage. When the Romans finally captured the city in 210 BC, they changed the name to Agrigentum. Greek was still the main language in the city then and for centuries after though. The town entered another spate of prosperity during the rule of the Romans, and those who lived in the city received Roman Citizenship in 44 BC, after the death of Julius Caesar.

When the Roman Empire eventually fell, the city became a part of the Byzantine Empire. At this point, many of the residents moved to the old acropolis area from the lower areas closer to the sea. While the historians are uncertain as to the actual cause, they believe that it could have been the result of constant invasion from the Saracens, Berbers, and others. Around 828, the Saracens actually captured what was left of the city and renamed it Kerkent, which was Arabic, and was Girgenti in Sicilian.

The city actually kept this name for centuries – all the way up until 1927. At this time, Mussolini’s government changes the name to Agrigento.

As you can see, the area and the city have a long and interesting history filled with prosperity as well as tragedy. The sheer amount of history in the buildings and on the plateau around the city is unlike many other places that one can visit. Those who have a deep love of historical things will certainly want to make sure to take a trip to Sicily to see what Agrigento can offer.

Visit Agrigento's Archeological Museum to admire the humongous Telamon statue from the Olympian Zeus Temple in the Valley of the Temples.
Tommaso's Agrigento...