While the region of Sicily is located in Italy, the threads that make up the fabric of the island’s culture are representative of the diverse cultures that colonized the area over the centuries. Historians trace Sicily’s origins back to the Phoenicians, followed by Greeks, Romans, Muslims, Normans, Spanish, and finally, the Italians. It is even said that if one wants to truly understand the origins of Western civilization, they should look no further than Sicily. These layers of heritage create a vast tapestry of culture that makes Sicily an Italian vacation spot with many diverse cultural influences.

From Arab influences in the architectural styles seen throughout the region to the Greek mythology that is widely celebrated by Sicilians throughout festivals, events, and traditions, Sicily celebrates a little bit of every culture that makes up the region’s long history. 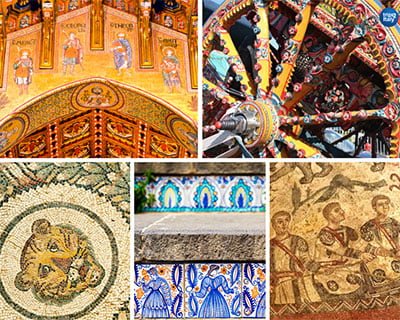 As with any European destination, art is a key component to the culture of Sicily. Over the course of the island’s expansive history, each culture that conquered the region left its mark via artistic statements. From early cave graffiti to iconic pieces of art heralded as integral to major Mediterranean and European art movements, every wave of civilization influenced the creation of Sicily’s modern-day art scene. Sicily can even be credited with the creation of some of the world’s most distinctive artistic trends, such as the Sicilian Baroque and Norman-Arab styles.

As a region with many cultural influences, Sicily boasts many famous painters, all ranging from various styles. The most well-known and influential of which was Antonello Da Messina, whose legacy of introducing oil painting and Flemish techniques still affects the works of artists today. His mastery of building form with color influenced some of the world’s most renowned artists. The majority of his original masterpieces are on display in Sicily today in cities such as Palermo, Siracusa, and Messina. Renato Guttuso, born near Palermo, is another painter whose influences span the entire globe. His works became famous for expressing an anti-conformism and anti-fascist point of view. A true Sicilian patriot, his art represented the fierceness and vivacity of the Sicilian community.

Capable of reflecting the melting-pot of cultural influences and hundreds of years of fascinating history of the region, the art of Sicily is an essential part of understanding and experiencing Sicilian culture.

Many of the cultural influences that shaped the island’s history also shaped the architecture, which features a variety of styles from times gone by. Everything from Greek to Romanic, and Byzantine to Arabic, Norman, Gothic and Baroque can be taken in all throughout the region. 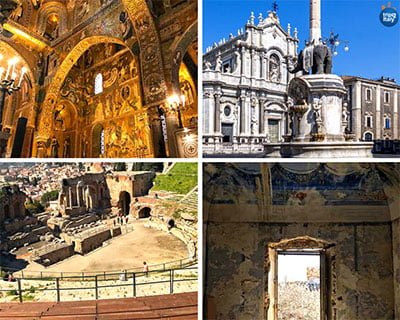 The Greek heritage that remains in Sicily can be seen in the architecture of a few very important buildings. The Temple of Concordia, located in Agrigento, is the largest in Sicily and one of the most well-preserved Doric temples in the world. The Temple of Selinunte, located near Castelvetrano, is dedicated to the Greek goddess of Earth and was a part of the ancient Greek city of Selinunte. In addition, Sicily is home to the UNESCO designated world heritage site, the Greek theatre of Siracusa. This massive ancient theatre overlooks the city of Syracuse and offers a grandiose view of what life in Sicily was like during the Greek reign.

The Romans left behind two amazing wonders in Sicily. The Taormina amphitheater, though first constructed by the Greeks, was restyled by the Romans and now reflects their cultural style. Villa del Casale encapsulates the opulence of ancient Roman nobles with its complex of mosaics. Some architectural enthusiasts refer to the Villa as incomparable.

Other conquerors of the region have left their indelible mark on Sicily as well. The Byzantine influence can be seen throughout the many intricate mosaics such as the Cappella Palatina in Palermo and the Duomo of Monreale. Hints of Arab culture can be found in Norman-Arab architectural style buildings, such as the Cathedral of Cefalu. The Cathedral features Arab influences in the ornate gold elements and large arches, reflective of the architecture typically seen in mosques.

Architectural time periods and styles can be visible across Sicily, as well. In the region’s medieval castles, such as the castle of Siracusa and the castle of Ursino, which feature Gothic themes.  In cities such as Noto and Ragusa, the Baroque design elements are apparent as they were built into the cities after an earthquake destroyed much of the ancient architecture.

When one thinks of the culture of an area, it may be easy to skip over the academic accomplishments that helped shape that culture. But Sicily is home to a couple of the world’s most notable scientists whose discoveries helped to shape the culture of the island, and the world. Born in Syracuse during the Greek reign, Archimedes is widely known as the greatest mathematician of antiquity of all time. He’s known for approximating the value of pi, creating the system of exponents, and was the first mathematician to apply math to physics. In addition, a modern physicist, Ettore Majorana, has been compared to the likes of Newton and Galilei. These intelligent achievers helped to formulate the inquisitive and intelligent standard of excellence the Sicilians take pride in.

Along with brilliant minds, world-renowned artists and stunning architects, Sicily has also been home to some of the world’s greatest writers, no doubt thanks in part to its stunning views and varied culture, providing years of inspiration. Born in Catania, Giovanni Verga was the author of “I Malavoglia” and “Mastro Don Gesualdo”, both considered to be masterpieces of Italian literature. Sicily is described in great detail in nearly all of his works.

Sicily’s musical history is comprised of a little bit of everything from classical and jazz to pop and contemporary. Famed opera composer Vincenzo Bellini was born in the region. Some of his most notable operas include Norma and La Sonnambula. Franco Battiato was also born in the region. His experimental approach to music has solidified his position as one of the last great Italian songwriters. Like all other aspects of Sicily’s culture, the music of the region is created by its long and multicultural history.

Sicily has also made its mark on the world of film, offering some amazing views which have acted as locations for notable productions, providing amazing stories that filmmakers have used as inspiration, and serving as the home country of ancestors to many of Hollywood’s elite.

A true gem of Italy, Sicily is a truly eclectic and fascinating region.