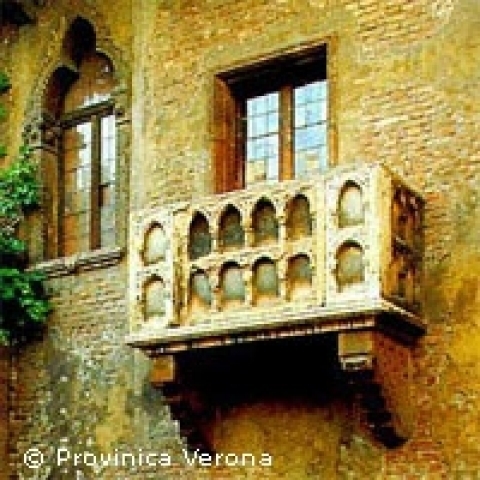 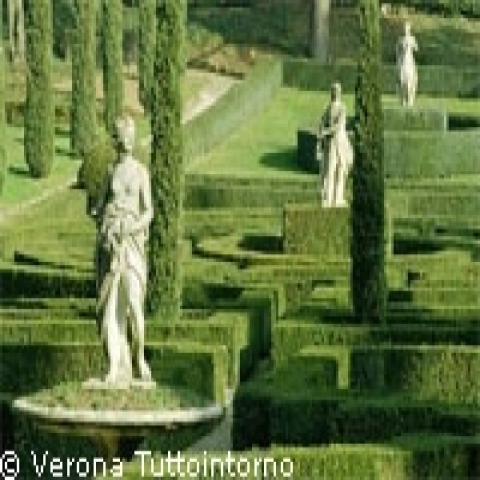 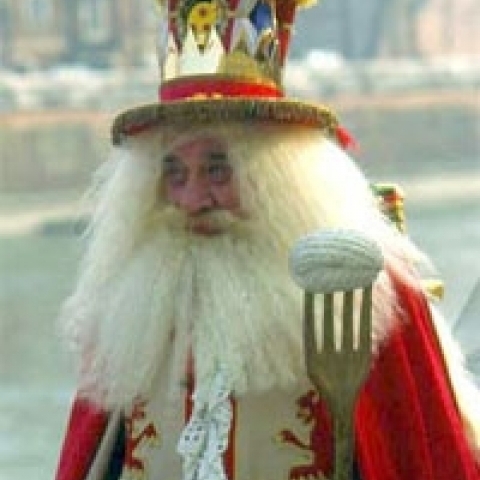 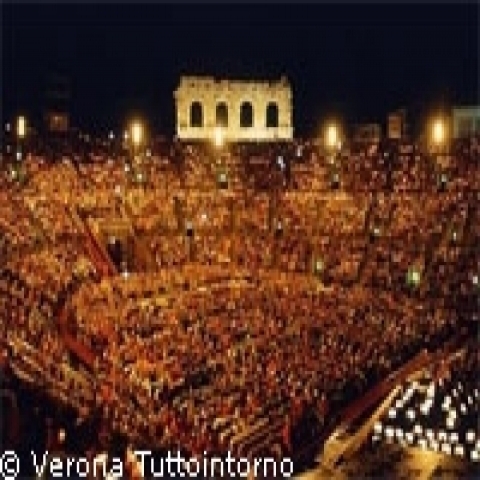 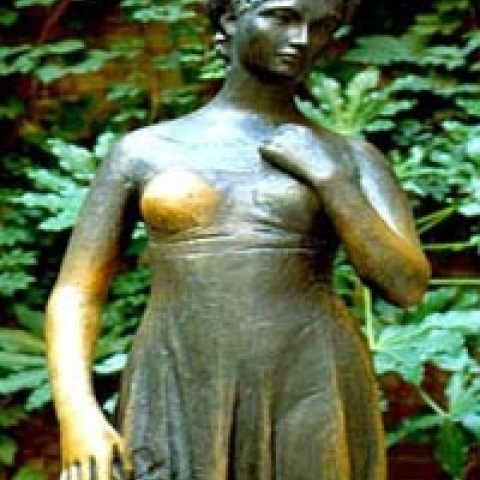 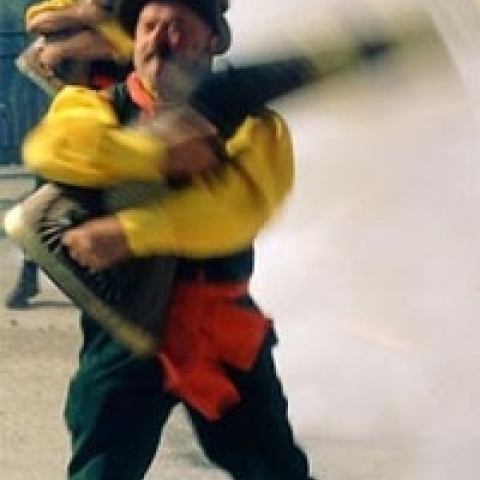 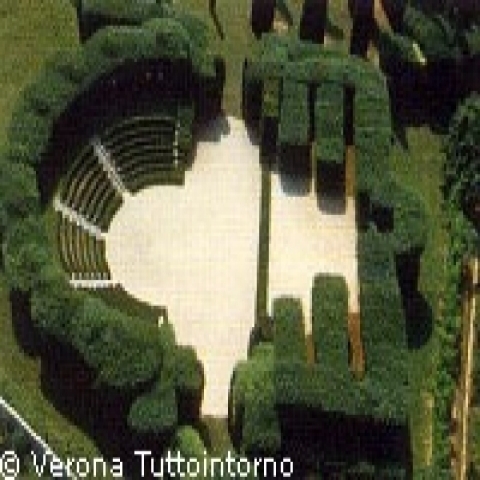 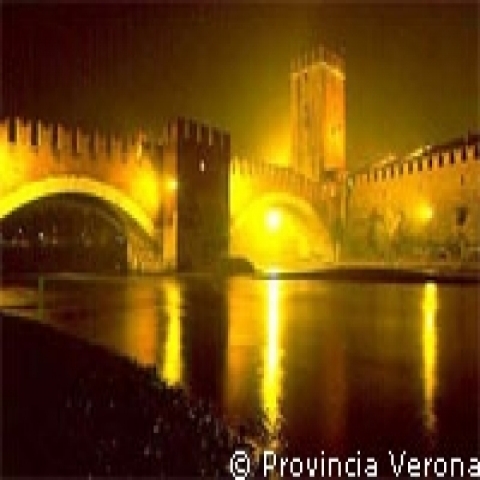 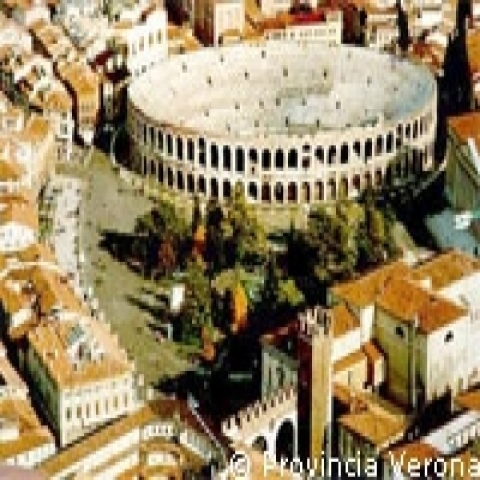 Verona Things to Do

The Arena (The Verona's Amphitheater)

In the heart of the city rises the impressive Roman amphitheater constructed in about the 1st century AD. The elliptical construction with a central open space called the arena was used for thrilling battles between gladiators and conflicts between ferocious wild beasts. The arena in which the spectacle took place soon became the name of the entire structure. The word “arena” derives from “rena,” or sand, which was used to cover the pit where the conflicts were staged.

Of the outer ring primarily built for decorative reasons, only the famous “ala” (wing) remains and is formed by three arches on three tiers. Today the Arena can accommodate a total of 22,000 spectators!

Verona's amphitheater, completed in AD 30, is the third largest in the world, after Rome's Colosseum and the amphitheater at Santa Maria Capua Vetere, near Naples. The interior, still virtually intact, could hold almost the entire population of Roman Verona, and visitors came from across the Veneto to watch gladiatorial combats. Since then, the Arena has seen executions, fairs, bullfights, and theater and opera productions.

Relive the tragic story of Shakespeare's unhappy lovers by visiting some of Verona's fortified houses built at that time, including the homes of both Romeo and Juliet, where you can admire the famous balcony.

Built by Cangrande II between 1355 and 1375, it houses one of the finest art galleries in the Veneto outside Venice (Venezia). It is arranged to give striking views of the castle as well as the exhibits within. Silver plate, 5th-century brooches, a collection of 15th-century Madonnas, suits of armor, swords, noted paintings, all can been seen in the art galleries.

Verona's cathedral was begun in 1139 and is fronted by a magnificent Romanesque portal carved by Nicolo. The highlight of the interior is Titian's lovely Assumption, and outside there is a Romanesque cloister in which the excavated ruins of earlier churches are visible.

One of Italy's finest Renaissance gardens, it was laid out in 1580. It features a juxtaposition of nature and artifice; the formal lower garden contrasts with wilder woods above.

In the center of the square stands an elegant 19th century statue of Dante. Beside it is the Palazzo della Ragione, the Palace of Reason, or law court, both were built in the 14th-century.

This square is named after the city's old herb market. Today there are many stall, that sell everything from herb roasted pig, to delicious fruits, mmushroom, souvenir, etc.... The fountain in the middle of the square is often overshadowed by the market stalls,  the statue in the center is from Roman time.

This famous church is not one but two churches which is apparent from the outside where the apse has pointed Gothic elements rising above a Romanesque base. The lower church begun in 1065 by Benedictine monks on the site of an earlier sanctuary, has frescoes on the simple arcades. The more impressive upper church dates from 1313 and is covered with a ship's keel roof. The interior also boasts medieval fresco work including a 14th-century section by Stefano da Zevio depicting Musician Angels.

Begun in about 1530, this lovely domed Renaissance church features the famous Martyrdom of St. George by Vernonese at the altar, and above the west door is the Baptism of Christ, usually attributed to Tintoretto.

An impressive church dedicated to Verona's patron saint, it is the most ornate Romanesque church in northern Italy. Built in 1120-38, the facade is adorned with an impressive rose window, marble reliefs, and a graceful porch canopy. The highlight, however, is the fascinating 11th-and 12th-century bronze door panels. The Romanesque and Gothic cloisters are part of the former Benedictine abbey.

It's no coincidence that Verona plays host to VinItaly, the country's major wine fair, the city is the hub of a thriving wine-producing region. Sant'Ambrogio de Valpolicella, just west of Verona, is wine country noted for the fruity red wine. Soave, which lies in the surrounding area, is best known for its dry white wine. The fortified town is enclosed by Gothic defensive walls, hemmed in by towers and crowned by a castle known as Rocca Scaligeri, named after its 14th century founders.

Connecting Castelvecchio and Adige, this powerful bridge was first built in the 1st century AD, destroyed during World War II, and rebuilt using parts of the original structure.

Build in the 1st century BC, little survives of the stage area, but the semicircular seating area remains larges intact. It has wonderful views over Verona and in the foreground is only one of three Roman bridges to have survived.

This scenic vineyard estate is located in the heart of Veron's Valpolicella region, which produces a full spectrum of fine Veronese wines.