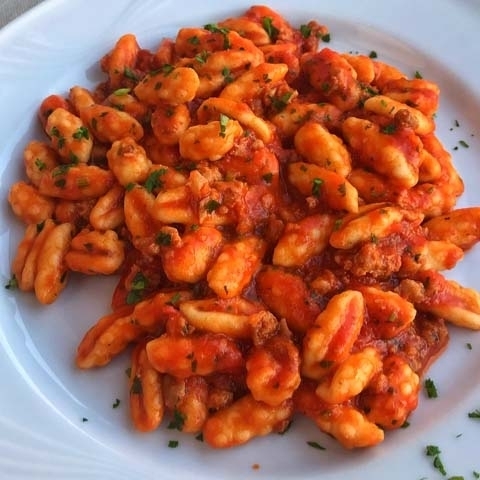 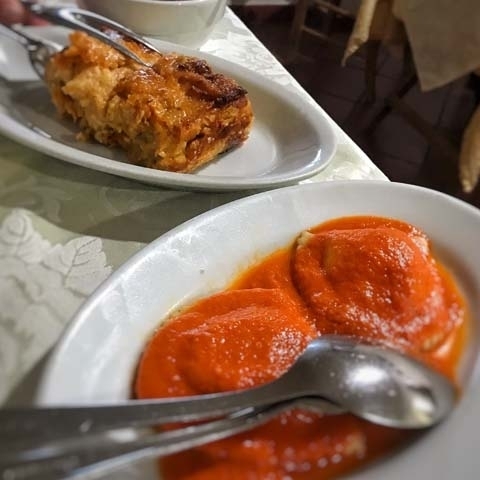 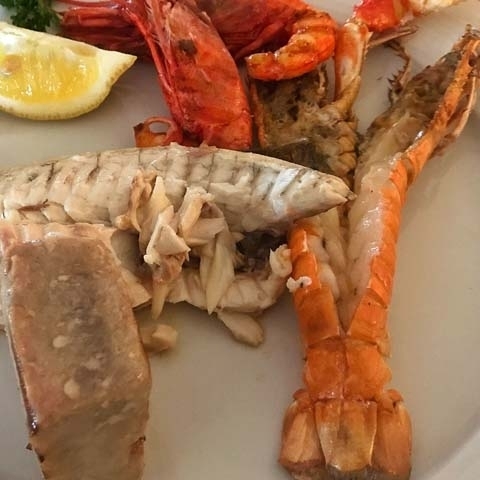 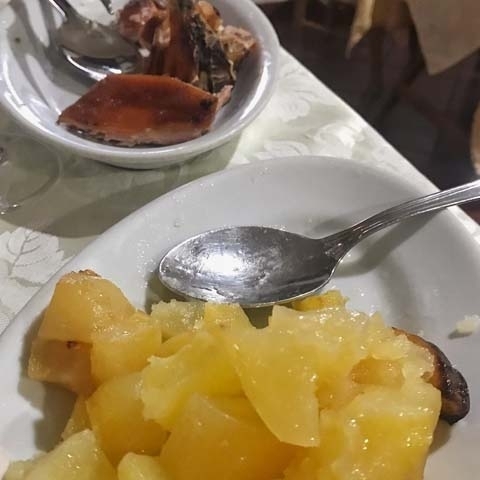 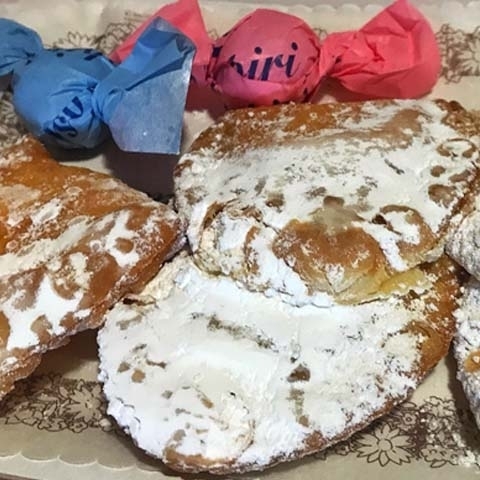 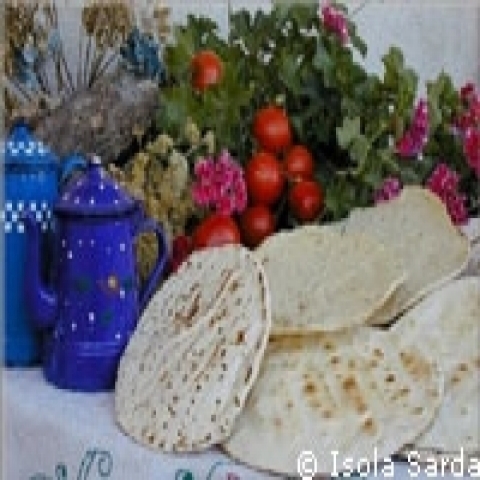 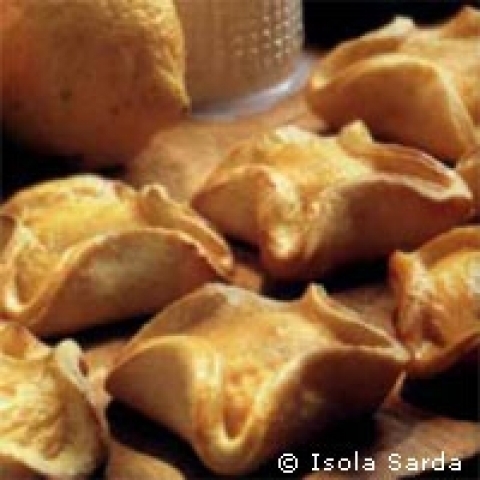 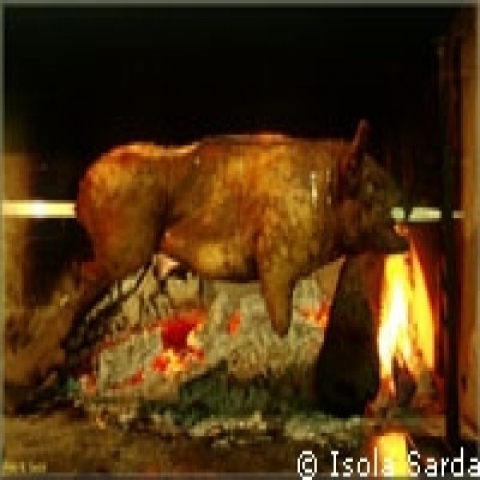 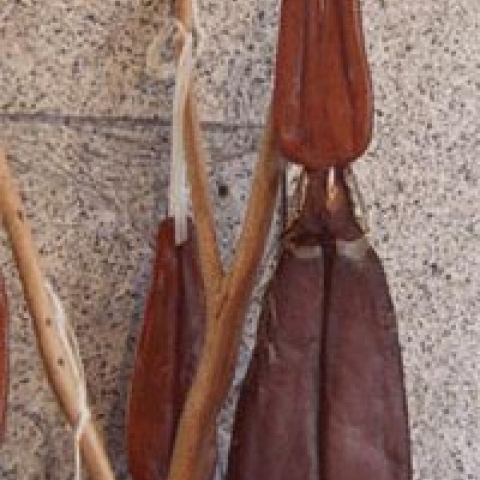 Sardinian cuisine is wonderfully eccentric, influenced by foreigners,Spaniards in particular, and by other Italians. It is as famous for its "surf" as it is its "turf".  Not only does it offer great seafood, but also offers exquisitely flavored, roasted meat.

The fertile farmland offers great produce (the woodlands are full of exotic mushrooms), and the interior of Sardinia produces its famous varieties of cheese, and different varieties of wine. The sunny island boasts ideal natural conditions for things that grow, as attested by the fact that Sardinia is Italy's leading producer of organic produce, accounting for nearly a third of its land cultivated by biological methods. Tomatoes (often sun-dried) are used generously in sauces, as are artichokes, fava beans, peas, eggplant, and zucchini. Foods here are scented with herbs, including wild fennel, juniper, and myrtle, and used with hare, boar, and game birds.

The rugged coasts provide such delights as rock lobsters, crabs, anchovies, squid, clams, and sardines. Sample spicy fish soups such as burrida (inspired by the popular Ligurian dish) and cassola (a Spanish-inspired recipe).  At Oristano, they dry mullet eggs into blocks of delectably pungent bottarga or buttariga to slice thin over pasta or salads. Arelle or coocciule (clams, called vongole elsewhere in Italy) are a favorite with spaghetti.

A typical Sardinian seafood buffet may include sardines fried with tomatoes, marinated octopus, fresh tuna, and lobster all served with aubergines, and sprinkled with oil and sweet and sour onion.

Traditional Sardinian meats are spit-roasted suckling pig, baby lamb, and kid. The more adventurous might want to try sa cordula, cleaned lamb intestines sauteed with peas, or knotted into an intricate braid with variety meats and oven- or spit-roasted. Another specialty is sanguinaccio, a pork-blood sausage sweetened with raisins and sugar, served boiled or roasted.

Well-known for its cheese,Sardinia produces 80% of Italy's pecorino, including pecorino romano (a drier, sharp cheese once made in Lazio but now mostly produced in Sardinia). Fiore sardo, "the flower of Sardinia",  is the original Sardinian cheese. Dolce sardo is a softer, milk cheese. Also notable are its milk cheeses, caciocavallo (or casizolu) and provolone. For the adventurous, there is casu marzu (literally, "rotten cheese"), said to be piquant and delicate, is made for home use, but not sold commercially. It is produced when tiny white larva form in the cheese, gradually reducing it to a creamy consistency.

Bread is as much an art form as a staple in Sardegna, there are said to be about 400 varieties. Special breads, in the shape of castles or towers, or nativity scenes, are prepared for special occasions.

Each Sardinian village bakes its own variations of tundus (large round bread); doughnut-shaped cozzula; or stick-like zicchi, although names may vary. The flat, twice-baked pane carasau, and its crisp variation called carta da musica (music paper), which was introduced by the Arabs in the 8th or 9th century, is the best-known bread. It is also the base for many other Sardinian dishes. One version is heated and brushed with olive oil and salt and is called guittiau or istiddiau. Another version is called panni frattau which also includes eggs, onions, pecorino cheese, tomatoes, and meat broth. Discover faine', made with farinata (chickpea flour) and baked with olive oil and various condiments. Or, sample panadas (savory pies made with various fillings) introduced by the Spaniards.

Try Sardinia's unique pasta: malloreddus (little calves) are semolina dumplings flavored with saffron, and sometimes served with a ragu' of sausage and fennel or red mullet; usually served with clams, Sa fregola is similar to couscous; Culurgiones is ravioli filled with fresh pecorino, spinach or beet greens, and sometimes meat and/or potatoes, and is served with a tomato sauce with grated pecorino.

Other pasta shapes are lorighittas (spirals) and pillus (taglioni). Another type of pasta is busa, or maccarones de busa, or maccarones a ferrittu (shaped around knitting needles) and is traditionally served in lamb broth or wild boar meat. Ultra-thin pasta in broth is called filindeu (God's hair), which is a derivative of the Spanish noodles called fideos.

Sardinians love their desserts, and each occasion will produce a wide variety. Honey, cheese, ricotta, almonds, and fruit are the main ingredients. One of the more unusual is gatto', a concoction of chopped almonds, with honey or sugar and orange peel, and shaped like a nuraghi. Or, sample culurgjones de mendula (half-moons, filled with almond paste, honey, or orange blossom water); papssinos (diamond-shaped and made of raisins, pine nuts, walnuts or almonds, and colorful sprinkles); almond amaretti (softer, more crumbly than the mainland variety); culurgjones di ricotta (filled with ricotta and deep fried); or caschettes (resembling a white rose, made with honey, cinnamon, and hazelnuts, and traditionally given to brides).

One of the island's classic desserts is sebadas (said to date back to the nuraghic era) and served in nearly every restaurant. These are made with unleavened dough, filled with ricotta, bran, and orange peel, fried in hot olive oil, and sprinkled with a slightly bitter honey made from the arbutus (strawberry tree) blossoms.

Sardinia's vines tell a story of their own. Native red varietals are cannonau, bovale sardo, monica (of possible Moorish descent), and carignano. Cannonau is the most famous and is made from a grape introduced in the 13th century by the Spaniards. White varietals are vermentino (of Spanish descent) and nuragas.

Four- vermentino, moscato, cannonau, and monica- are DOC (meaning that the wine comes from a defined area and was produced according to certain traditional methods).

Many red and white table wines (Nuragus, Barbera, Cannonau, and Moscato) are produced in the Campidano plains, and others areas make excellent aperitif wines (Vermentino and Vernaccia).

Two characteristic alcoholic beverages made in Sardinia are mirto, flavored with native myrtle berries, and filu'e ferru, distilled from the grape dregs left over from winemaking. The latter name derives from sticking a wire (filu) made of iron (ferru) into the ground to mark the liquor's underground hiding place. The locals were driven to distill their own liquor and then hide it under a trapdoor due to high government taxes. The hidden liquor could be found by attaching a piece of wire to the door.

Sardinia is famous for its dessert wines. Vernaccia of Oristano is the most famous and is comparable to a Marsala Superiore. Another wine from cannonau, is called Anghelu Ruju after the nearby necropolis.

You'll discover liqueurs distilled from lychees or lemons; prickly pears are made into Fico d'India, and Corbezzolo is made from the fruit of the arbutus (strawberry).

Villacidro, made in the village of the same name in Cagliari province, produces two colors of wine: yellow if it's made from saffron, or white when made from a blend of herbs.

Be sure to eat plenty of pecorino cheese!
Tommaso's Sardinia...