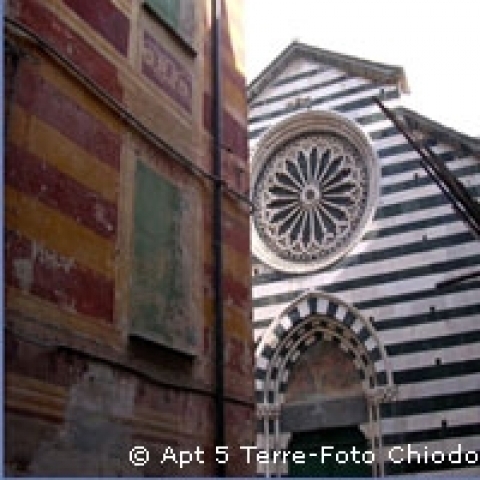 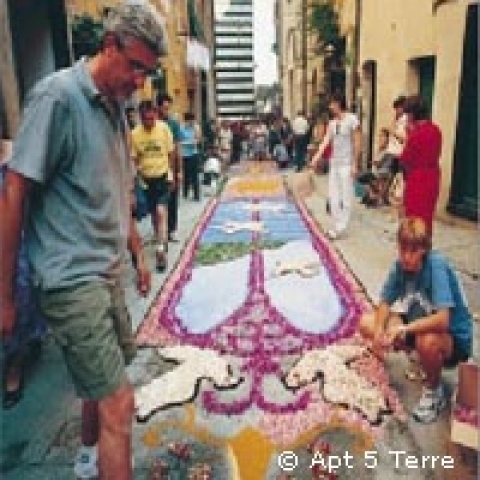 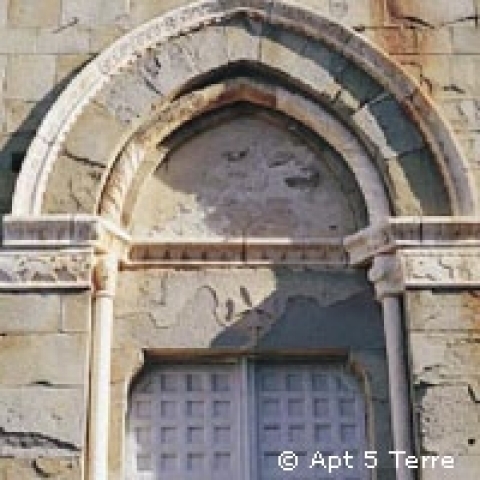 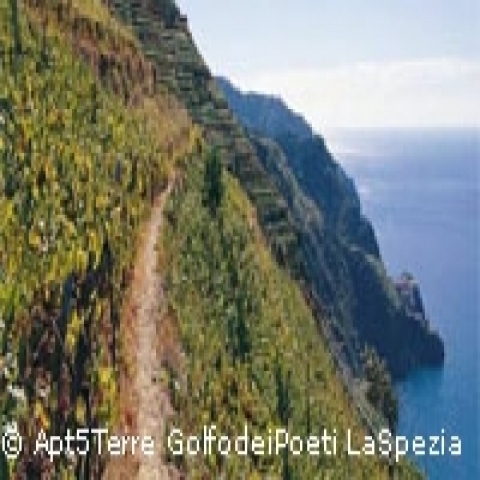 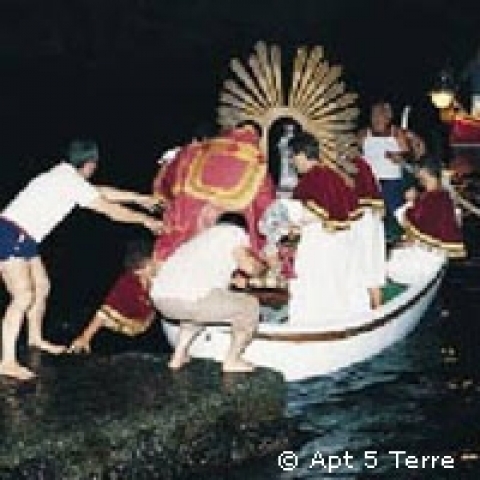 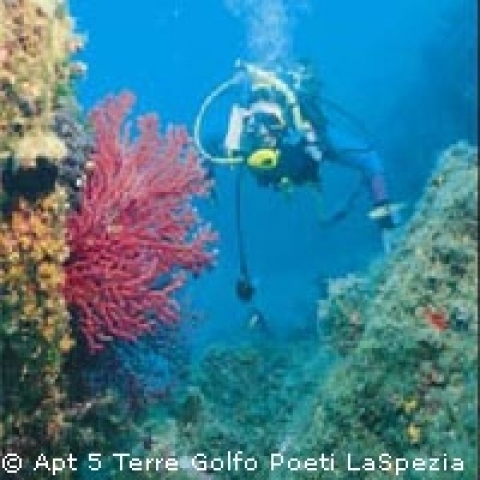 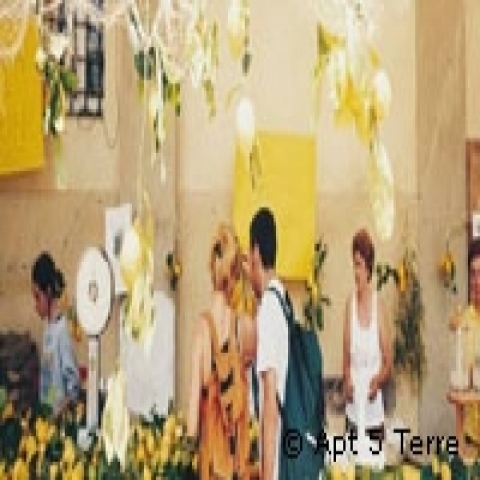 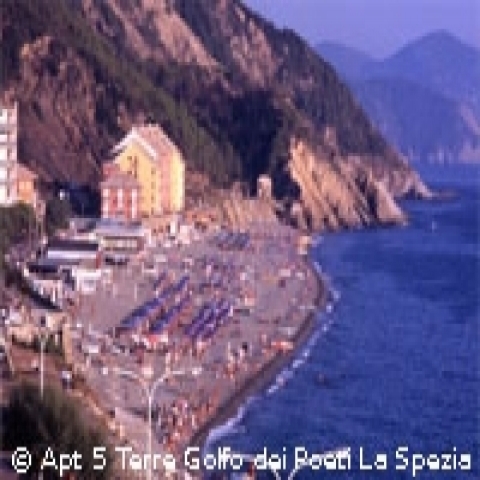 Cinque Terre Things to Do

It is the largest village of the Cinque Terre, more than the others it's a small tourist resort with some nightlife and the only sandy beach. Its name comes from the Latin word "Rubra" referred to the reddish color of the mountains at the sunset, or it could, also, comes from "Rufus", the name of the lord of the castle whose hair were red. Nowadays the town is divided in two parts: the ancient original settlement is called the old Monterosso, and then there is a new modern residential quarter called Fegina, from the name of the bay, or New Town. The centre of the original village is very old and interesting: ancient carruggi (small streets) and the beautiful parish of San Giovanni Battista offer an unforgettable memory of that village facing of the sea. Many shops and enoteche (wine shops) are the right place to by typical souvenirs and to taste the so rare dessert-wine "Schiacchetra'" or the dry white wine "Cinque Terre". On the top of the village there are the Convento dei Cappuccini (Cappuccini's monastery) and the ruins of the old castle from where visitor can enjoy the view of an incredible landscape. The new part of the village is extending along the promenade ending up at the feet of the huge statue of the Gigante (the Giant), representing Neptune.

Vernazza, the ancient latin "Vulnetia" or "Vernacia" is considered the pearl of the Cinque Terre villages. It is the only natural port of this coast. The small square on the sea, the sandstone medieval church of St Margherita di Antiochia and the colored tower-buildings decorated with porticos and portals create one of the most beautiful landscape of the coast. From the castle 1000 steps above the village you can enjoy an exciting view of the coast. In one of the little restaurants on the piazzetta (little square) facing the small port, you should try the tegame vernazzano a typical dish made with fresh anchovies.

Corniglia from the roman name of Cornelius differs from the others five towns thanks to its elevated position on a cape above the sea. It a nice ancient village, quiet and pleasant, connected to the sea by 365 steps, as the year's days, called the "Lardina". Despite its position quite far from the sea, it offers wonderful views. It was built around the year 1000 and its charme is conserved by the stone building and ancient key-vault of remarkable beauty. From the terrace over hanged at the end of the village you can admire the ancient Valle dei Mulini (the Mills' Valley), which nowadays is intensively cultivated. Very nice the Guvano beach. Don't miss the "Stappamaggio", the Sciacchetra' wine festival on May.

The name is probably deriving from "Manium Arula" (the dead souls) Temple probably from the first Roman settlement. This colorful village, perched on a steep cape of dark rock, is the quietest one. Its harbour is like a terrace and the boats seem hanged from few fabulously colored houses. Up the hill the vineyards reign the landscape and give a white and dry wine, the "Cinque Terre" wine. Visit the XIIth century bell tower and St. Lawrence's Church on the main square. During the Christmas don't miss the famous open air lighting Presepe (Christmas Crib) on the hill.

Its origins date back to the end of the XIIth century. Once it was called "Rivus Major", like the bigger river that crosses the village. Very suggestive is the road that leads to the sea, framed by typically colored case torri (tower houses), developed on three or four floors with no more than two rooms per floor, side by side to each other. The path to Torre Guardiola, which starts from the small Fossola beach, is a very interesting botanic and naturalistic trail. And another famous and unforgettable path is the Via dell'Amore (the path of Love) that link Riomaggiore to Manarola.

la via dell'amore (the love path)

The most famous short trial of the Cinque Terre is the Via dell' Amore, linking Manarola to Riomaggiore and partially cut out of the steep cliffs overlooking the sea for a romantic promenade.

Amongst all this charming land's paths, his is the most spectacular one. It was made, over the centuries, by those who used it to move from one village to another and in many parts it is a mule track. Although anybody can take the walk one must remember that the ground can be slippery and, in places, the path is steep and narrow. Take care. From Riomaggiore to Monterosso, through paths, mule tracks, the famous Via dell'Amore and inside the villages, it is 12 km long and reaches a height of 200 meters at Prevo, a small but interesting locality near Vernazza. The entire itinerary is marked by a white stripe and sky-blue stripe and it takes about five hours without stops in the villages. Take care and enjoy the breathtaking view.

Besides the natural treasure, Cinque Terre land is worthy thanks to its late Romanesque architecture. The main are San Pietro of Corniglia, probably the most ancient, San Lorenzo in Manarola dominating the village and San Giovanni Battista in Monterosso with its Genoese facade in black and white stripes: All of their facades have beautiful Romanesque stone rosettes. The Riomaggiore church with its two 14th century side portals is also worthy of note. The church in Vernazza, the only one built on the sea in the protected inlet of the Port, has a fascinating octagonal bell tower. Each village has ancient sanctuaries built on the winding hill road with a wonderful panoramic view.

It may seem like a legend, a fairy tale from other epochs brought to the world from the voices of travelers here that poetry has found its horizon and its home. Between the pinkish shadows of its hamlets, in the bland movement of its hills, beyond the very deep blue of its sea, this discreet land reveals with your footsteps the miraculous dream of Shelley, Petrarca and Montale, the mystery of the perfect harmony of a unison song between man and his sea, his land. The Gulf of the Poets, the Gulf of La Spezia, is a unique microcosm, but so far from the common places. Whoever crosses its borders of steep cliffs and high pine groves, knows t's beginning a voyage of astonishment and wonder, even after so many centuries, scenery that still penetrat's gaze until it mingles with the soul of the one walking it.

Portovenere is a picturesque village built during the Roman period on a rocky peninsula surrounded by the sea and the three small Islands of Palmaria, Tino and Tinetto. Legend tells us that even the beauty goddess Venere was fascinated by its splendor. Saint Peter Church, the Grotto of Byron, the castle of Saint Lawrence's church are worthy for a visit. Don't forget to taste fresh fish on the "calata", the famous and picturesque promenade.

The exhibition assembles painters coming from the entire peninsula who paint along the streets of Manarola village.

The entire village gets decorated with lemon leafs and fruits, so you can walk around the town and smell the intense flavor of the original lemon from this area. At the end of the day, there will be a prize awarded for the biggest lemon of the year, that local farmers have brought down for their own land.

To celebrate the holy Corpus Domini, a procession on a suggestive flowery carpet.

A Festival with a villagers procession, fireworks and a big fire.

A traditional celebration of the Patron Saints of the Corniglia village and its inhabitants.

Enjoy with all the native villagers this celebration of St. Margaret, the patron of the village.

Several concerts of classical and religious music at Soviore Sanctuary.

On this particular day by the main square in Monterosso you can get a free taste of the fresh salted anchovies caught by the local fishermen in the bay of Monterosso and drink some good "Cinque Terre" white wine made by the farmers who use their own grapes. Afterwards at the end of the day, after dinner, you can join a night of dancing in the square until midnight.

A traditional celebration of the Patron Saint of the village: Saint Lawrence.

This celebration in honor of  Portovenere's patron saint begins with light torches placed by the villagers along the enchanting promontory  and a walking procession around Portovenere carrying a picture representing the Madonna. At the end there are fireworks.

Theatrical performances with women as protagonists, which takes place in the evocative background of St.Peter's Church, right beside the sea.

A traditional and evocative open-air exhibition of antiques along the streets of Sarzana's historical center.

The exhibition takes place in the enchanting background of Firmafede Fortress where furniture, valuable antiques and jewels are displayed.

A local handcrafts fair in honor of the Rising Mary.

manarola - the presepe, december and january

The famous open air lighting Christmas Crib on the hill: more than 200 figures and 12.000 lamps for the biggest lighted nativity in the world, thanks to the work of the local Mario Andreoli.

If you're traveling with your significant other be sure to walk down the Via dell'Amore (The Way of Love), a path that connects the villages of Riomaggiore and Manarola.
Tommaso's Cinque Terre...