The monumental Sforza Castle is located in the heart of Milan, in the city’s historic district. While Milan is Italy’s capital of fashion, design, and international business affairs, the city also holds an abundant amount of the country’s history. Sites and monuments in the historic city center include Parco Sempione, the Milan Cathedral, Porta Sempione, the Arena Civica Gianni Brera, and of course the Sforza Castle. 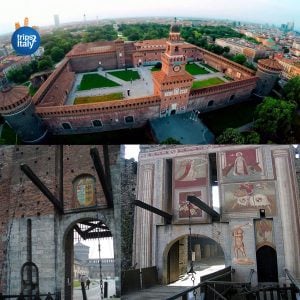 The Sforza Castle is one of Milan’s most popular monuments. An iconic symbol of Renaissance Milan history, the castle is known for its massive size and iconic red brick. Originating as a Visconti fortress, the castle has gone through a variety of transformations throughout its many centuries. During its lifetime it would become a defense fortress, house military barracks, and eventually serve as the home of the powerful Sforza family.

The House of Sforza ruled Milan during the Renaissance period. They were a mighty dynasty and transformed the castle into a palace fit for royalty by commissioning some of the greatest artists of the time (Bramante, Da Vinci, etc.) to decorate and embellish the castle. Fittingly, the Sforza Castle today serves as an homage to the cultural and artistic style of the Renaissance, featuring a variety of museums, libraries, and art collections.

The castle sits in a square of the same name and boasts stunning architectural elements such as the 70-meter-tall Filarete Tower, a variety of circular keeps, Renaissance-style archways, historic gates, and vast, elegant courtyards.

People of all ages, both tourists and locals, come to the Sforza Castle to immerse in the history, art, and culture of the castle’s architecture and museums. The natural beauty of the nearby Parco Sempione, which can be accessed by the castles gorgeous courtyards, makes the complex a wonderful destination for weekend relaxation and reflection.

History Of The Sforza Castle

The Sforza Castle was originally constructed in 1358 at the order of Galeazzo II Visconti. At the time it was called Castello di Porta Giova, and over time, the successors to Visconti took over and expanded the castle until its sides were 200 meters long and walls were 7 meters thick.

In 1447, the castle was destroyed by the Golden Ambrosian Republic, a short-lived government created in Milan. In the 1450’s, after overthrowing the republicans, Francesco Sforza – the founder of the Sforza dynasty – began to redesign and fully reconstruct the castle. Over the years, artists like Leonardo da Vinci and Bramante were chosen to help decorate and adorn it.

From the 1500’s to 1800’s, the castle was occupied by various foreign countries, including France, Spain, and Austria. At one point it was used as military barracks for the Italian Army. After the unification of Italy, the castle was no longer used for military purposes and was given to the city of Milan. Restoration took place by architect Luca Beltrami.

When rebuilding the castle, Francesco Sforza enlisted an architect and sculptor by the name of Filarete, also known as Antonio Averlino, to design the central clock tower – a key feature of the Milan skyline and the most recognizable aspect of the castle. During the restoration period in the 19th century, the famous clock tower – which had been destroyed by a lightning strike – was rebuilt based on 16th century drawings. 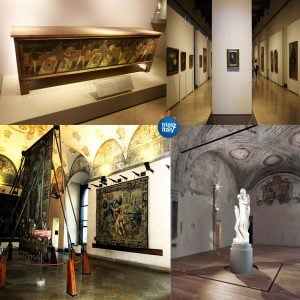 Today the Sforza Castle serves not only as a historical monument but also a home to many of Milan’s Civic Museums. In fact, the castle is one of Milan’s most vast collections of artistic works. The specialized museums within the castle reflect the long cultural and civic history of Milan from nearly every angle. They contain everything from antique paintings and sculptures to period pieces such as furniture and musical instruments. Some of the castle’s museums include: 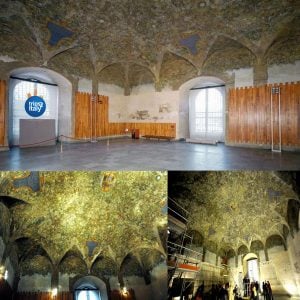 The Sala delle Asse (Room of the Tower) in the Sforza Castle features one of Leonardo da Vinci’s most interesting paintings. He painted the ceiling of the room with images of entwined branches that rise from 16 mulberry tree trunks which flank the walls. The frescoes feature vegetation, fruits, rocks, and the Sforza coat of arms.

In the castle’s Museum Pietà Rondanini sits Michelangelo’s final work of art. Though unfinished, the marble sculpture (titled Pietà Rondanini) epitomizes his early style. It is said that the sculpture was the third and final version of the same idea – Virgin Mary mourning the loss of Christ.

Some say the sculpture is not unfinished. Rather, it was conceived to reflect a work in process, which appears differently to viewers as they move around the sculpture. However, given that Michelangelo worked on the piece up until his death, we will never know.