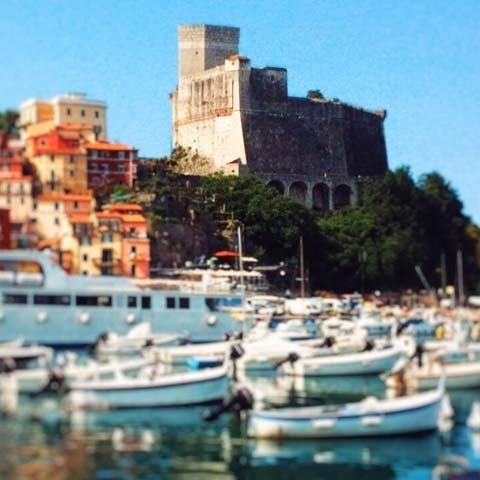 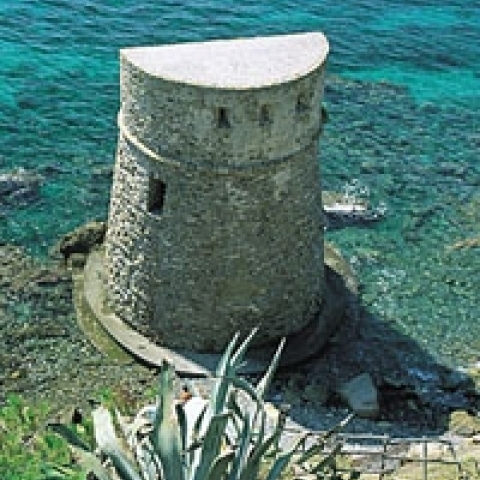 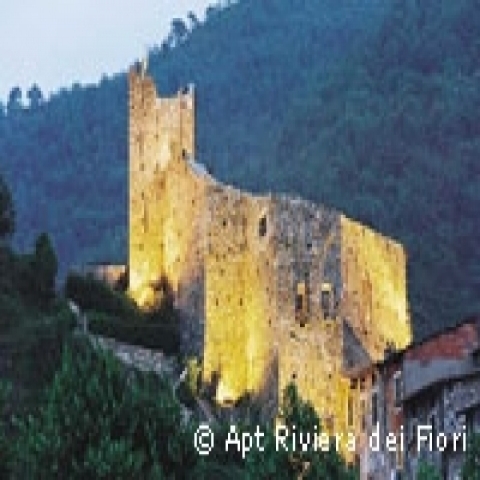 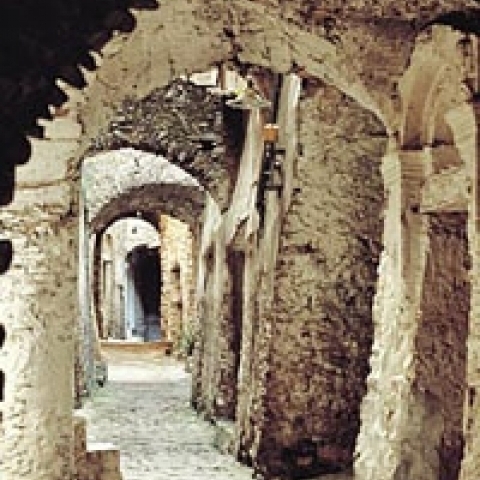 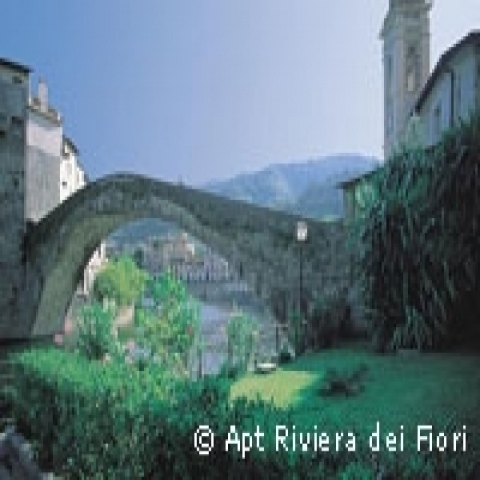 Liguria is the second smallest region in the Northern Italy, after Aosta Valley. The region appears as a narrow arch of mountainous territory overlooking the Ligurian Sea. Geographically speaking, Liguria stretches from the mouth of the river Roia to that of the river Magra, and it includes the southern slope of the Ligurian Alps and Ligurian Apennines.

The mountainous chains are separated by Cadibona hill and the coexistence between the mountain and the sea in a landscape with almost no plains is the main characteristic of the region, having a strong impact on its history since the earliest times.

The capital of the region is Genoa. Historically, Genoa has been one of the most active poles in the Mediterranean trade, engaging in maritime business as a supplier of raw materials for the construction of ships, food, and manpower to the hinterland.

Along with the industrial development and mainly during the Second World War, Genoa has become one of the main centers of the famous Genoa-Milan-Turin triangle, not just as a “gate” for raw materials and finished products, but also from an industrial point of view.

At the same time, the spread of tourism has made the coasts along the whole region one of the most popular vacation destinations in Italy.

Starting from the beginning of the 1980s, the heavy industrial crisis, the competition with other Mediterranean ports, as well as the tourism saturation have downplayed the economic role of Liguria in the country. Today, the region focuses on the development of quality agriculture and on a more conscious and environmentally friendly tourism, in an attempt to make the regional capital a true service center and a cultural center at the European level.

The name of the region has ancient origins. It comes from the Ligurians, a population that inhabited the territory for the first time in history. Originally, Ligurians inhabited not only today’s territory of the region, but a vaster area that stretches between rivers Rhone and Arno.

During the division of Italy in the Augustan age, the IX regiment Liguria had a much larger extension compared to today’s territory, and it also included the northern slope of the Apennine mountains up to the river Po.

During history, the name was also used to indicate a larger region that goes well beyond today’s administrative boundaries.

The most ancient testimonies of human presence in the current administrative region of Liguria originate from the territory between the Grotta del Principe and Balzi Rossi, in the communal territory of Ventimiglia. Excavation campaigns unearthed numerous remains belonging to the upper Acheulian industries. The findings are associated mainly with fauna, more precisely representations of deer and other wild animals.

From the same period, a fragment of a human iliac bone attributed to a Homo Erectus was also discovered. The age of this bone fragment was established through gamma spectrometry and it is attributed to being over 230,000 years old.

Liguria has few other reports of such ancient industries, while the middle Paleolithic era is much better represented. The Mousterian findings are present in the Tyrrhenian area, mainly in the cave Madonna dell’Arma and in Taggia. The remains in these areas are dated back to 95.000 years ago. Other important complexes worth mentioning are present in the areas between the communes of Torri and Barma Grande.

In upper levels of the grotta del Principe, in the grotta Delle Faje and Balzi Rossi is a series of testimonies belonging to the early stages of the Würm period, represented by some lithic complexes. Moreover, a series of Mousterian remains have also been individuated in Mochi and some areas around Balzi Rossi.

From the Mousterian phase, we can pass to the archaic phases of the Upper Paleolithic. The most important artifacts were found in Mochi. Also frequent are the representations of the Aurignacian culture, above all in several caves in the Balzi Rossi area. Some of these sites are actually burial sites attributed to this culture or those that followed.

The testimonies belonging to the Gravettian era overlap with the Aurignacian in the Mochi area, and there are also traces of complexes belonging to various phases of the Epigravettian era, in particular in a series of caves at Finale Ligure.

From the prehistory of Liguria, it is also worth mentioning a series of early artistic manifestations. In Caviglione Cave a beautifully engraved horse has been discovered, while intricately painted pebbles have been found in the Arene Candide cave. Both forms of art belong to the Epigravettian industry.

In Barma Grande, about fifteen female statuettes sculpted in steatite were discovered. Sadly, the stratigraphic origin of these artifacts is unknown.

Another extraordinary burial ground has also been individuated in the Epigravettian levels of Arene Candide. In the same complex, the presence of fifteen burial sites whose bodies were supplied with tools made of grindstones and garments made from squirrel fur have been found. These sites are attributed to the late Epigravettian stage and they constitute one of the oldest Paleolithic necropolises.

Remains from the Neolithic era were found in numerous caves near Finale Ligure. To this era are attributed some statues belonging to the Lunigiana era, while other findings date back to the Iron Age. The important necropolis of Chiavari is also attributed to this era.

From the Bronze Age, a series of settlements at higher altitudes have been discovered, some of which have been systematically explored.

Initially, the Ligyes or the Ligure populations occupied a large area that was stretching from southern France to the rivers Serchio, Po, and Ticino. Their presence is documented throughout the northern Apennine arch up to the Tyrrhenian Sea, including both slopes of the Western Alps. These populations came in contact with the Etruscans, Phoenicians, and Greeks in the third century BC and divided themselves into two groups, the Genuates, who allied with Rome, and the tribes of Riviera di Ponente who deployed with Carthage.

Regardless of the political orientation, the fate of these populations was shaped by the Romans, beginning with the occupation of Clastidium in 222 BC. The Roman colonization continued with the submission of most Ligurian tribes, followed by the construction of the main communication arteries, such as Postumia, Aemilia Scauri, and Julia Augusta.

These main stages of the Roman colonization of the region also included part of Piedmont and concluded with the establishment of the IX Augustus region. The main centers of the new colony were Genoa, Vado Ligure, Portofino, Ventimiglia, Luni, Albenga, and Sestri Levante.

After the fall of the Roman Empire, Liguria became the first region that fell under the domination of the Goths, then it became a Byzantine province in 538 AD. The region received the name of Italorum Maritime Province and its economic development was based on commercial activities.

Around the middle of the seventh century, Liguria became subject to the Longobard domination. During this period, the region had to face fierce attacks from the Saracens and Normans, especially along the coast. These violent raids led to the development of a more powerful defensive system, and towards the middle of the tenth century Berengario II divided Liguria into three regions, Obertenga, Aleramica, and Arduinica.

The two subsequent centuries had an even greater impact in the division of the centers, and a large number of more or less extensive feuds emerged in Liguria and adjacent regions.

Taking advantage of the many conflicts present in the region, Genoa started to extend its territory in an attempt to subdue the entire area up to the two coasts. In fact, the city managed to establish its landmarks in Taggia, San Remo, Portovenere, Ventimiglia, and Porto Maurizio.

During the thirteenth century, Genoa continued to extend its territory and in 1284 succeeded to defeat the fleet of Pisa at Meloria. The struggle for supremacy was not easy, as the centers of Riviera di Ponente allied with Frederick II and Charles of Anjou against Genoa.

In the meantime, Genoa collapsed after the establishment of Simone Boccanegra in 1339, followed by the domination of Giovanni Visconti, Charles VI of France, the Marquis of Monferrato and the rivalry with Venice.

Nonetheless, despite these unfortunate events, Genoa triumphed over Savona in 1528 and Liguria found its almost complete unity under the vigorous government of Andrea Doria who inaugurated a philosophical policy.

Soon after the fall of the Doria government, Liguria was attacked by the French, then occupied by the Austrians in 1746. In 1797, following the French Revolution, the Republic of Genoa disappeared and the Republic of Liguria emerged. However, this newly emerged republic was divided by the French Empire into three departments, Montenotte, with the capital at Savona, Genoa, and the Apennines, with the capital at Chiavari.

In 1815, as a result of the Congress of Vienna, it was decided to annex Liguria, under the name of the Duchy of Genoa, to the Kingdom of Sardinia.

During this century, Liguria was an active region in the Risorgimento movement. In fact, its role in the movement is noteworthy especially thanks to personalities such as Giuseppe Mazzini, Ruffini brothers, Nino Bixio, and other important figures.

Genoa also constituted the departure point for the unfortunate undertaking of Carlo Pisacane in the Kingdom of Sicily, not to mention the expedition of the thousand, led by Garibaldi, to the conquest of southern Italy in 1860. In the same year, the region was annexed to the Kingdom of Italy.

The history of the post-united Liguria, while merging with that of Italy, preserves some remarkable peculiarities. One of them is linked to Genoa, which after the annexation to the Kingdom of Sardinia, became the natural port of Piedmont. Nonetheless, the city benefited from the great economic reforms during the Cavour decade. In this period, Genoa received an extraordinary impulse towards the renewal of its ancient naval and shipbuilding tradition and acquired a leading function in driving the development. At the same time, Genoa also became the center of new political and social ties.

The policy of the fascist regime in the post-war period wanted to increase the urban planning of the city, and Genoa received the role of the main pole of public industry. The aim was that of creating a “great” industrial Genoa with an irreparable altering of the natural and urban landscape.

As part of the Milan-Turin-Genoa industrial triangle, the city participated in the post-war reconstruction. Genoa developed even further in the twentieth century, strengthening its port activity and becoming one of the main manufacturing areas in Central Italy.

Liguria is a region rich in archaeological testimonies and artifacts. Some of the most important are a few series of necropolises found at Chiavari and dating back to the Iron Age. Their tombs are made in stone and shaped as enclosures, not to mention the large variety of funeral artifacts.

Genoa also has a burial site that was used between the fifth and third centuries BC. Some fascinating statues imported from Greece have been discovered in the area.

From the Roman age, the remains of some important communication routes have been discovered, such as Postumia, Aemilia Scauri, and Julia Augusta.

Among the most important archaeological sites, the most noteworthy are Albintimilium and Luni, the oldest Roman colonies in the Ligurian territory.

Numerous artifacts and testimonies belonging to both prehistory and history are also present in the many National or Regional archaeological museums throughout the territory.

Eat as much fresh seafood and pesto as you can!
Tommaso's Liguria Travel...