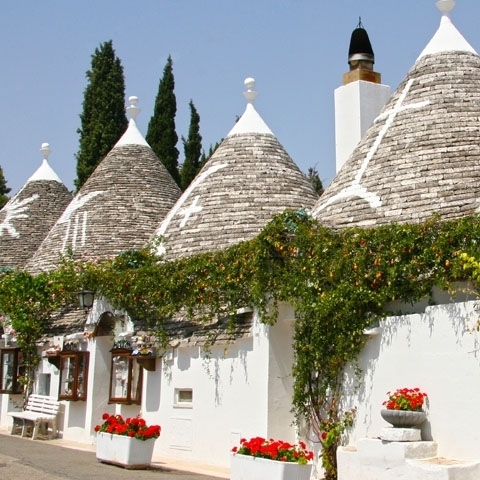 This description page of Alberobello, in the Italian region of Apulia, will guide you planning your trip to Italy and help find useful travel information about the History of this Italian city.

Alberobello started life as a farming community in the 1500’s, but wasn’t formally organized until 1654, when a count’s attempt to cheat the government created the town. Count Giangirolamo Acquaviva was called to court to explain to the king why he wasn’t paying taxes on the all dwellings in estates. He protested that there were no such dwellings, and invited the court to views his properties. Before the court representative could arrive, the Count had the dwellings destroyed and sent the people to live in the woods until the review was complete. After the court left satisfied, the people were permitted to return, as long as they only built dwellings that could be quickly torn down. Thus, the Trulli were born. Built without mortar, they were built by stacking brick upon brick, and could be demolished by removing the center support.
Life continued in this town under feudal rule until 1797, when the citizens applied to the King and were granted permission to be released from bondage and made a free town, loyal to the king.
They no longer needed to worry about having their homes demolished, but continued to create their homes in the traditional Trulli style.